Extensive insights into the Growth of Organoids Market amidst COVID-19

Organoids are organ-like, three-dimensional tissues that are developed by culturing stem cells. They are similar in structure and function to the actual organs, which makes them suitable for various research purposes. Organoids are created through 3D cell culture technology which is much more advanced than 2D cell cultures as they display organ specific cell functions. The market for organoids is a comparatively new market and has a high potential for growth in the upcoming years.

The organoids market is anticipated to record a significantly high CAGR over the forecast period, i.e., 2019-2027. The market is segmented by product, by application and by region, out of which, the product segment is further segmented into intestinal organoid, neural organoid, hepatic organoid, pancreatic organoid and others. These organoids are all being developed for the purpose of research and clinical testing. However, intestinal and neural organoids are estimated to witness the highest demand in the market. On the basis of application, the market is segmented into biomedical research, drug discovery, cancer research and others. Out of these, the biomedical research segment is anticipated to hold the largest share in the organoids market on account of increasing research and development activities for medicines and treatments at various healthcare institutions. 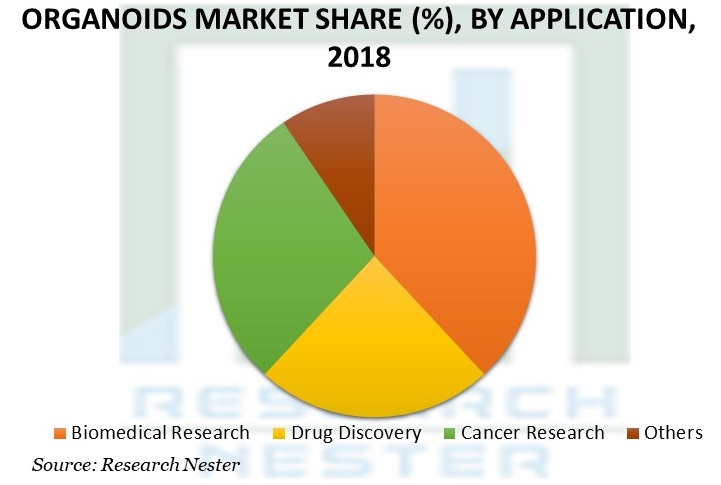 Moreover, the cancer research segment is anticipated to grow at a significant rate owing to the rising incidences of cancer and the growing demand for oncology treatments. According to the National Cancer Institute, the total funding on cancer research amounted to USD 5,636.4 million in 2017, which was a significant increase from the research funding of USD 5,206.2 million in 2016 by the institute. Organoids allow researchers to study cancer and the effects of its medications in an accurate manner. Further, the study of genetic changes occurring in cells can be done properly if the genetic composition of the organoid matches the patient’s cells, which is another factor predicted to drive the segment growth. CLICK TO DOWNLOAD SAMPLE REPORT 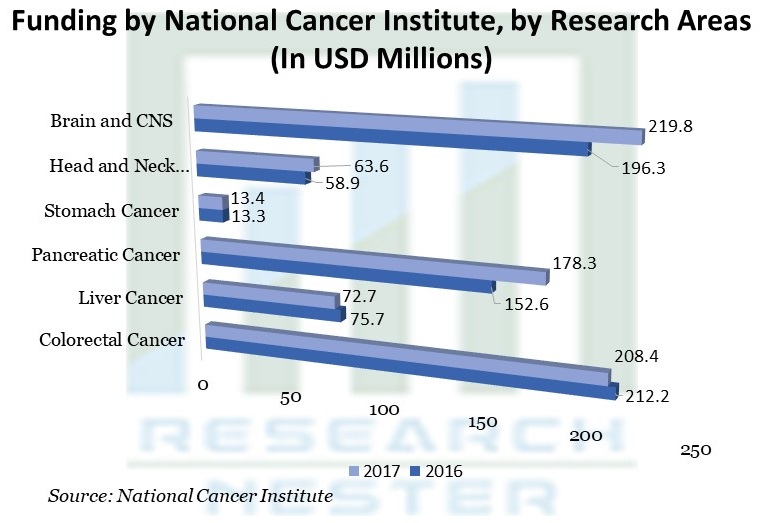 Stem-cell derived organoids which are similar to the human organs are increasingly being developed in research labs. These organoids can be used to replace animals that are being used for research and testing in various industries, mainly cosmetics and pharmaceutical. Another benefit of using organoids is that it mimics the human organs which provides highly accurate results during research. On the basis of these factors, the organoids market is anticipated to witness a surge in growth in future.

The discovery of modern forms of medication requires the application of 3D cell cultures and organoids. This further eliminates the need for preclinical testing procedures, which leads to a substantial reduction in the costs. On account of these factors, organoids are predicted to replace the conventional research and drug discovery methods, resulting in a rising demand for organoids over the forecast period.

Lack of Experienced Researchers to Impede the Market Growth

The market for organoids has not been completely established since organoids are a moderately new invention. Additionally, the dearth of skilled researchers and professionals involved in the development of organoids further restricts the creation of organoids at a faster pace. On the back of these factors, the market is anticipated to face hindrance during the forecast period.

Our in-depth analysis of the organoids market includes the following segments:

On the basis of regional analysis, the organoids market is segmented into five major regions including North America, Europe, Asia Pacific, Latin America and Middle East & Africa region. Organoids market in Europe is anticipated to witness significant growth on account of rising research activities and growing initiatives and funding by government to support them. Further, technological advancements in the medical field in European countries such as Germany and the United Kingdom are estimated to expand the market. The market in North America is anticipated to observe a lucrative growth in the coming years as a result of growing expenditure in the healthcare industry by various organizations and institutions in order to promote research. The growing awareness among people about finding an alternative to animal testing is predicted to be another growth driving factor for the market in this region, mainly in the United States.

The organoids market is further classified on the basis of region as follows: