Tea is a commonly prepared aromatic beverage which is made by pouring hot or boiling water over tea leaves. Usually, most of the tea leaves belong to the species Camellia sinensis, an evergreen shrub native to East Asia. Organic tea is the tea produced without the use of synthetic pesticides, fertilizers or herbicides. Organic tea farming usually relies on the disintegration of organic matter using methods such as composting and green manure. The cultivation process primarily focuses on the use of natural minerals and nutrients in order to nurture the growth of the plant. There are different types of organic tea, such as organic green tea, organic black tea, white tea, oolong tea, pu’erh tea, and others.

The global organic tea market is anticipated to record a notable CAGR during the forecast period, 2021-2029. The market is thriving on account of the rising awareness amongst individuals for the diseases caused by drinking non-organic tea, which is known to be treated with synthetic fertilizers, herbicides and pesticides. Further, the growing trend for organic beverages, along with the growing preference for premium beverages from several upper socio-economic classes are anticipated to promote the growth of the market in the coming years. On the other hand, rising popularity of cafes which are themed on serving different variants of tea products is also anticipated to raise the demand of the product. The market is also thriving on account of the increasing introduction of new product lines, along with the infusion of organic tea in other products, such as chamomile tea with white chocolate bar to enhance its functionality, coupled with the rising usage of organic green tea for skin care application products, such as body wash, mask and creams among others in the cosmetic industry.

The market is segmented on the basis of product type into green, black, white, oolong, pu’erh tea, and others, out of which, the organic black tea segment is estimated to hold the largest market share in the year 2022 owing to the antioxidant properties present in the type of tea which raises its nutritional value. Organic black tea is also known for possessing numerous other health benefits, such as lowering of bad LDL cholesterol, boosting heart health, improving gut health and others. Alternatively, the organic green tea segment is estimated to foresee a notable CAGR during the forecast period on the back of the numerous benefits of organic green tea, such as improving the functioning of brain, promoting fat loss, lowering the risk of heart disease and others, along with the growing trade on green tea globally. According to the statistics by the International Trade Centre (ITC), exports of green tea in immediate packings of less than or equal to three kilos grew from USD 1.11 billion in 2015 to USD 1.21 billion in 2019. 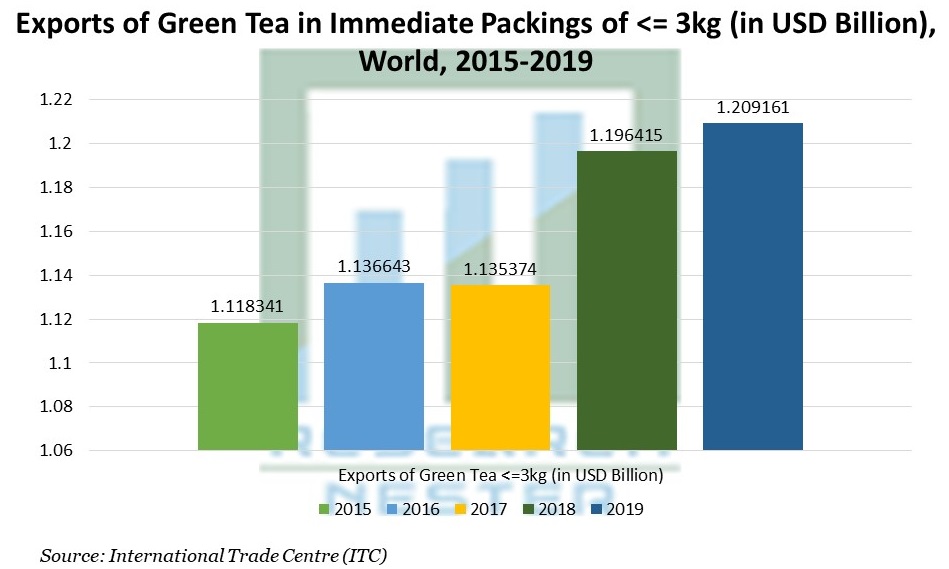 Moreover, organic green tea is known to have an abundant amount of epigallocatechin gallate (EGCG), a chemical compound which is also used widely in many dietary supplements. Such factors are anticipated to promote the growth of the green tea segment. 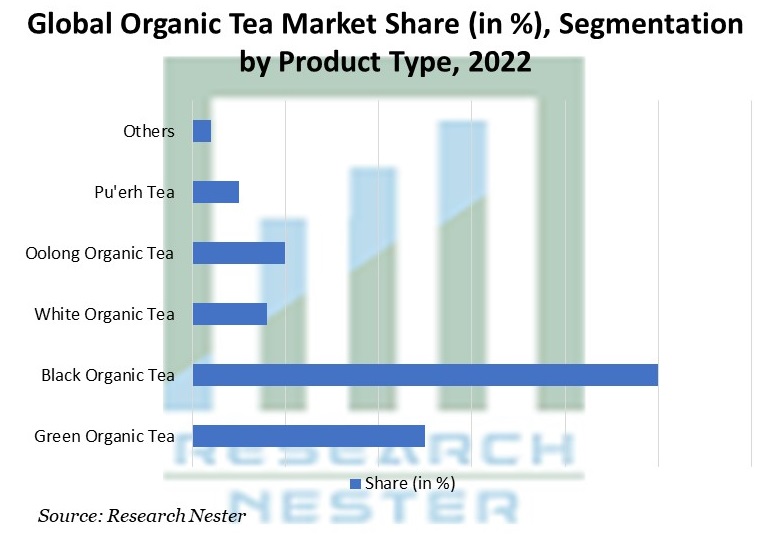 Organic tea is consumed widely owing to the numerous health benefits possessed by it. This type of tea is toxin free, which means the harmful substances used in the processing of the tea wouldn’t end up in the bodies of the user. Moreover, it is also suitable for people suffering from heart diseases and high cholesterol. Organic tea has antioxidant properties which increases the immunity and detoxifies the body and also promotes weight loss. It is also known to promote digestive health as it helps to improve the healthy gut bacteria. Additionally, it contains theanine which promotes relaxation without drowsiness. Such favorable properties of organic tea are therefore anticipated to drive the growth of the global organic tea market in the coming years. CLICK TO DOWNLOAD SAMPLE REPORT 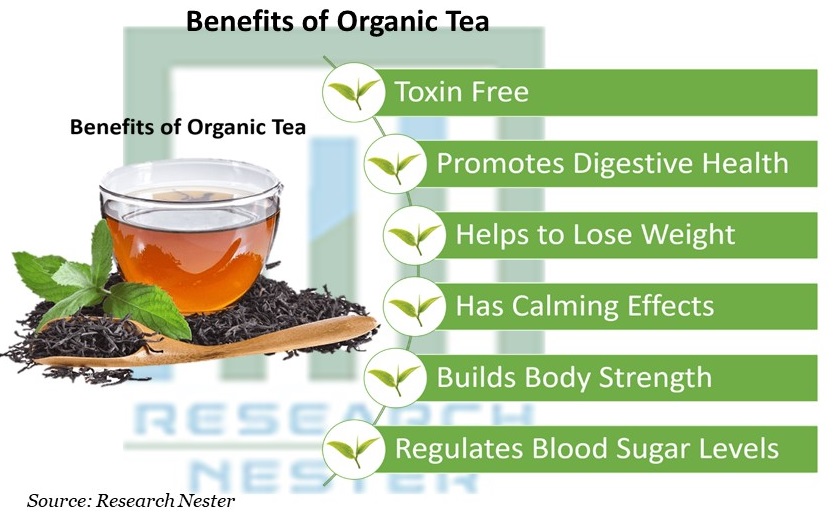 High Price of the Product to Hamper Market Growth

The price of organic tea is very high as the farming process for it is time consuming and requires greater efforts of the farmers for cultivating organic tea. Moreover, the complicated and costly equipment required for farming of organic tea also raises the price of the product. Such factors are anticipated to hinder the market growth in the coming years.

Our in-depth analysis of the global organic tea market includes the following segments:

Among these markets, the market in North America is estimated to hold the largest market share by the end of 2029 on the back of introduction of various innovative flavors of organic tea by the major key players, along with the rising inclination of people towards organic products. Alternatively, the market in Asia Pacific is anticipated to grow with the highest CAGR during the forecast period on account of the presence of nations such as China, India, Sri Lanka and others, who are world leaders in the exports of tea products. In other statistics by the ITC, China recorded the highest share of exports of 26.05% in the year 2019. Sri Lanka and India captured the 3rd and 4th highest shares with 11.18% and 10.46% respectively in the year 2019. Moreover, the organic tea market in India is projected to grow with the highest CAGR during the forecast period, backed by the increasing focus of the tea planters to grow organically produced tea. 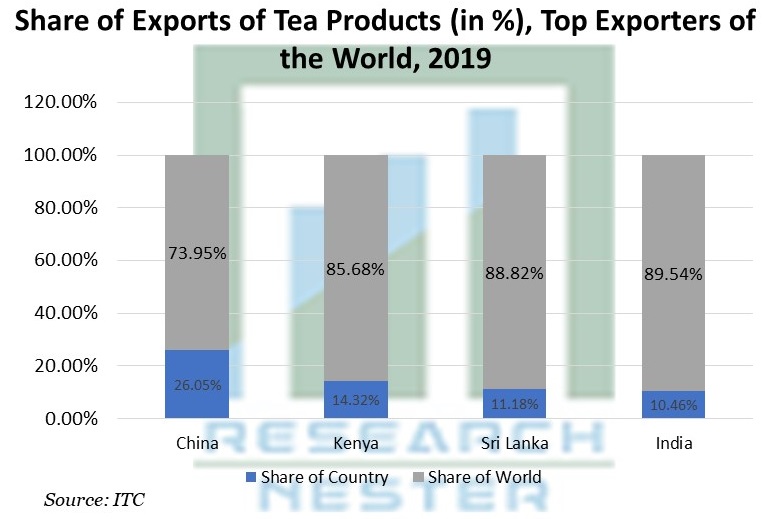 The global organic tea market is further classified on the basis of region as follows:

What are the major factors driving the growth of the organic tea market?

Growing awareness for the health benefits of organic tea is one of the major factors driving the market growth.

What would be the CAGR of organic tea market over the forecast period?

Who are the major players dominating the organic tea market?

Some of the major players in the market are Davidson's Organics, Unilever, Ecotone, Compass Tea Company, Hain Celestial, The Coca-Cola Company, PepsiCo, Inc., and others.

What are the segments in the organic tea market?

Which segment would capture the highest share in the organic tea market?

The organic black tea segment, which is a sub-segment of the product type segment is anticipated to hold the largest market share on account of the increasing preference for black tea over other tea types, backed by the presence of antioxidant properties.

Concerns for the high price of organic tea, backed by the high farming cost, is one of the major factors estimated to act as barriers to the growth of the market.