Organic meat is referred to the meat which is obtained from the livestock after feeding them 100% organic food. They are produced with the help of organic farming, which is all about working with nature to produce food in a sustainable way, better for animals, the environment and for humans. Organic meat is thus obtained from animals or birds raised in an organic system and their growth maintained by sound hygienic nutrition. There are strict standards for organic farming e.g. during the entire process the livestock is prohibited from the use of synthetic fertilizers, additives, pesticides, growth regulators and are regularly inspected by certifying bodies. This regulation makes organic meat healthier and tastier than the conventional meat products available in the market.

Increasing concerns about meat quality and rising health consciousness as well as presence of perceived nutritional values in organic meat products are some of the significant factors boosting the market growth. The organic meat market is anticipated to record a significant CAGR over the forecast period, i.e., 2020-2028. The market is segmented by distribution channel into supermarket, retail stores, speciality stores and organic stores. Among these segments, the segment for supermarket is anticipated to hold the leading share in the market on account of high efficiency in managing supply chain and distribution of products in supermarkets and hypermarkets. CLICK TO DOWNLOAD SAMPLE REPORT 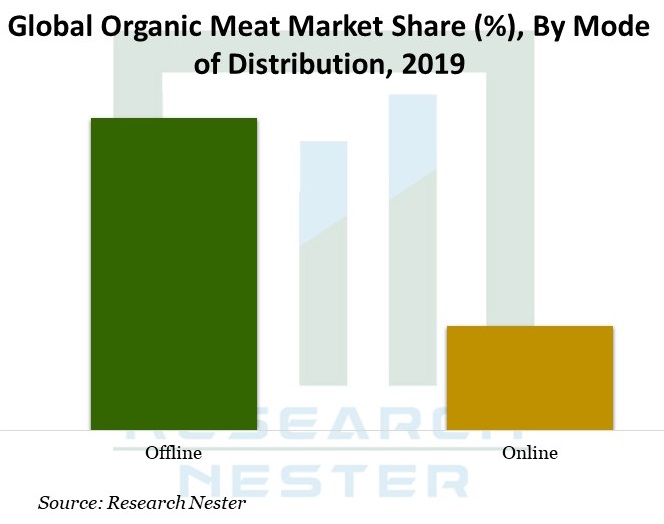 There has been a growing concern over food authenticity and detection of adulteration in various food segments on account of fraudulent substitution and mislabelling of meat products. This has resulted an extensive growth in the requirement for numerous organic products which has led to a rise in demand for organic meat. Moreover, the large-scale use of antibiotics, synthetic fertilizers and pesticides, and chemical additives during the manufacturing of processed meat have adverse effect on human health. According to the U.S. Department of Agriculture (USDA), strains of pathogens on raw beef trim are an emerging threat to foodborne illness diseases and human health. Additionally, the growth regulators given to animals contains carcinogenic substances which can increase the risk of cancer and liver damage in human body. This is anticipated to significantly expand the market.

Studies have shown that organic meat contains up to 50 percent more omega-3 fatty acids and lower concentrations of saturated fats when compared to conventionally produced meat. Owing to presence of amino acids and nutritional values, consumption of organic meat boosts the immune system, decreased the risk of heart disease and improves eye health. This factor is fuelling the growth of organic meat market. Further, on account of increasing number of health conscious people, the market for organic meat and other organic foods is expanding rapidly with an array of innovative product options. On the back of these factors, the global organic meat market is predicted to grow significantly over the forecast period.

Lack of Awareness Towards Genuine Products to Hamper the Market Growth

Despite the health benefits of organic meat, there is lack of information associated with organic labelling and authenticity in production of organic meat as per the recommended organic methods. Further, the trendy concept of veganism is shifting many consumers towards vegan diet which may negatively affect the market growth. This is estimated to hinder the growth of organic meat market in the future.

Our in-depth analysis of the organic meat market includes the following segments:

By Mode of Distribution

The market for organic meat in North America is anticipated to hold the largest share in the market on account of presence of leading market players in the region which manufacture and market organic meat. Moreover, rising consumer preference for chemical free high quality, healthy and nutritional meat from health conscious people further increases the product demand. The market in Asia Pacific is predicted to grow at the highest rate during the forecast period as a result of growing awareness among people about multiple nutritional benefits of organic meat. Additionally, several meat producing companies are keen on expanding their business, especially in countries such as China and India on account of immense growth opportunities which further raise the demand for organic meat.

The organic meat market is further classified on the basis of region as follows: