The global organic dispersants market is estimated to garner a revenue of approximately USD 8 Billion by the end of 2031 by growing at a CAGR of ~5% over the forecast period, i.e., 2022 – 2031.

Further, the market generated a revenue of USD 5 Billion in the year 2021. This growth is on the back of an upsurge in the use of organic dispersants in multiple industries such as construction, paper, petroleum, and automotive, to name a few. In the construction industry, dispersants are used as plasticizers to improve the elasticity of floorings and the flow of concrete mixtures. The growth in the global construction industry, which earned a revenue of over USD 11 trillion in the year 2020, is predicted to expand the market size. Dispersants are also used in the maintenance of equipment, and cleaning of tanks and water injection systems in oil wells. Such factors are anticipated to boost the market growth. 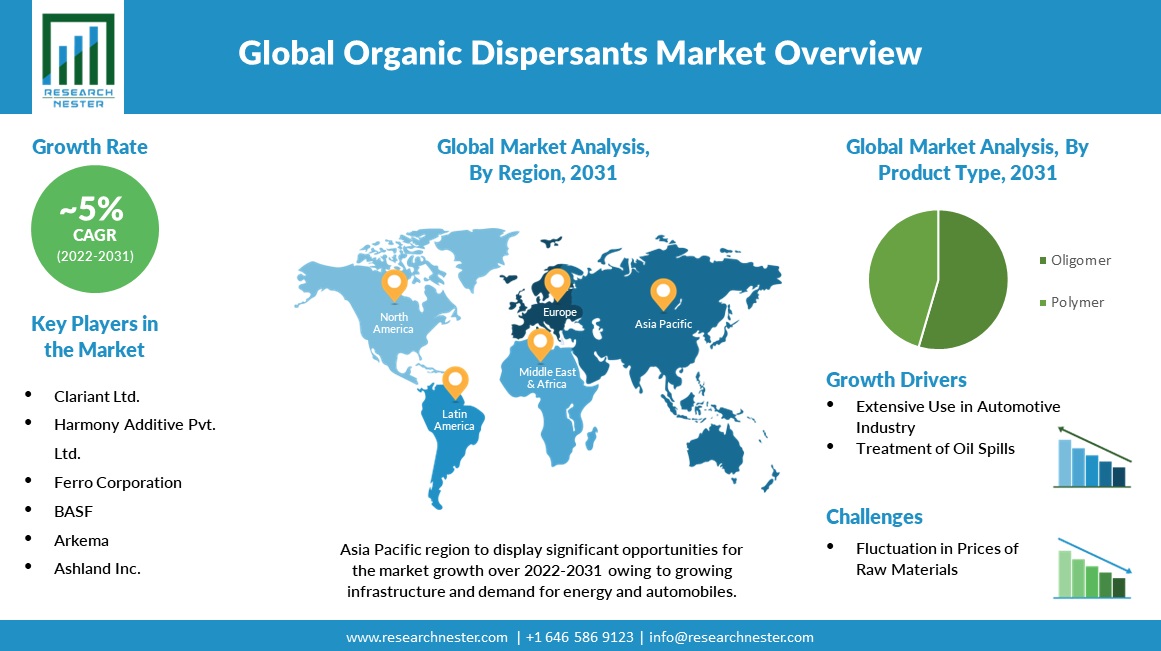 Organic dispersants are biodegradable additives that are widely used in paints and coatings to allow the dispersion of pigments during application.  In the year 2020, the global paint and coatings industry earned over USD 150 billion, as per the market analysis. Increasing demand for paints across many industries is anticipated to propel the global organic dispersants market growth over the forecast period.

The global organic dispersants market is segmented and analyzed for demand and supply on the basis of product type into oligomer and polymer organic dispersants. Out of these, the oligomer sub-segment is projected to grow at a higher CAGR during the forecast period, owing to its utility in many industries, such as, the cosmetics and pharmaceutical industries. As per the latest report, the global cosmetics industry earned over USD 370 billion. Growth of the cosmetic industry is expected to boost the market growth.

Regionally, the global organic dispersants market is studied into five major regions including North America, Europe, Asia Pacific, Latin America and Middle East & Africa region. Amongst these markets, the market in the Asia Pacific is projected to hold the largest market share by the end of 2031 on the back of growing demand for energy and automobiles in the region. The developing infrastructure due to rapid urbanization and industrialization is expected to multiply the market share in the region. For instance, the value of the construction industry in India is estimated to reach to about USD 1.4 trillion by 2025. On the other hand, the market in the North America region is anticipated to garner a significant share over the forecast period, owing to the growing investment in oil drilling activities. 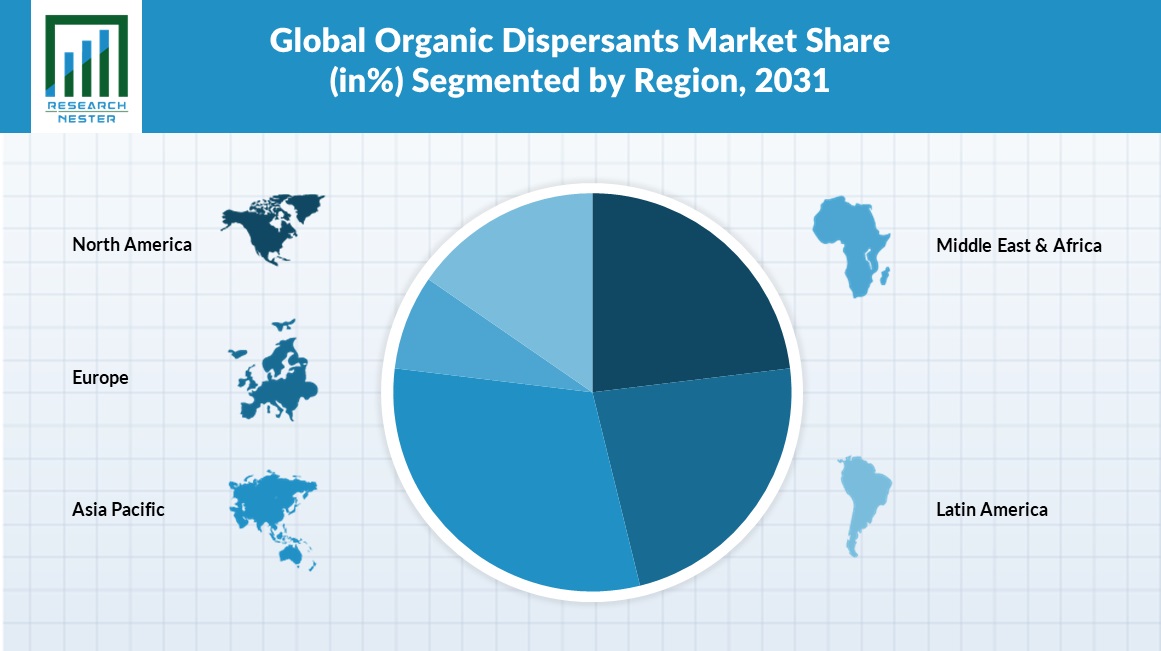 The global organic dispersants market is further classified on the basis of region as follows:

Our in-depth analysis of the global organic dispersants market includes the following segments:

What are the major factors driving the growth of the organic dispersants market?

Growing demand for organic dispersants in industries like construction, oil & gas, agriculture, and automotive, and its use in the treatment of oil spills are some of the driving factors.

What would be the CAGR of organic dispersants market over the forecast period?

What are the challenges affecting the organic dispersants market growth?

Fluctuation in prices of raw materials, stringent government regulations in some developed countries, and slower pace of innovation in developing countries are some of the challenges affecting market growth.

Which region will provide more business opportunities for growth of organic dispersants market in future?

Who are the major players dominating the organic dispersants market?

What are the segments in the organic dispersants market?

The market is segmented by product type, application, end-user, and by region.

Which segment captures the largest market size in product type segment in the organic dispersants market?

The oligomer organic dispersants sub-segment is anticipated to garner the largest market size by the end of 2031 and display significant growth opportunities.