The global opioid dependence treatment market is estimated to garner a sizeable revenue by growing at a significant CAGR over the forecast period, i.e., 2022 – 2031. The growth of the market can be attributed to the increasing number of cases of opioid abuse and addiction among people across the world, and favorable reimbursements for smoking cessation therapy. According to the World Health Organization (WHO), 275 million in the world used drugs at least once in 2019. Amongst the, 62 million people used opioids, and 36.3 million suffered from drug use disorders. Along with these, government initiatives to spread awareness about drug abuse and the significance of addiction treatment is also expected to drive robust growth to the market in the years to come. Furthermore, increasing investments by pharmaceutical companies to introduce novel products to treat opioid dependence, and upsurge in the number of rehabilitation treatment clinics globally are projected to offer ample growth opportunities to the market in the near future. 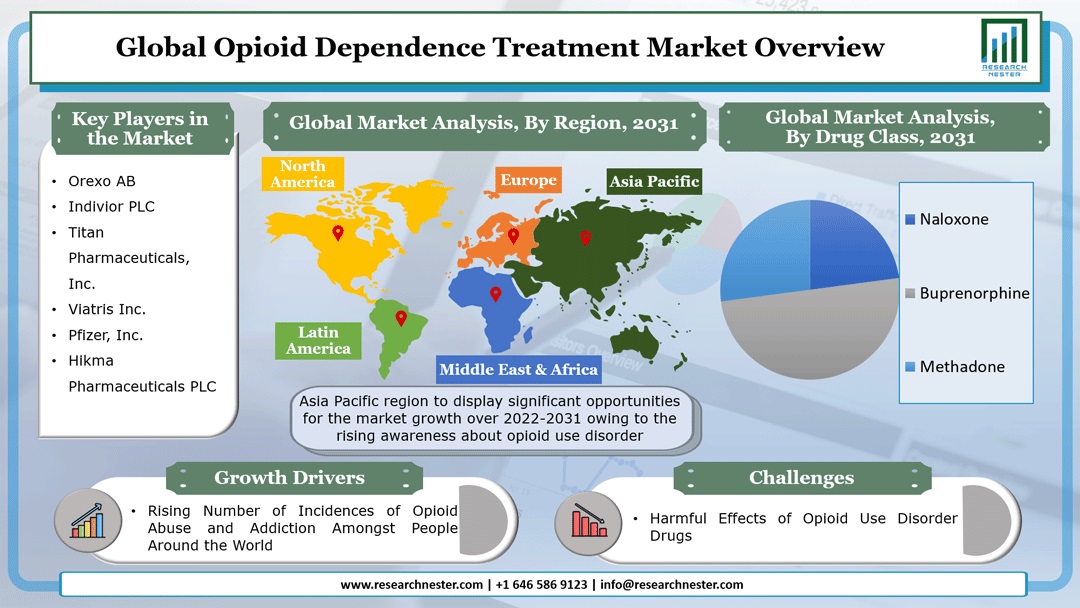 The market is segmented by sales channel into retail pharmacies, online pharmacies, hospitals, and rehabilitation centers, out of which, the hospitals segment is anticipated to hold the largest share in the global opioid dependence treatment market. This can be accounted to the high dependence of the patient population on hospital settings for the administration of parenteral drugs, namely buprenorphine. Apart from this, the online pharmacies segment is assessed to acquire the largest share over the forecast period owing to the high convenience for drug acquisition attached to these pharmacies. Additionally, on the basis of drug class, the buprenorphine segment is predicted to grab the largest share during the forecast period in view of the growing usage of buprenorphine patches to treat opioid use disorder, as these are pain-free and self-administrable. CLICK TO DOWNLOAD SAMPLE REPORT

Regionally, the global opioid dependence treatment market is segmented into five major regions including North America, Europe, Asia Pacific, Latin America and the Middle East & Africa region. The market in Asia Pacific is estimated to witness noteworthy growth over the forecast period on the back of the growing awareness among general population about opioid use disorder, and large patient pool in the region. As per the U.S. Department of Health and Human Services, as per a survey conducted in 2019, 10.1 million people aged 12 years or older misused opioids in 2018, whereas 9.7 million people misused prescribed pain relievers. Moreover, the market in North America is expected to acquire the largest share during the forecast period owing to the increasing number of people suffering from opioid dependency, and high emphasis of government to tackle the same. In addition, high healthcare spending is also projected to boost the market growth in the region in the coming years. 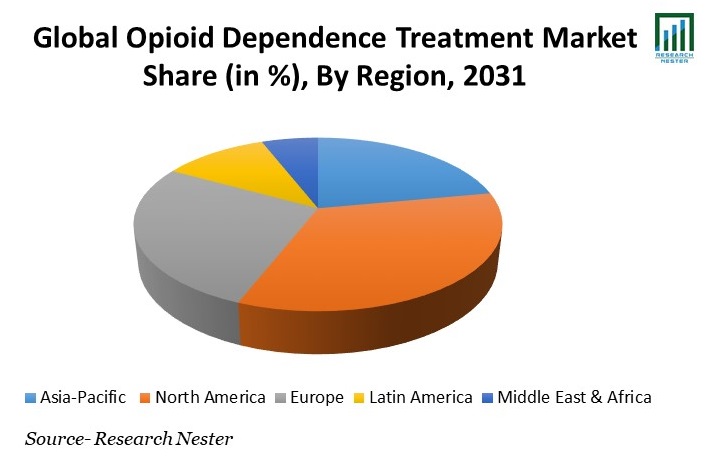 The global opioid dependence treatment market is further classified on the basis of region as follows:

What are the major factors driving the growth of the opioid dependence treatment market?

The major factors driving market growth are increasing number of cases of opioid abuse and addictions among people worldwide, and favorable reimbursements for smoking cessation therapy.

What would be the CAGR of opioid dependence treatment market over the forecast period?

Who are the major players dominating the opioid dependence treatment market?

The major players in the market are Orexo AB, Indivior PLC, Titan Pharmaceuticals, Inc., Viatris Inc., Pfizer, Inc., and others.

What are the segments in the opioid dependence treatment market?

The market is segmented by drug class, sales channel, and by region.

Which segment captures the largest market size in the sales channel segment in the opioid dependence treatment market?

The hospitals segment is anticipated to hold largest market size and is estimated grow at a notable CAGR over the forecast period and display significant growth opportunities.

Side effects of opioid use disorder drugs is estimated to hamper the market growth.

Which region will provide more business opportunities for growth of opioid dependence treatment market in future?

Asia Pacific will provide more business opportunities for market growth owing to the growing awareness among general population about opioid use disorder, and large patient pool in the region.