The rental market address the clothing requirement of the consumers who cannot afford to buy designer clothes or do not willing to spend money on the clothes to be worn not more than one or two occasions, making it more affordable. Online clothing rental portals offer a wide variety of designer clothes, which can be characterized based on the color, size, brands, types of outfits, and prices. Online renting and re-commerce companies are expanding the pre-owned product industry with regards to the market competition, with pioneering solutions to cater to different segments.

The online clothing rental market is in the developing phase in which people across the regions are gaining interest in renting various types of dresses, formal wear, ethnic wear, or casual form of dresses for both men and women. Various online rental enterprises have initiated putting efforts for enhancing the market growth with the help of internet and several other advertising innovations to offer rebates on overall costing for booking the dresses in advance (a month prior to the application).

The attempt to stay competitive and rise in the specialized production leads to growth in online rental market. Furthermore, increasing exploration of shopping apparels online has become one of the most common place for the consumers due to ease of research ability and price comparison between various online websites outweigh the efforts required to physically visit the traditional stores. 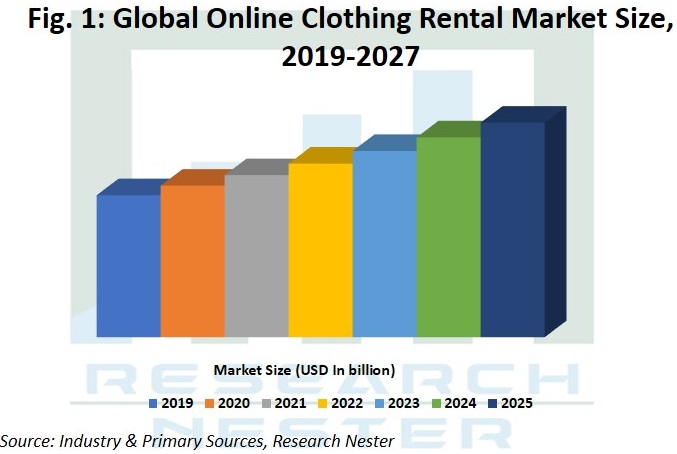 The global online clothing rental market is segmented region wise into 5 major regions comprising of North America, Europe, Asia Pacific, Latin America and Middle East & Africa. Among these regions, Asia Pacific is estimated to witness intensive market growth. The growth in the region can be attributed to the rising fashion consciousness and increased spending on fashion in the region are few factors expected to fuel the growth of the online clothing rental market during the forecast period. This can be attributed to rising adoption of mobile devices, especially smartphones and tablets across countries such as China and India.

The market in the region is projected to garner an estimated revenue of USD 623.9 billion by end of the forecast period. Additionally, the market in Asia Pacific region is expected to achieve a Y-o-Y growth rate of 12.58% by 2027 as compared to previous year. The North America market is expected to attain highest market size by growing at a CAGR of 10.1% over the forecast period. The region has an established structure for online rental industry and the consumers in the region are well aware of the online clothing renting trend. 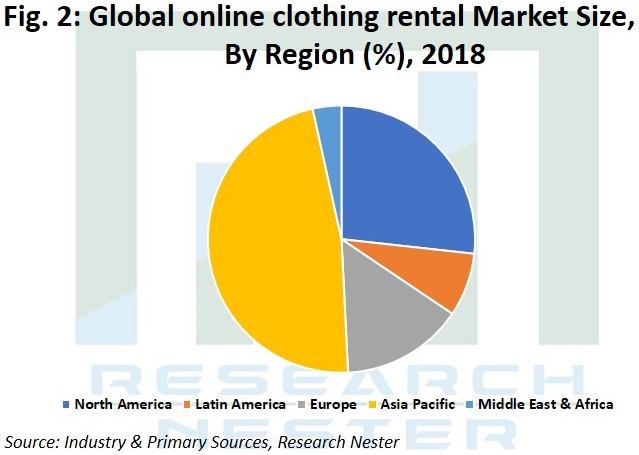 The global online clothing rental market is bifurcated by demography into men and women. Among these segments, the women segment is projected to lead and is expected to occupy a global market share of 51.70% by 2027, while growing at a CAGR of 9.7% during the forecast period. Constantly changing fashion trends among women are anticipated to propel the demand for rental clothes. Further, the market players in the region is providing rental dresses only for women majorly at a reasonable prices with different membership packages. For instance, Armoire (U.S.) is delivering its fashion wearables for all women of shapes and sizes, and even to pregnant women of different brands for only US$ 149 per month.

The global online clothing rental market is segmented non-western wear and western wear, out of which the western segment held the largest market size in 2018 and is estimated to grow significantly throughout the forecast period. On the other hand, the increasing trend of preferring ethnic clothes among the women across the globe exhibits the growth in non-western segment.

The end-user segment is bifurcated into business to consumer (B2C) and business to business (B2B). B2C segment is projected to acquire the major share of the market over the forecast period. Online rental market players are directly providing their services to consumers at a reasonable price with numerous brands options. For instance, Rent the Runway offers a broad selection of designer fashion and special event dresses from labels such as Monique Lhuillier, Marchesa, Oscar de la Renta, Rebecca Minkoff and Marni with rental price starting at just $30.

The price range segment is bifurcated into premium, medium and low range. The low range of rental clothing is projected to contribute majorly to growth of online clothing rental market. Further, medium price range is anticipated to witness highest growth in forthcoming years. The market players are providing their services to consumers at a medium price with attractive membership plans. For instance, Le Tote offers monthly membership plans starting at $69 per month for classic items and $79 per month for maternity wear.

The advancement in mobile internet technology has driven the demand for online shopping by making the process even more convenient. This will increase the awareness of online clothing rental among the consumers and this will further propel the growth of the market over the forecast period. There were around 4.39 billion internet users in January 2019, an increase of 366 million (9%) versus January 2018. Consequently, the adoption rate of rental clothing across the globe is significantly expanding which is anticipated to propel further during the forthcoming decade.

Various government initiatives, such as Start-up India by the government of India, encourage entrepreneurs to come up with innovative ideas. These start-ups offer rental services at a very low cost so as to enhance customer experience. Many manufacturers offer high end designer clothes with added benefits such as free trials at home, which is considered as another major factor behind the positive growth of global online clothing rental market across world.

The lack of awareness regarding clothing rental among lower income group in developing countries is estimated to play as the key factor in limiting the growth of global online clothing rental market over the forecast period. Further, the low penetration of smartphone in various developing countries such as Bangladesh, Kenya is further hampering the market growth in forthcoming years.