Increased power consumption owing to growing demand for energy has shifted the attention towards the replacement of conventional sources with renewable energy sources, such as offshore wind energy. Offshore wind energy is a clean, carbon- free renewable source of energy generated by offshore wind turbines that are installed at sea and is either anchored to a seabed or mounted to a floating surface. The energy is obtained due to the force of the wind produced on the high seas and is produced approximately twice onshore counterparts. This can be attributed to higher and more consistent wind speeds along with absence of any sort of barriers.

Offshore wind turbines convert the kinetic energy from sea wind into mechanical power which is further used to generate the electricity. Wind turbines used are generally fixed or floating and almost all currently operating offshore wind turbines being used are fixed, however, floating wind turbines are still at the pilot stage. The development of new technology and foundation that would allow the installation of these wind turbines further away from the coast in the upcoming years will make its utilization more economical along with increased power generation.

The market has observed a significant growth on account of abundant, faster and steadier wind present over the sea surface that makes it more reliable source of energy. Additionally, offshore wind generates clean energy and does not emit any environmental pollutants or greenhouse gases are also among major factor propelling the growth of the market. Also, offshore wind turbine components are easier to transport as they are transported by ships and barges, that reduces some of the logistic challenges encountered by land-based wind components due to their transportation through narrow roads and tunnel which is also anticipated to positively impact the growth of the market.

The global offshore wind market is anticipated to record a CAGR of Around 17% over the forecast period i.e. 2019-2027. The market is segmented by component type into turbine, substructure, electrical infrastructure, and others , among which, the turbine segment is anticipated to dominate the global offshore wind market on account of advancement in wind turbine technology which is not only enhancing the efficiency but also reducing the overall cost of production of energy. 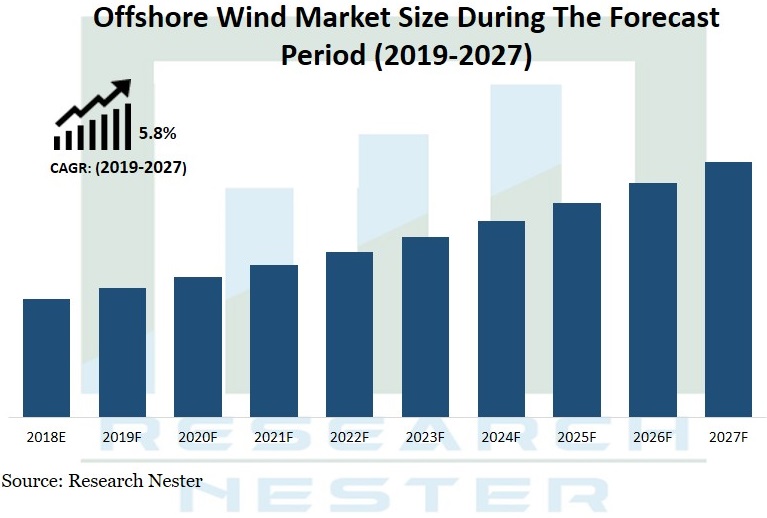 Offshore breezes are typically stronger during the day, resulting in more stable and efficient energy production when consumer demand is at peak. This is estimated to drive the growth of the market during the forecast period.

Supportive government regulations regarding the shift toward renewable energy resource and numerous policies encouraging the adoption of resources that prevent environmental degradation leading to reduced emission of greenhouse gases is also anticipated to foster the growth of the market.

Numerous governments across the world have defined wind energy targets to strengthen the usage of cleaner energy. For instance, UK has planned to get approximately 30% of its electricity from offshore winds by 2030.

A few Components required for the installation of an offshore wind power farms include high cost. Installation also require significant amount technological expertise along with ample amount of infrastructure and maintenance which is expected to hamper the growth of the market.  Moreover, adverse effect to marine life and corrosion or oxidation caused due to high humidity and salty sea water is also projected to dampen the growth of the market.

The market in Europe, particularly in northern Europe (Germany and the United Kingdom) is projected to show a notable growth over the forecast period. Germany and United Kingdom together account for over two third of total offshore wind power installed worldwide. Government regulations encouraging offshore wind power generation along with reduction in cost with the application of new technology in these countries are among the major factors expected to drive the growth of the market throughout the forecast period. According to World Economic Forum, in 2018 around 136 new wind turbines with a capacity of 0.96 GW were installed in North and Baltic Sea in the Germany making it second biggest offshore wind market in the world after the United Kingdom.

The market in China is also anticipated to witness a considerable growth owing to increase in energy consumption in the country which in turn leads to the adoption of offshore wind energy.

The global offshore wind market is further classified on the basis of region as follows: