Offshore AUV & ROV Market By Battery type (Lead-Acid/AGM/Gel battery and Lithium battery); by current carrying capacities (Less than 8A, 8 A to 20A, 20A to 30A and More than 30A ); by working type (PWM (Pulse Width Modulation); by MPPT (Maximum Power Point Tracking), Simple 1 or 2 stage controls) - Global Demand Analysis & Opportunity Outlook 2027

ROV (remotely operated vehicle) and AUV (Autonomous Underwater Vehicle) both are robotic machine, which is used in offshore platform with cameras installed in it. Human can reach to at a certain depth at sea, so to avoid this problem remotely operated vehicle or autonomous underwater vehicle is used to maintain the problems occurred at sea bottom.

For capturing the images underwater cameras are installed in AUV & ROV for getting the clear image under water and correlating the situation for platform to be installed at that location/position or not. ROV & AUV can be varied according to their size and depth up to which it can be reached to different depths at sea shore. ROV & AUV have improved the capabilities in offshore oil and gas industry. ROV can carry multiple numbers of manipulators for carrying different processes at a water depth up to 10,000 feet’s. Moreover the AUV can be glide roll or drift and vary their depth that detects the radar or navigation with GPS installed in it that helps navels for getting information’s at sea site.

The global offshore ROV & AUV market is expected to grow at a CAGR of 16.2%.till the period of 2018-2027. Rise in demand for offshore ROV & AUV system by the operators of oil and gas industry on the heels of increasing drilling operations has positively supported for the growth of market.

North America is expected to hold the largest share in market of offshore ROV and AUV market backed by increased operations for shale gas at offshore locations across the region till the expected forecast period i.e. 2018-2027.

Europe is expected to drive demand and positively impact the growth of solar charge controller market over the forecast period owing to increase demand for electricity in residential and commercial buildings, which is cost effective for them. However, weak economic conditions in countries such as Kenya, Zambia and others is expected to showcase a more modest growth of the solar charge controller market due to safety factors and cost of electricity across the region over the forecast period. CLICK TO DOWNLOAD SAMPLE REPORT 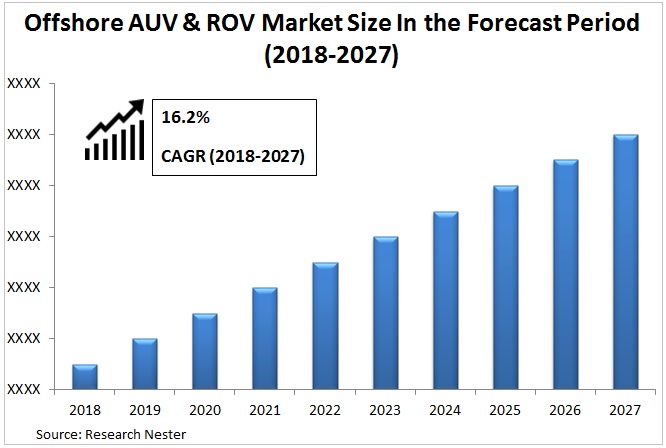 Global offshore ROV & AUV Market is further classified on the basis of region as follows: 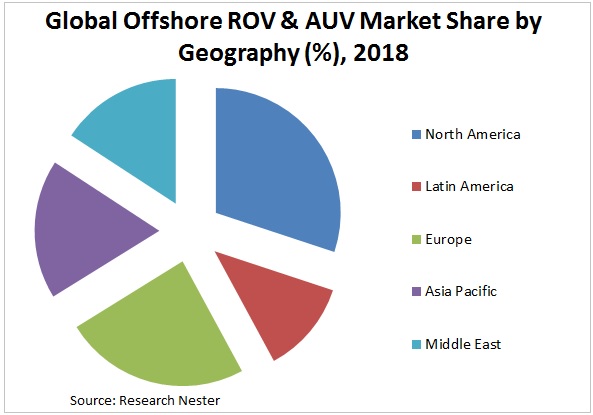 Increased reliability for offshore platforms while using the remotely operated and autonomous underwater vehicle has led the demand for offshore ROV & AUV market in the expected forecast period. Cameras installed at ROV that gives the clear image of bottom down-hole sea condition is the growth driver for this market industry.

Government policies for the safety of people and companies policy following government norms are more concern for health safety of human at underwater so by using ROV at deeper section where depth for human is impossible to reach and maintain/repair the problems related to the pipes or joints at a certain depth.

Suspicious activity at sea can be read by AUV machines and can alert the marine unit for any threat that can cause the situation of war at sea. AUV machines can glide or drift that are also capable of detecting and mapping of radars underwater rock waters.

One of the challenging factors for this market to grow is International Brent crude price affecting the operations of extracting oil and gas from the earth crust.