The global octane improver fuel additives market is estimated to garner a modest revenue by growing at a CAGR of ~3% over the forecast period, i.e., 2022 – 2031. The growth of the market can be attributed to growing significance of fuel efficiency over stringent government norms, and increasing environmental concerns regarding carbon emissions from conventional fuels and subsequent regulatory policies. 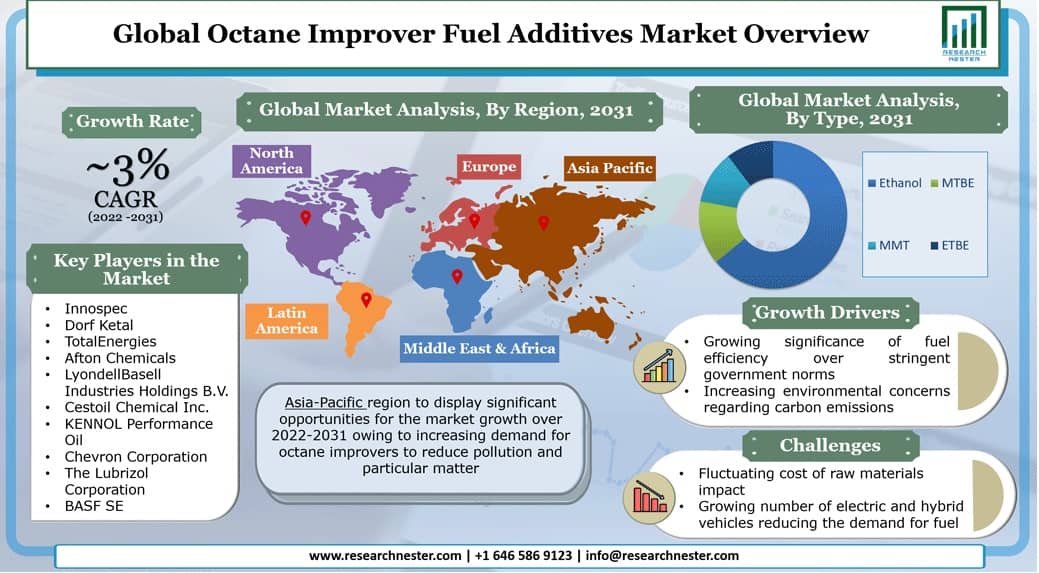 Engines require high octane level to run efficiently. Octane improver works to boost engine performance by improving fuel compression in the engine before detonation, resulting in enhanced engine power for higher efficiency. The automobile industry is expanding with increasing car sales worldwide. Global car sales was estimated to be 0ver 65 million in number in 2021. In 2019, gasoline-based cars accounted for over 75% of the global car sales.

The market is segmented by type into ethanol, methyl tertiary butyl ether (MTBE), methylcyclopentadienyl manganese tricarbonyl (MMT), ethyl tertiary butyl ether (ETBE), and others, out of which, the ethanol segment is anticipated to hold the largest share and witness highest growth over the forecast period. The growth of the segment is attributed to its characteristics such as reduction in air pollutants, carbon-dioxide emissions, and greenhouse gases.

The market is further segmented on the basis of application into automotive, industrial, aviation, and others, among which, the automotive segment is estimated to account for the largest share of the market during the forecast period on the back of high adoption rate and presence of large consumer base. The aviation segment is anticipated to witness the significant growth over the forecast period owing to increasing investments and R&D activities in the aviation sector. 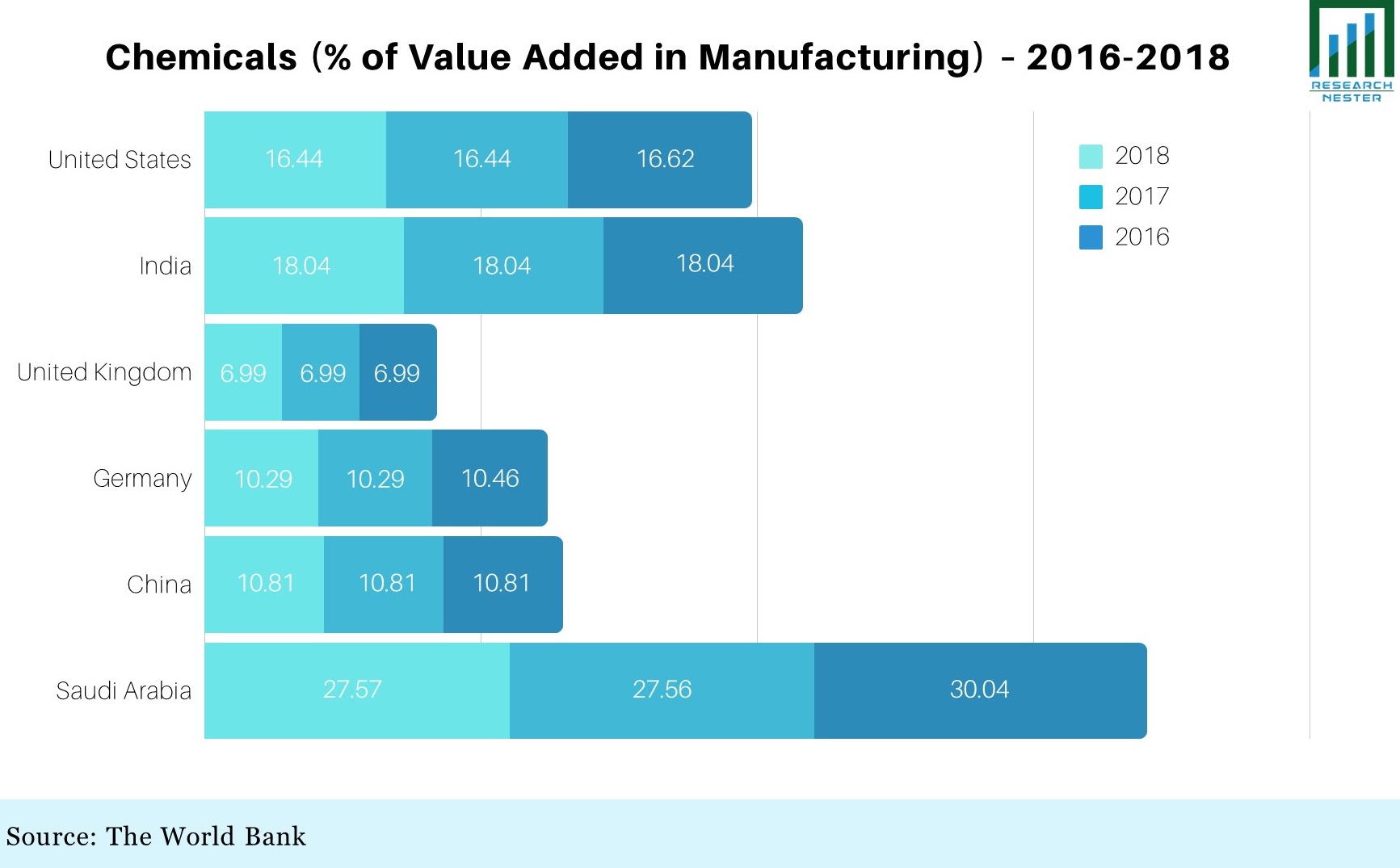 Geographically, the global octane improver fuel additives market is segmented into five major regions including North America, Europe, Asia Pacific, Latin America and Middle East & Africa region, out of which, North America is projected to hold the largest market share, with the U.S. dominating over the region since it is the largest producer of ethanol. The growth of the market in the region is attributed to increasing government initiatives to improve fuel economy, high awareness among consumers regarding the benefits of octane improvers, and stringent government regulatory framework to reduce greenhouse gases emission.

Asia-Pacific region is projected to emerge as the fastest-growing market during the forecast period owing to increasing demand for octane improvers, especially in countries such as India and China, to reduce pollution and particular matter. The high preference for petrol(gasoline)-based vehicles in India is further backing up the growth of the market in the region, providing significant opportunities for market players to invest in the region.

Latin America region is expected to witness moderate growth over the forecast period owing to high demand for fuel additives from countries such as Brazil and Argentina. Moreover, growing production of ethanol in Brazil is increasing awareness among consumers over the benefits of octane improvers, which is expected to foster the growth of the market. 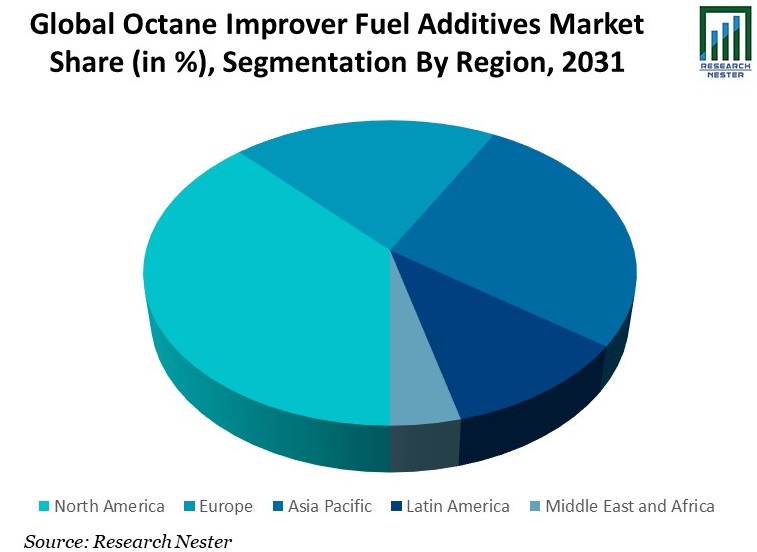 The global octane improver fuel additives market is further classified on the basis of region as follows:

What are the major factors driving the growth of the octane improver fuel additives market?

What would be the CAGR of octane improver fuel additives market over the forecast period?

What are the challenges affecting the octane improver fuel additives market growth?

Fluctuating cost of raw materials, impacting profitability of the manufacturers, and growing number of electric and hybrid vehicles reducing the demand for fuel are estimated to hamper the market growth.

Asia-Pacific region is expected to provide significant business opportunities for the growth of the global octane improver fuel additives market.

Who are the major players dominating the octane improver fuel additives market?

What are the segments in the global octane improver fuel additives market?

The ethanol segment is anticipated to hold largest market size in value over the forecast period.