The northern blot, also known as RNA blot, is a type of technique which is used in the research of molecular biology in order to study gene expression by detection of RNA in a sample. The technique allows an individual to observe a particular gene expression pattern between organs, tissues, environmental stress levels, pathogen infection, developmental stages and others.  This technique involves the use of electrophoresis, so that the RNA sample can be separated on the basis of size, as well as detection with a hybridization probe complimentary to any particular part or the entire target sequence. This involves capillary transfer of RNA from electrophoresis gel to the membrane of blotting. The northern blotting technique was developed by James Alwine, George Stark and David Kemp at Stanford University in 1977 with contributions from Gerhard Heinrich. The northern blotting name is based on a test similar to the first blotting technique known as the southern blot, which was named after the biologist Edwin Southern. Moreover, in northern blotting technique, the analysis of RNA is done instead of the analysis of DNA.

According to WHO, cancer is the second leading cause of global deaths and was responsible for an estimate of 9.6 million deaths in 2018. Northern blotting market is expected to grow with a significant CAGR over the forecast period, i.e., 2020-2028. The number of cancer cases is increasing rapidly and thus the investments in cancer related research programs are rising, ultimately estimated to result in the growth of northern blotting market. The market for northern blotting is segmented by instrument, by application, by end user and by region. The segment for instrument is further segmented into manual, automated and semi-automated, out of which, the segment for automated segment is predicted to hold the leading share and grow at the highest rate over the forecast period. This can be attributed to the less time consumption, improved automated operation with faster guidelines, and maximized cellularity even for small samples along with minimal operator errors. Moreover, the investments in biotechnology and pharmaceutical companies are rising at a significant rate on account of innovations in research and development procedures. It has been observed that the major use of the northern blotting technique is in the study of cancer. Cases of cancer are increasing rapidly across the globe and are further expected to increase the investments in cancer related research programs which are anticipated to directly boost the growth of northern blotting market in upcoming years. CLICK TO DOWNLOAD SAMPLE REPORT 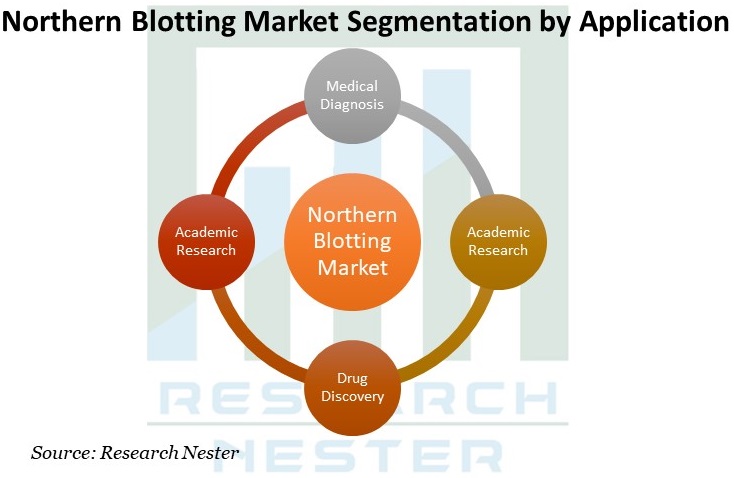 Increasing Investments In Research And Development

Northern blotting was the first mRNA detection method which was used for gene expression testing pattern in the case of human cancer. The number of cancer patients is rising rapidly and so are the investments being made in various cancer related research programs. This will increase the usage of northern blotting in the industries which, in turn, is anticipated to become a major growth factor for the northern blotting market.

Less Capacity Of Northern Blots As Compared With Microarrays

Northern Blotting Chemicals Are Considered To Be Risky For The Researchers

Chemicals such as formaldehyde, radioactive material, ethidium bromide, DEPC, and UV light are used in most of the northern blots which are harmful under certain exposures and are predicted to be risky for the researchers. This is another factor predicted to restrain the market growth in future.

Our in-depth analysis of the global northern blotting market includes the following segments:

The global northern blotting market is further classified on the basis of region as follows: