Diabetes is a highly widespread condition in which the body loses the ability to produce sufficient amounts of insulin, thereby resulting in a significant increase in the blood glucose levels. Commonly available diabetes monitoring devices work by piercing the tip of the user’s finger and using a drop of blood to analyze the amount of glucose molecules present in the blood sample.

Non-invasive diabetes monitoring devices are being developed in order to prevent puncturing of the skin while testing the blood glucose levels. The mode of action of these devices involves placement of the patient’s finger on the sensor which releases infrared beam of light that enters the skin and counts the number of glucose molecules in the blood, thereby providing the user with results in a short duration of time.

The non-invasive nature of nature of some diabetes monitoring devices is highly favorable by people and is thus increasing the demand for the product in the market. The technology required for these devices is highly advanced and is undergoing further development in the current scenario. Rising advancements in medical industry are estimated to result in the development of better and improved non-invasive technologies for blood glucose monitoring devices in both wearable and non-wearable forms.

The non-invasive diabetes monitoring devices market is anticipated to record a substantially high CAGR over the forecast period i.e. 2019-2027. The market is segmented by device, by monitoring, by end user and by region, out of which, the end user segment is further segmented into hospitals, home care, clinics and others. On the basis of end user, the home care segment is anticipated to hold the largest share in the non-invasive diabetes monitoring market on account of increased comfort of using the device at these settings. The easy availability of non-invasive blood glucose monitoring devices at pharmacies and as over-the-counter (OTC) products is a major factor estimated to considerably drive the market growth during the upcoming years. 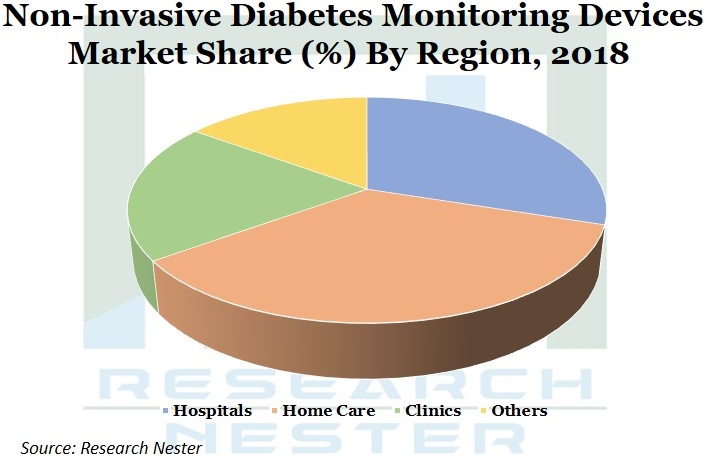 Growing Preference Of Non-Invasive Devices To Increase The Market Growth

The invasive blood glucose monitoring devices present several drawbacks as finger pricking on a daily basis is not desirable by a large number of patients. The introduction of non-invasive technique enables the users to monitor their blood sugar level several times a day. Moreover, the faster and painless procedure which is cost-effective further raises the demand for such devices. These factors are anticipated to significantly boost the market growth.

According to the World Bank, the prevalence of diabetes among the population aged between 20 and 79 was estimated to be around 8.5% in 2017. This share is further anticipated to increase during the upcoming years on account of increasing consumption of unhealthy foods and detrimental lifestyle of majority of the population across the globe. The rising incidences of diabetes around the world is a major factor anticipated to significantly impact the growth of non-invasive diabetes monitoring devices market.

The non-invasive technique that monitors blood glucose without the requirement of any blood sample is currently undergoing further development and might take some time to offer highly accurate results. Furthermore, the devices available in the market are limited in number. These factors are estimated to hamper the market growth during the forecast period.

Regional statistics on diabetes presented by the International Diabetes Federation reported that around 13% of the population between the ages 20 and 79 was estimated to be affected by diabetes in the United States in 2017.

Growing prevalence of diabetes among the population in North America is estimated to result in leading share of market in this region in global non-invasive diabetes monitoring devices market. The growth of market in this region can be attributed to the increasing adoption of unhealthy lifestyle among the population along with a rising demand for non-invasive technology for monitoring blood glucose levels.

The market in Asia Pacific region, however, is estimated to witness the highest growth rate during the forecast period on account of emerging healthcare infrastructure in the region as well as a growing number of diabetic patients in countries such as China and India. The country reports by IDF further suggested that 10.9% of the population aged between 20 and 79 years was diabetic in 2017 in China, while 8.8% of the population belonging to the same age group was diabetic in the same year in India. This was estimated to increase to 11.6% in China and 11.4% in India by 2045.

The non-invasive diabetes monitoring devices market is further classified on the basis of region as follows: