The global nicotine cessation market is projected to grow with a CAGR of 14.37% during the forecast period, i.e., 2020-2027. In 2018, the market was valued at USD 15.77 billion. Nicotine cessation involves nicotine replacement therapy which uses various products and devices that provide the smokers with much lower doses of nicotine than cigarettes. Since there is no smoke produced in this treatment, the toxins are eliminated as well.

The global nicotine cessation market is segmented by regions into North America, Latin America, Europe, Asia-Pacific and Middle East and Africa, out of which, the market in North America held the largest share in 2018. The presence of major market players for smoking cessation products and growing awareness about risks of tobacco consumption, mainly in the United States, is the key reason which explains the projected market growth. Moreover, the growing acceptance of innovative products such as electronic cigarettes as a replacement for cigarettes that contain tobacco is another driving factor for the market growth. The market in Europe is anticipated to hold the second largest share on account of adoption of healthy lifestyles by a majority of the population which is accompanied by drug intervention that promotes the use of nicotine cessation products. The countries where this change in consumer behavior is observed include Germany, France, Russia, Italy and the United Kingdom. Most of these countries have a high prevalence of both male and female smokers, which leads to the development of various chronic diseases such as infertility, lung cancer and other lung diseases. Similarly, the market in Asia Pacific region witnessed a high demand for products for nicotine cessation such as nicotine gum, tablets and transdermal patches. As a result of this, the nicotine cessation market is anticipated to grow in the next few years. 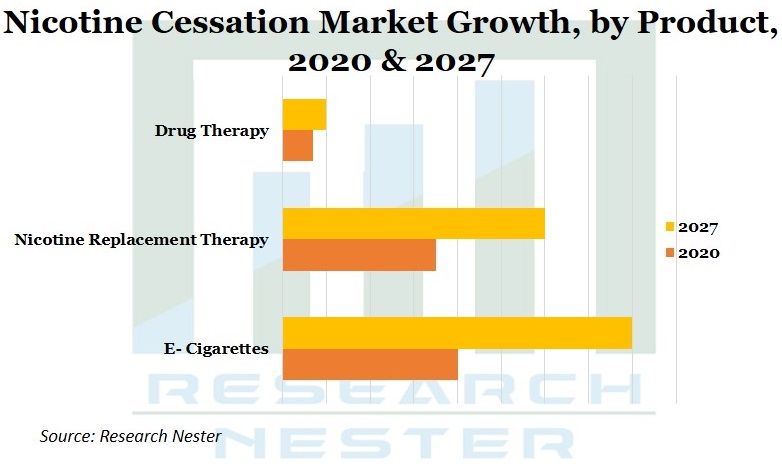 The growing demand for e-cigarettes as a substitute for conventional cigarettes in order to reduce the tobacco consumption is a major growth factor for the nicotine cessation market. The large number of people aiming to cut back tobacco use and smoking all over the world further contribute towards the rising demand for nicotine cessation products. Awareness among the population about the health risks of smoking and tobacco consumption including chronic obstructive pulmonary disease (COPD) is another factor estimated to support the market growth. Further, the restrictions on tobacco consumption as a result of government policies and regulations is predicted to positively impact the market growth.

Despite the property of nicotine cessation products to reduce the withdrawal symptoms effectively and help users with their smoking addiction, there are certain side effects produced by them that might result in irritation among people. For instance, transdermal patches and nasal sprays might cause discomfort to the user. This is estimated to significantly hamper the market growth during the forecast period. Furthermore, the limited availability of smoking cessation products in various developing and underdeveloped countries along with inclination of youth towards various tobacco products is anticipated to restrict the market growth.