·   August 2021- Yuyu Pharma and Novartis Korea entered into an agreement in which Yuyu acquired the exclusive distribution rights for 3 prescription medicines, including Tegretol, a medicine containing carbamazepine used to treat conditions including epilepsy and trigeminal neuralgia.

The global neuralgia drugs market is estimated to garner a sizeable revenue and grow at a CAGR of ~6% over the forecast period, i.e., 2022 – 2030. The growth of the market can be attributed to the growing prevalence of trigeminal neuralgia, increasing incidence rate of diabetes around the world, and rise in occurrence of diseases such as multiple sclerosis. According to the World Health Organization (WHO), 422 million people worldwide are suffering from diabetes, out of which 1.6 million people succumb to this disease every year. Along with these, rapidly growing geriatric population since the last two decades and rising governmental support regarding the manufacture of post herpetic neuralgia treatment products are also expected to drive market growth in the upcoming years. Furthermore, surge in development of healthcare infrastructure worldwide coupled with escalating disposable income of the global population are projected to provide profitable opportunities for market growth in the near future. 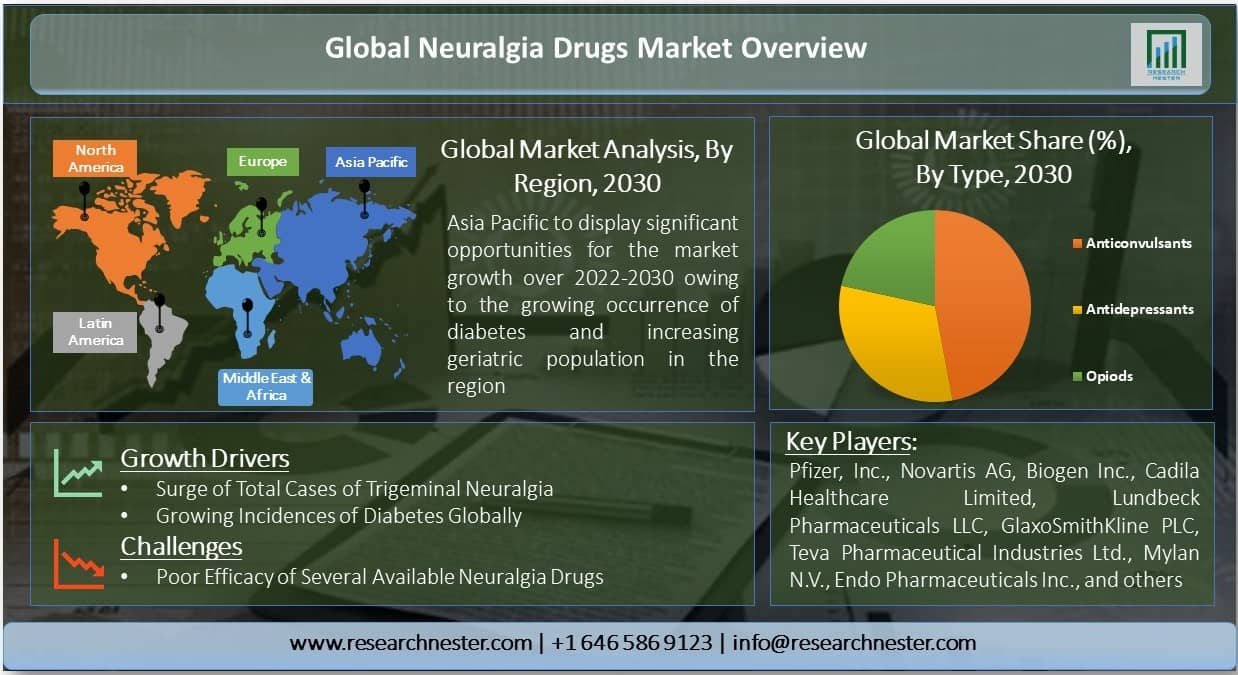 The market is segmented by distribution channel into hospital pharmacies, retail pharmacies, online pharmacies, and others, out of which, the hospital pharmacies segment is anticipated to hold the largest share in the global neuralgia drugs market on account of the fact that frequent interactions of prescriber and other health professionals are promoted in a hospital facility, and it offers improved input in making efficient drugs related decisions. Additionally, on the basis of type, the segment for anticonvulsants is estimated to acquire the largest share during the forecast period, which can be credited to the high usage of carbamazepine, which is an anticonvulsant, for the initial treatment of trigeminal neuralgia across the globe. Apart from these, effectiveness of these drugs in calming hyperactivity in the brain is also predicted to boost the growth of the market segment in the future.

On the basis of geographical analysis, the global neuralgia drugs market is segmented into five major regions including North America, Europe, Asia Pacific, Latin America and the Middle East & Africa region. The market in the Asia Pacific is estimated to witness noteworthy growth over the forecast period on the back of the increasing occurrence of diabetes and rising elderly population in the region. In addition, growing development of large specialty hospitals in countries namely China and India, is also projected to drive the region’s market growth in the coming years. Moreover, the market in North America is assessed to grab the largest share during the forecast period owing to the rising awareness associated with the availability of several treatment options, increase in healthcare spending and strong presence of prominent market players in the region. According to the National Health Expenditure Accounts (NHEA), total healthcare spending in the United States grew 4.6 percent in 2019, reaching $3.8 trillion or $11,582 per person. As a share of the nation's Gross Domestic Product, health spending accounted for 17.7 percent.

The global neuralgia drugs market is further classified on the basis of region as follows:

Our in-depth analysis of the global neuralgia drugs market includes the following segments:

What are the major factors driving the growth of the neuralgia drugs market?

The major growth drivers for the market are growing prevalence of trigeminal neuralgia and increasing incidence rate of diabetes around the world.

What would be the CAGR of neuralgia drugs market over the forecast period?

What are the challenges affecting the neuralgia drugs market growth?

Which region will provide more business opportunities for growth of neuralgia drugs market in future?

Asia Pacific will provide more business opportunities for market growth owing to the increasing occurrence of diabetes and rising elderly population in the region.

Who are the major players dominating the neuralgia drugs market?

What are the segments in the neuralgia drugs market?

The market is segmented by type, distribution channel, and by region.

Which segment captures the largest market size in the type segment in the neuralgia drugs market?

The anticonvulsants segment is anticipated to hold largest market size and is estimated to grow at a notable CAGR over the forecast period and display significant growth opportunities.