Further, the market generated a revenue of USD 27 Billion in the year 2021. The growth of the market can be attributed to an increment in the research and development of narcotics analgesics worldwide. Further, the increased use of heroin, a type of narcotic analgesic, is also expected to contribute to market growth. In 2019, more than 40,000 people tried heroin for the first time and in 2020, around 7,00,000 people used heroin. Besides this, the rise in concern for the misuse of pain killers and the myth that pure heroin is less harmful than less pure heroin forms is also poised to create numerous opportunities for market growth in the coming years. Also, a growing tolerance to non-narcotics analgesics is the major reason for the constant increase in sales of narcotics analgesics. 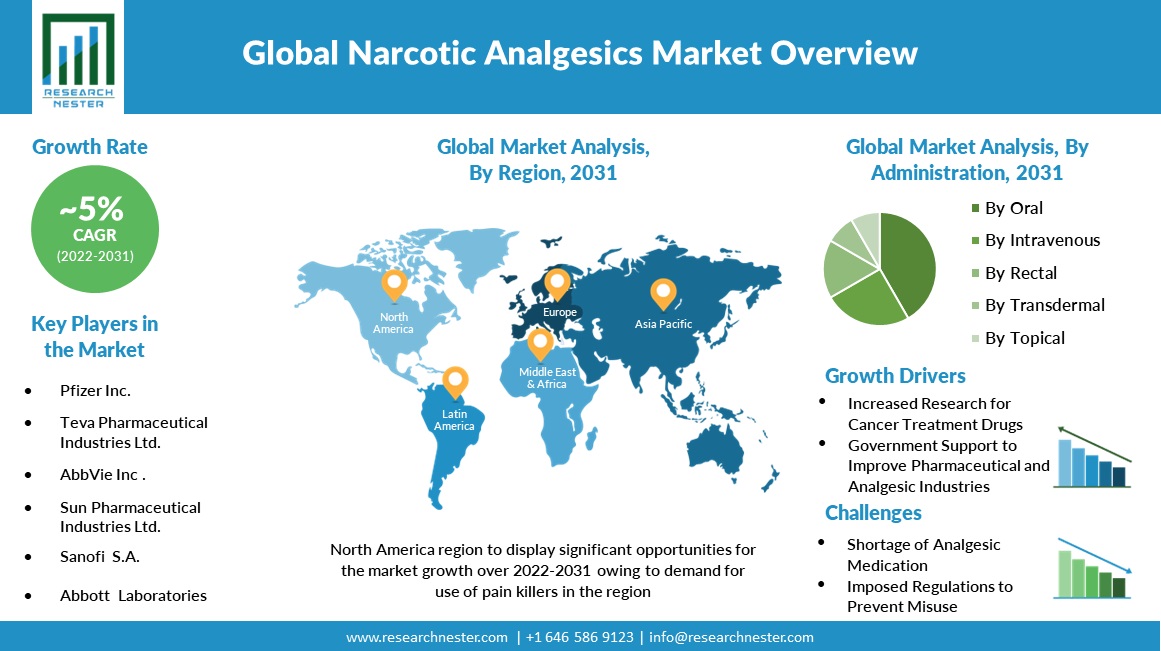 The growth of the global narcotics analgesics market can also be attributed to the quick onset of action of these pharmaceutical drugs and the high efficiency of these drugs for neuropathic pain management. In addition to this, the rise in demand for drugs for pain relief related to the central nervous system (CNS), such as morphine, is also anticipated to drive market growth. International Narcotics Control Board reported that 79% of the world’s population consumed 13% of morphine used for the management of pain and suffering or 1% out of 388.2 tons of total morphine manufactured across the world.

The global narcotics analgesics market is segmented and analyzed for demand and supply by administration route into oral, intravenous, rectal, transdermal, and topical, out of which, the oral segment is anticipated to hold the largest market share by the end of 2031. The growth of the segment can be attributed to the simple administration through the oral route, the non-invasive nature of administration, and the increased efficiency of these drugs when compared to other routes of administration. Over 80% of drugs in high demand are oral route products with a value of USD 30 billion and a growth rate of 10% annually.

Regionally, the global narcotics analgesics market is studied into five major regions including North America, Europe, Asia Pacific, Latin America and Middle East & Africa region. Amongst these markets, the market in North America region is projected to hold the largest market share by the end of 2031 on the back of an increase in demand for pain killers. Between 2015-2018 about 10.7% of U.S adults aged 20 and above used one or more prescription pain medications (opioid or nonopioid) and 5.7% used one or more prescription opioids, as per the statistics by the Centers for Disease Control and Prevention (CDC). 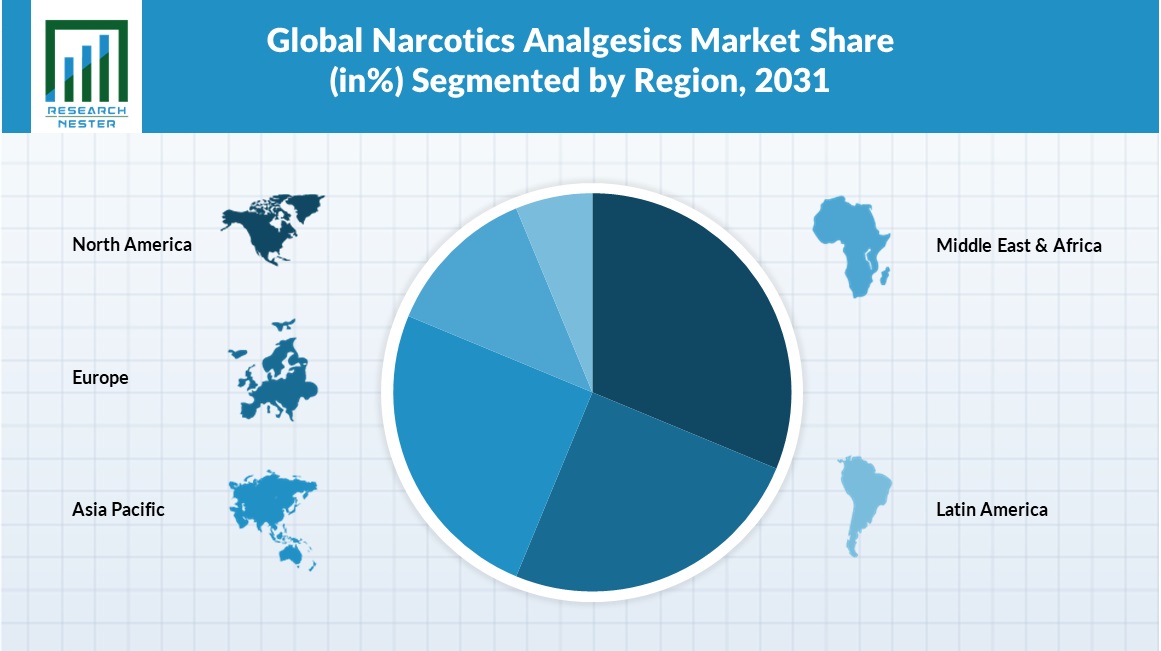 The global narcotics analgesics market is further classified on the basis of region as follows:

Our in-depth analysis of the global narcotics analgesics market includes the following segments:

What are the major factors driving the growth of the narcotics analgesics market?

Increased research for cancer treatment drugs and rising consumption of different types of drugs are the major factors driving the growth of the narcotics analgesics market.

What would be the CAGR of narcotics analgesics market over the forecast period?

What are the challenges affecting the narcotics analgesics market growth?

Shortage of analgesic medication and addiction to narcotics drugs are estimated to hamper the market growth.

Which region will provide more business opportunities for growth of narcotics analgesics market in future?

Who are the major players dominating the narcotics analgesics market?

What are the segments in the narcotics analgesics market?

The market is segmented by type, application, administration route, and by region.

Which segment captures the largest market size in the administration route segment in the narcotics analgesics market?

The oral segment is anticipated to garner the largest market size by the end of 2031 and display significant growth opportunities.