Narcolepsy is a neurological disorder involving reduction in the ability to sleep and wake. The disorder results into uncontrollable daytime sleepiness and the person may involuntarily fall asleep during any time of activity. Narcolepsy involves sudden loss of muscle tone resulting into weakness and cataplexy. Cataplexy is the problem of slurred speech and sometimes total body collapse, depending upon the kind of muscles involved. Symptoms of narcolepsy include excessive daytime sleepiness, hallucinations, sleep paralysis and disrupted sleep. There are many treatments and lifestyle changes in order to ease the symptoms of narcolepsy. Excessive daytime sleepiness is treated with stimulants such as methylphenidate and cataplexy can be treated with antidepressant drugs.

The rising prevalence of narcolepsy globally owing to the stressful lifestyle along with the surge in consumption of alcohol and tobacco is one of the major factors estimated to drive the growth of narcolepsy drugs market. The increasing demand for latest therapies to cure the disorder and rising healthcare expenditure in various emerging economies is boosting the market growth. Further, there is a significant rise in the activities of research & development for the development of highly effects drugs on the back of unhealthy lifestyle of people. Driven by these prominent factors along with the presence of reimbursement policies for Food and Drug Administration (FDA) approved medications, the market for narcolepsy drugs is anticipated to record a CAGR of around 10.2% during the forecast period, i.e., 2020-2028.

On the basis of disease type, the market for narcolepsy drugs is segmented into extreme sleepiness, cataplexia and others, out of which, extreme sleepiness is estimated to witness highest market share owing to rising cases of narcolepsy worldwide along with the other disorders. 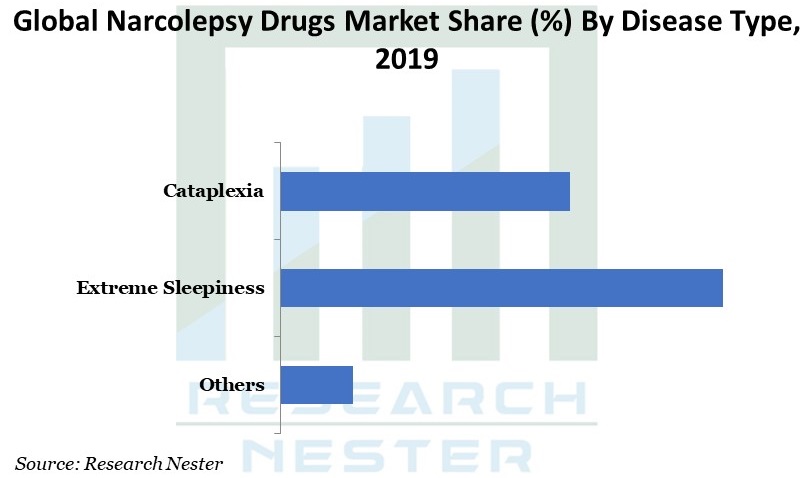 The extreme sleepiness affects most of the people and the sleep disorders leads to the rise in risk associated to the symptoms. Further, cataplexia is anticipated to grow at highest rate on the back of sudden loss of muscle control by patients suffering from cataplexia. CLICK TO DOWNLOAD SAMPLE REPORT

The active involvement of various organizations globally in order to spread awareness related to the disorder and its symptoms is propelling the growth of the market. In addition, the rising knowledge regarding the treatment of narcolepsy and sleep disorders is leading to the rise in narcolepsy awareness programs. Further, increased concerns regarding the advantages of early diagnosis of narcolepsy drugs along with the promotions by governments to educate people & trained professionals regarding disorder is accelerating the growth of the market. Therefore, these factors are estimated to drive the demand for narcolepsy drugs market during the forecast period.

Stringent government regulations regarding the agreement for narcolepsy drugs is identified as one of the factors expected to hamper the growth of the market over the forecast period.

The ill effects regarding narcolepsy drugs along with the possibility of delay in diagnosis & treatment is anticipated to hinder the growth of the market. Further, lack of acknowledgement among patients and medical care providers in developed & developing nations is restraining the market growth of narcolepsy drugs.

Geographically, the narcolepsy drugs market is segmented into five major regions including North America, Europe, Asia Pacific, Latin America and Middle East & Africa region. The market in North America is anticipated to dominate the market owing to the rising prevalence of unhealthy lifestyle along with the technological advancements for the diagnosis of disease. Further, increase in the number of narcolepsy cases leading to the rising awareness for the treatment along with rising healthcare expenditure is driving the growth of the market. The Asia Pacific region is estimated to witness fastest growth rate on the back of economic development in major nations and rising investments in biotechnology sectors. In addition, adoption of better standards of life and rising cases of sleep disorders is fostering the growth of the market. The Europe region is estimated to foresee lucrative growth on the account of rising research & development initiatives for the progress in narcolepsy novel drugs. 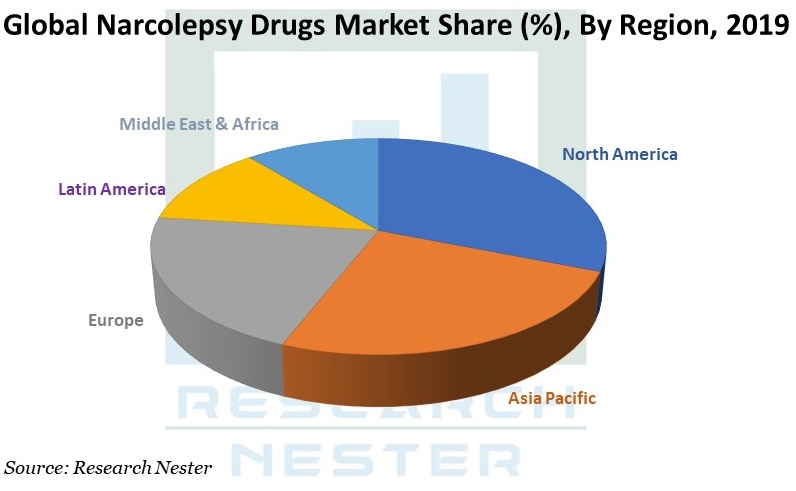 The narcolepsy drugs market is further classified on the basis of region as follows: