The global myoglobin market is estimated to garner a significant revenue by the end of 2031 by growing at a CAGR of ~7% over the forecast period, i.e., 2022 – 2031. Further, the market generated a notable revenue in the year 2021. The growth of the market is primarily attributed to the myoglobin utility as a highly accurate biomarker. For instance, it was observed in research that myoglobin outperforms other cardiac-specific biomarkers in COVID-19 diagnosis. Additionally, the increasing knowledge of myoglobin's effectiveness as a reliable indicator of left ventricular wall thickening which is also known as left ventricular hypertrophy (LVH), is driving the growth of the market in the forecast period. For instance, left ventricular hypertrophy (LVH) affects around 17% to 20% of the population. It is commonly found in blacks, the elderly, the obese, and hypertension patients. 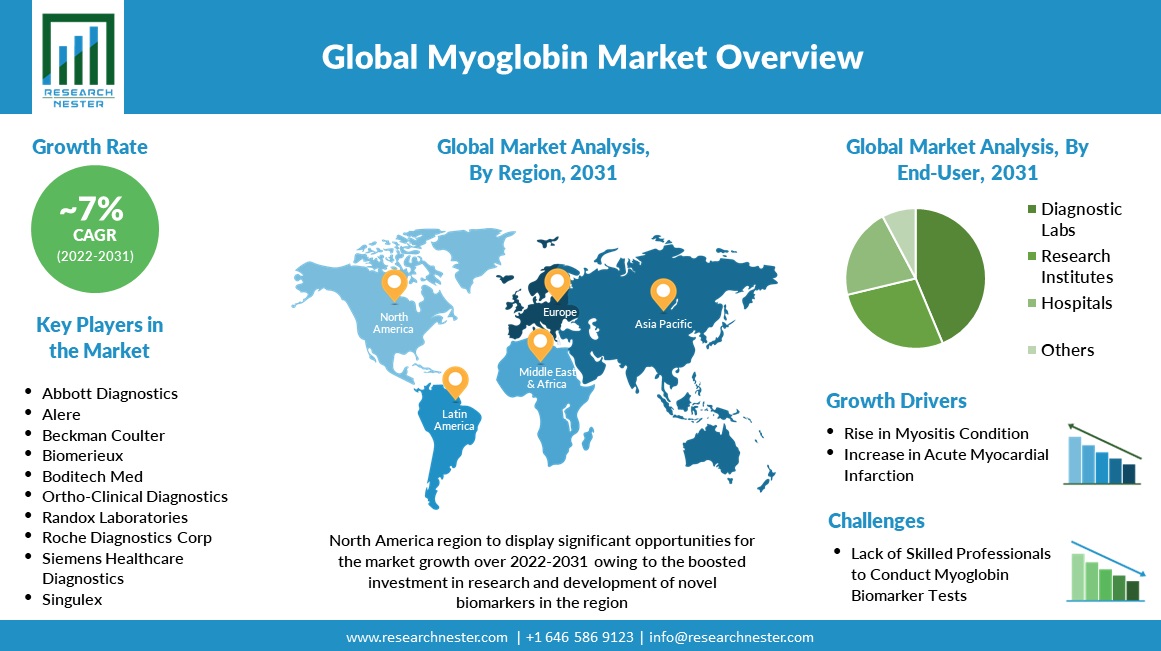 Myoglobin is a tiny heme globular protein that primarily exists in the skeletal and cardiac muscles of mammals. It is an oxygen-binding molecule. The protein's primary job is to store and supply oxygen to muscles that are working hard when blood oxygen delivery is partially inadequate. When cells get damaged, these proteins get released into the blood. It is found in many diving mammals, i.e., whales and seals, and allows them to remain submerged for a longer period of time. As an oxygen binding blood cell proteins, myoglobin and hemoglobin have very similar chemical structure owing to the existence of a molecule called heme, which is primarily responsible for allowing oxygen binding with hemoglobin and myoglobin.

The myoglobin market is segmented and analyzed for demand and supply by end-user into research institutes, hospitals, diagnostic labs, and others, out of which, the diagnostic labs segment is anticipated to significantly grow over the forecast period owing to the growing demand for better healthcare services, and presence of high-quality equipment to conduct tests. For instance, currently, there are approximately 24,825 medical and diagnostic laboratories in the United States.

Regionally, the global myoglobin market is studied into five major regions including North America, Europe, Asia Pacific, Latin America and Middle East & Africa region. Amongst these markets, the market in North America is projected to hold the largest market share by the end of 2031 backed by the rise in launching of myoglobin reagents testing kits, growing prevalence of cardiovascular diseases, and boosted investment in research and development of novel biomarkers in the region. As of 2019, cardiovascular diseases (CVDs), accounted for approximately 875,620 deaths in the United States. Furthermore, a myocardial infarction occurs in every 40 seconds. 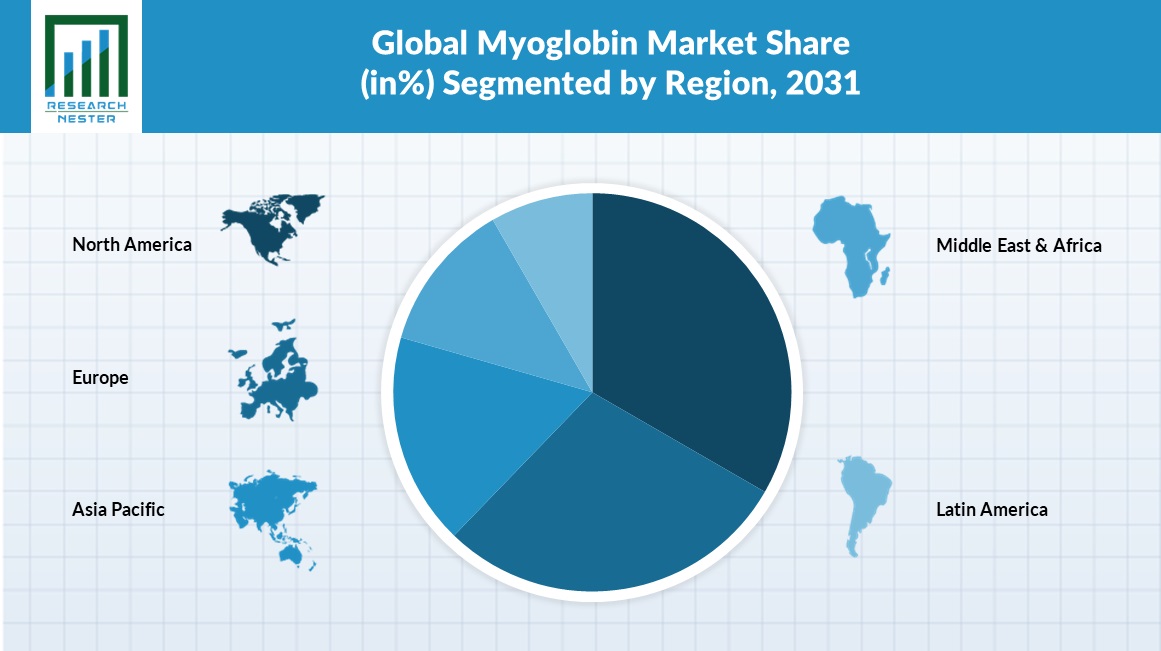 The global myoglobin market is further classified on the basis of region as follows:

Our in-depth analysis of the global myoglobin market includes the following segments:

What are the major factors driving the growth of the myoglobin market?

Rise in myositis condition, growing prevalence of cardiovascular diseases, increase in acute myocardial infarction, and escalating numbers of cardiac surgeries are some major factors driving the growth of the market.

What would be the CAGR of myoglobin market over the forecast period?

What are the challenges affecting the myoglobin market growth?

Lack of skilled professionals to conduct myoglobin biomarker tests, lack of awareness regarding myoglobin, and stringent government regulations about clinical trials are estimated to hamper the market growth.

Which region will provide more business opportunities for growth of myoglobin market in future?

Who are the major players dominating the myoglobin market?

What are the segments in the myoglobin market?

The market is segmented by product type, end-user, and by region.

Which segment captures the largest market size in end-user segment in the myoglobin market?

The diagnostic labs segment is anticipated to garner the largest market size by the end of 2031 and display significant growth opportunities.