The common symptoms of multiple myeloma consist of nausea, pain in bones, fatigue, frequent infections and weakness among several others. The proper cause of multiple myeloma is not yet known, which increases the scope of further developments in treatment methods in the market.

The American Cancer Society estimates that around 32,270 new cases of multiple myeloma will be diagnosed in 2020, out of which, 17,530 cases will be in men and 14,740 in women. Moreover, about 12,830 deaths as a result of this disorder are predicted to occur, out of which, 7,190 are estimated to be in men and 5,640 in women. The lifetime risk of getting multiple myeloma in the United States was recorded to be around 1 in 132 or 0.76%.  The rising prevalence of multiple myeloma is leading to an increased demand for effective and easy-to-administer therapies globally.

Revlimid, a drug manufactured by Celgene, is a widely-used drug for the treatment of multiple myeloma. Celgene has been generating significant revenues from the drug, which are increasing on a yearly basis and projected to increase further. In the third quarter of 2019, Celgene reported generation of revenues of USD 1,902 million from Revlimid in the United States and USD 868 million from the rest of the world. This provides profitable business opportunities for market players looking to enter the multiple myeloma therapy market. 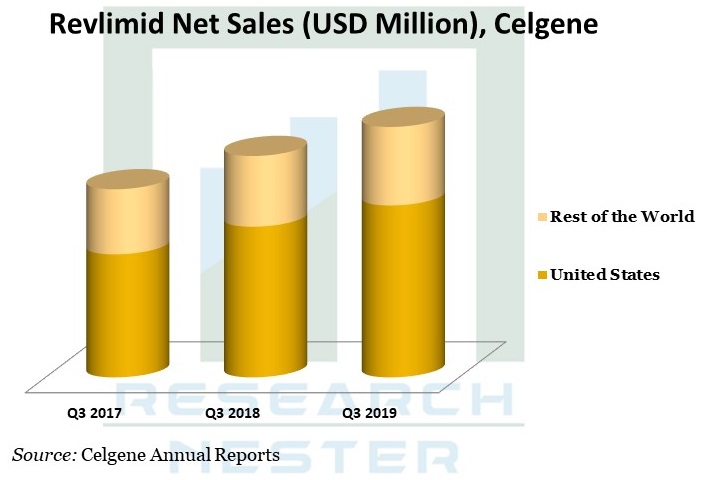 The treatment for multiple myeloma can be expensive which might not attract their adoption by all the patients. The equipment and products required for therapies such as chemotherapy and radiotherapy are highly expensive as well. Apart from this, the lesser number of people with severe multiple myeloma which display symptoms and require therapy is estimated to be another additional factor responsible for restricting the market growth in the coming years.

Our in-depth analysis of the multiple myeloma therapy market includes the following segments:

On the basis of regional analysis, the multiple myeloma therapy market is segmented into five major regions including North America, Europe, Asia Pacific, Latin America and Middle East & Africa region. The segment for North America is anticipated to hold the largest market share on account of high number of cases in the region, mainly in the United States. Further, the presence of leading companies involved in research and development as well as manufacturing of multiple myeloma therapies is another factor contributing towards the large share in the market. As the disease has a high chance of occurring in elderly people, the market in Asia Pacific region is estimated to observe substantial growth on the back of large geriatric population in the area, especially in countries such as China, India and Japan. 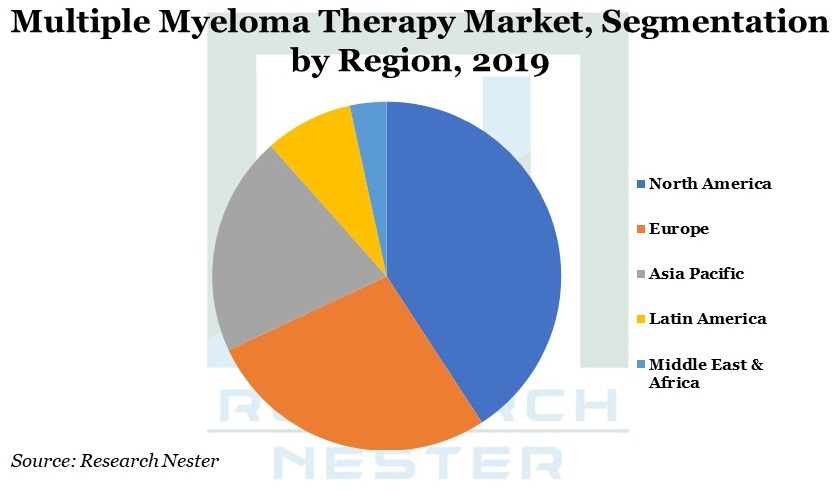 The multiple myeloma therapy market is further classified on the basis of region as follows:

What are the major factors driving the growth of the Multiple Myeloma Therapy market?

High revenues associated with multiple myeloma drugs and significant developments in existing and new therapies is anticipated to drive the market growth.

What would be the CAGR of Multiple Myeloma Therapy Market over the forecast period?

The market is anticipated to attain a significantly high over the forecast period, i.e. 2020-2028.

Which region is currently holding dominating share in the Multiple Myeloma Therapy market?

Which region will provide more business opportunities for growth of Multiple Myeloma Therapy market in future?

The market in Asia Pacific region is estimated to provide lucrative business opportunities on account of presence of target population, i.e., elderly population with multiple myeloma.

Who are the major players dominating in the Multiple Myeloma Therapy market?