The global motion control market reached a value of USD 12.92 billion in the year 2018 and is expected to garner a value of USD 18.10 billion by the end of 2027 by registering a CAGR of 3.82% throughout the forecast period, i.e. 2019-2027. Additionally, the market is anticipated gain an incremental $ opportunity of USD 0.52 billion in the year 2020 as compared to the previous year, along with an absolute $ opportunity of USD 4.69 billion.

The global motion control market is segmented by regions into North America, Latin America, Europe, Asia Pacific and Middle East and Africa. Among these regions, the market of Asia Pacific motion control held the largest market share of 40.02% in the year 2018 along with a value of USD 5.17 billion in the year 2018. The market in the region is further anticipated to cross a value of USD 7.19 billion by the end of 2027 by registering a CAGR of 3.74% during the forecast period.

On the other hand, the market in Europe is anticipated to gain a significant market share and is further expected to cross a value of USD 5.02 billion by the end of 2027 by registering a CAGR of 3.92% during the forecast period.  CLICK TO DOWNLOAD SAMPLE REPORT 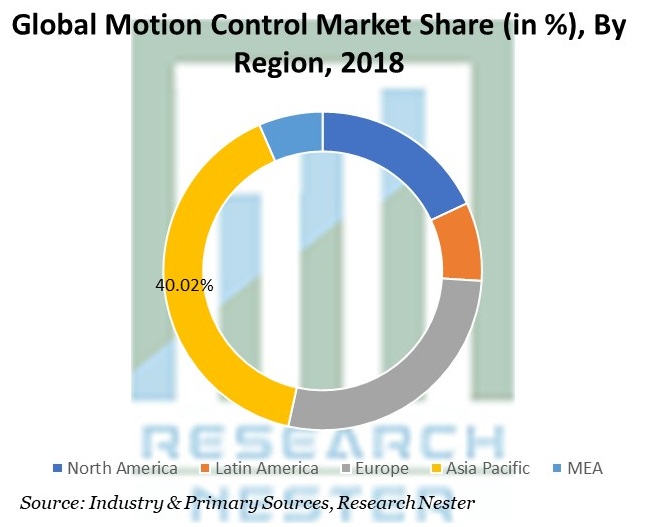 The global motion control market has been segmented by component into motor, motor drive, motion controllers, sensors & feedback devices and others. The motor segment, which held the largest market share of 34.91% in the year 2018, had a market value of USD 4.51 billion in the year 2018 and is expected to cross a value of USD 6.37 billion by the end of 2027 by registering a CAGR of 3.92% during the forecast period. Additionally, the segment is anticipated to achieve an incremental $ opportunity of USD 0.18 billion in the year 2020 as compared to the previous year. 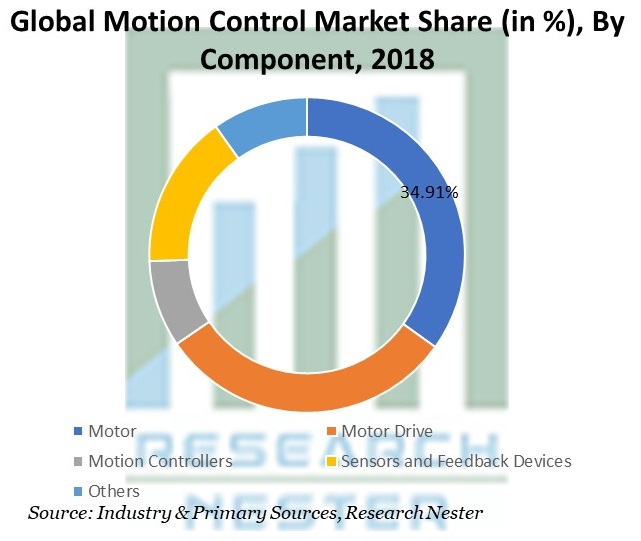 What are the major factors driving the growth of the Motion Control market?

Increasing adoption of industrial robots in end user industries is one of the major factors that is driving the growth of the market.

What would be the CAGR of Motion Control Market over the forecast period?

Which region is currently holding dominating share in the Motion Control market?

Which region will provide more business opportunities for growth of Motion Control market in future?

The market in Europe is anticipated to provide more business opportunities in the near future.

Who are the major players dominating in the Motion Control market?

What are the major segments in the global motion control market?

The market is majorly segmented by component, application, end user and by region.

What can be the significant growth opportunity for the component segment in the global motion control market?

The motor segment, which is a sub-segment of the component segment, held the largest market share of 34.91% in the year 2018, is anticipated to show significant growth opportunity.

High maintenance and replacement cost of motion control systems is one of the major factors anticipated to act as a barrier towards the growth of the global motion control market.