Montan wax is a normal wax extracted from lignites, which contains unadulterated wax (50-80%), tar (20-40%) and bitumen (10-20%). Due to its great physical and concoction properties, montan wax is a perfect substitute for the expensive Carnauba Wax. It is broadly utilized in production of every day substance, wax clean and carbon paper, electrical industry and numerous other businesses utilizing wax. Germans were the first to remove montan wax from lignite in 1897. The United States, Ukraine, the Czech Republic have had set up montan wax industry progressively in 1905. Wolfmeier et al. have announced that the yearly market interest for montan wax has achieved 25,000 tons in 2005. Originally, the applications of montan wax were studied in China and the usage became popular during 1980-1990s.

Montan wax consists of three parts: wax esters, long chain wax acids and long chain wax alcohols. It is used as a grease in the plastic business, as a defensive layer on natural products, as a retentive in the paper business, and as a covering specialist in the electrical business. Montan wax and carnauba wax share numerous properties. Nonetheless, the previous' shading is excessively dull and has constrained applications. At the point when shading isn't entirely required, montan wax can fill in as a modest substitute for carnauba wax. The carnauba wax contained in the shoe clean, floor wax, and vehicle wax can be supplanted by montan wax.

The global montan wax market is expected to showcase a significant CAGR of 5.2% during the forecasted period 2018-2027. Additionally, the global montan wax market is thriving on the back of rising use of montan in end use industries such as for coating agents and processing agents. In terms of regional platform, the demand for Montan Wax in the Western Europe region is anticipated to propel the growth of overall global montan wax market over the forecast period and expected to showcase highest CAGR over the estimated period. Factors such as increasing demand for thermosets and thermoplastic are expected to cause an increase in demand for montan wax. European region has the most prominent players and established players such as Völpker Spezialprodukte Gmbh, Romonta Gmbh, etc. North America region is expected to showcase steady growth in the near future due to high consumption rate of lignite production and is majorly dominated by high demand from U.S. Rising interest for montan wax and expansive scale lignite generation in this area are the real development factors in North America particularly in Canada and the U.S. Likewise, Latin America and the Middle East and Africa are expected to showcase a steady growth in the near future.

Our in-depth analysis segmented the global Montan Wax market in the following segments:

Global Montan Wax market is further classified on the basis of region as follows: 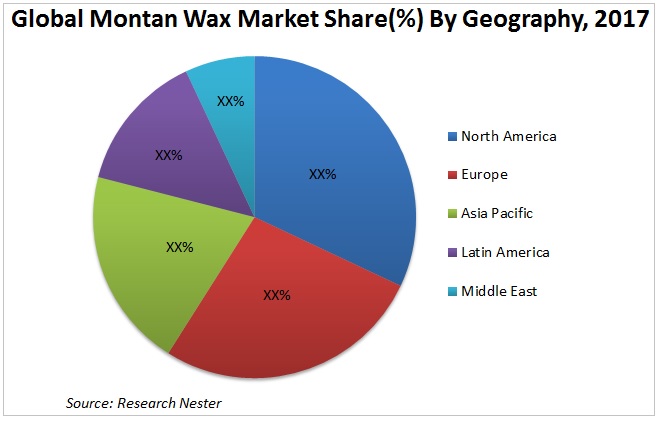 The global montan wax market is essentially determined by the development at end user industry. The phenomenal physiochemical properties of the montan wax and accessible at low cost when contrasted with different waxes, for example, carnauba wax, beeswax and so on further fortifies the utilization of montan wax. As indicated by FDA, the montan wax is viewed as appropriate and protected as an ointment in the generation of plastic sustenance holders. In nourishment application, montan wax helps in keeping up the freshness of the natural products. The developing interest from natural product sellers drives the worldwide montan wax showcase. The applications of montan wax in production of building plastics have proven to reduce the overall time required to develop and manufacture the plastic products. Such factors are expected to result in an increase in the demand for montan wax over the forecast period. Also, the physical and chemical properties of montan wax such enable it to be suitable for usage in various production related activities.

Rapid urbanization along with positive GDP figures of developed and developing nations such as U.S., China and others are projected to flourish the growth of Montan Wax market in various industries. In addition to this, favorable government initiatives and regulations regarding the benefits of individual safety while using thermoset products is anticipated to fuel the growth of montan wax market. Growing demand from fruit vendors is projected to propel the growth of montan wax market.

In contrast, availability of substitute product is expected to hinder the growth of montan wax market over the forecast period.