Modular construction has become a vital component capable of driving the construction industry’s productivity. The housing prices having hit the roof, owing to the growing demand for housing in the densely populated urban regions which has widened the scope for demand for modular construction that is being increasingly sought after, as a possible solution to the high construction costs and shortage in housing plaguing the industry over the last few decades.

The market size of global modular construction was valued at USD 105.50 billion in 2018 and is expected to cross USD 160 Billion by the end of 2025 by growing at a CAGR of 7.12% over the forecast period i.e. 2019-2025. Modular structures have diversified range of applications in many industries such as manufacturing, warehousing and office buildings. CLICK TO DOWNLOAD SAMPLE REPORT 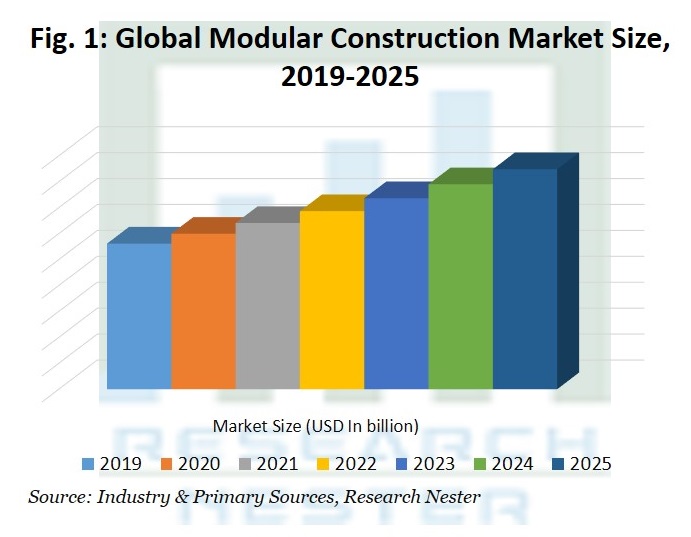 The global modular construction market is segmented region wise into 5 major regions comprising of North America, Europe, Asia Pacific, Latin America and Middle East & Africa. Among these regions, Asia Pacific is estimated to hold leading market on the back of rise in the per capita income and increasing urbanized population. The market in the region is projected to garner an estimated revenue of USD 84.34 billion by end of the forecast period. Additionally, the market in Asia Pacific region is expected to achieve a Y-o-Y growth rate of 8.09% by 2025 as compared to previous year. The North America market is expected to attain second highest market size by growing at a CAGR of 6.77% over the forecast period. The growth in the region can be attributed to rising infrastructure demand on account of migration in Canada and recovery in the infrastructure industry exhibiting growth after sub-prime crisis. 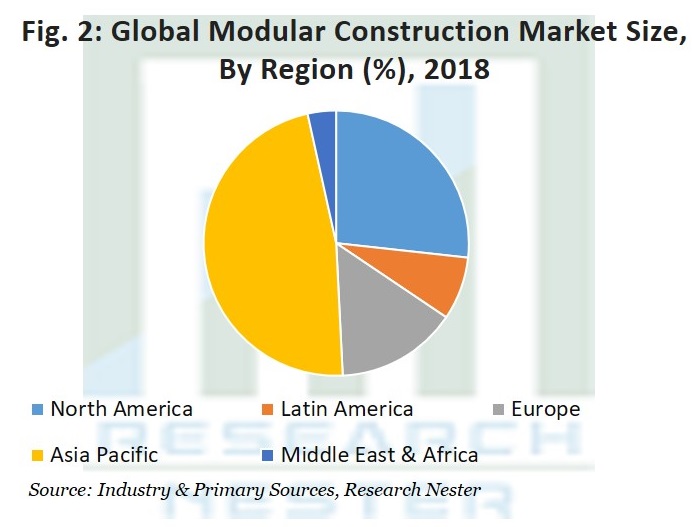 The global modular construction market is segmented on the lines of material into precast concrete, steel, wood, plastic and others, out of which the steel segment held the largest market size in 2018 and is estimated to grow significantly throughout the forecast period. On the other hand, higher demand of wooden modular structures on the advent of lower cost of manufacturing and decent designing exhibits the growth in wood modular construction segment across the globe.

The end-user segment is bifurcated into housing, commercial, healthcare, education and industrial. The initiatives taken by governments globally in the form of handing out various housing subsidies and conducting programs has supported the rapid growth of housing modular construction segment. Additionally, various programs backed by the UNESCO and UNICEF among other non-profitable organizations in association with the governing bodies are contributing towards significant development in education sector, especially in developing and underdeveloped countries.

Elevation in the demand for housing solutions in developing and developed countries is highly prevalent. Countries such as United Kingdom, Germany, France and United States are increasingly executing several programs to revamp the housing infrastructure and have adopted various advanced and upgraded housing solutions through the modular construction.

Additionally, the inclination in demand of the cost efficient and speedy construction combined with high infrastructure growth among the developing countries such as India and China are significantly contributing towards the growth of the market.

Apart from that, various companies and startups are investing and expanding their portfolio considerably into the industry offering cost efficient modular designs and solutions to supplement the growth in the infrastructure sector. This is expected to propel the demand for modular construction over the forecast period.

Various recorded incidences of damage related to modular structures in Australia, New Zealand, China and India are strengthening the notion of their shorter life span. Furthermore, the lack of awareness among the general population, especially in the developing countries such as India, Bangladesh, Malaysia, Indonesia and Vietnam among other nations is estimated to negatively affect the growth of modular construction market over the forecast period across the globe.

WillScot Corporation, a specialty rental services provider of innovative modular space and portable storage solutions across North America had completed its acquisition of Modular Space Holdings, Inc. for approximately $1.2 billion which has helped the Company immensely, as revenues have been on the rise since then in modular spacing units. The acquisition of ModSpace gave WillScot the power to manage over 160,000 modular space and portable storage units, serving an even broader customer base from over 120 locations across the United States, Canada and Mexico.

Additionally, few players are increasingly adopting innovative ways to establish themselves in the fragmented and competitive market through introduction of new housing solutions and by partnering with other players in the industry that includes acquisitions and mergers, thereby increasing their presence in the global modular construction market.