In November, 2019, BAE Systems was awarded funding by US Army to create an advanced radar jamming technology.  The company’s research and development team will design technology to integrate adaptive radio frequency jamming and sensing capabilities into one system.

A radar is an electronic device that uses radio waves for the determination of angle, velocity and direction of objects. It consists of a transmitter that produces electromagnetic waves in the form of radio waves or micro waves. Apart from this, a radar comprises of a transmitting antenna, a receiving antenna with a receiver and a processor to regulate properties of the object. A military radar system is used to detect vehicles, aircrafts and missiles. 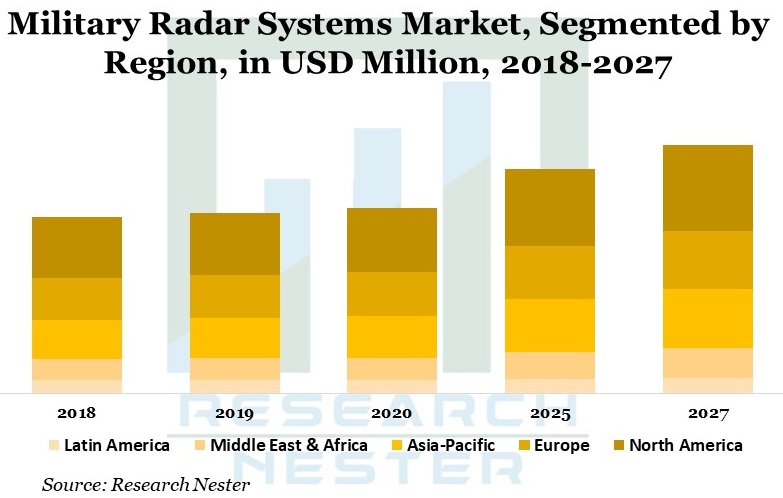 Based on platform, the market is segmented into air-based, ground-based, naval-based and space-based. Among these, the largest share in the market was occupied by the ground-based platform segment in the year 2018 and the highest growth rate of 4.64% over the forecast period is anticipated to be observed by this segment as well. Radar waves of ground-based systems are usually reflected from the surface of the ground. Radar energy with lower frequencies can penetrate into the ground and be reflected from buried objects. This can be used for probing the sub-surface soil in order to detect underground tunnels and utility pipes and cables. On account of these factors, the segment for ground-based platform is predicted to grow in the next few years.

On the basis of range, the market is segmented into long, medium, short and very short range, out of which, the long range segment is estimated to attain the largest market value of USD 7,214.44 million in 2027. Long range military radars are radar systems with the ability to detect targets from very long ranges, typically hundreds to thousands of kilometers. They use very long wave lengths with special propagation properties. The numerous advantages of long range military radars is resulting in this significant growth. On the other hand, the segment for very short range is anticipated to grow at the highest rate with a CAGR of 4.87% over the forecast period. Very short range military radar is easy to integrate on existing and future host platforms as a result of their reduced size, weight and power. They are designed for detection and tracking of airborne targets, including a wide variety of low RCS and low flying targets such as fighter aircraft, ultra-lights and UAVs. The high growth of this segment can be accounted on the basis of these factors. 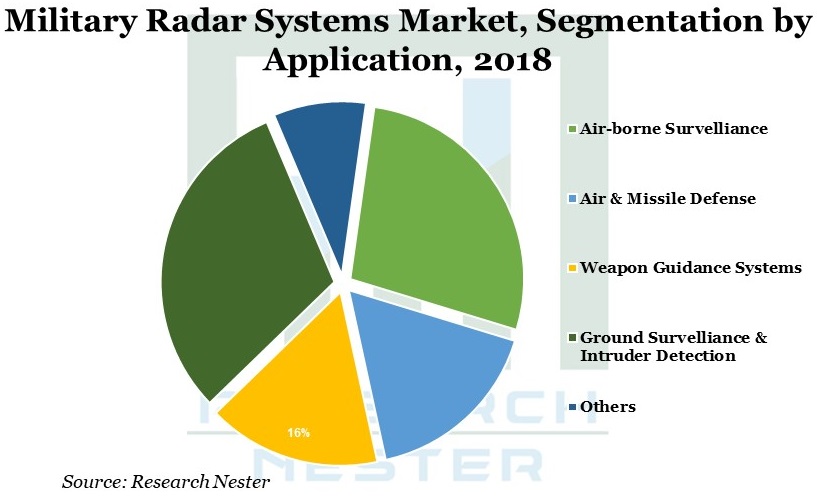 On the basis of band, the market is segmented into VHF & UHF band, L, S & C band, X-band and Ku, K & Ka band. By the end of the forecast period, i.e., 2027, the segment for X-band is anticipated to attain the largest market value of USD 6,996.10 million and grow by the highest CAGR of 4.76% during the forecast period. The wide use of X-bands for various military purposes is a major factor leading to the growth of this segment. Military satellite communications have typically focused on X-band operations. The major applications include short range tracking, missile guidance, mapping, marine radar and others.

Advanced technologies have a direct impact on the effectiveness of force, as a result of which, the defense budgets are increasing. This leads to a strong emphasis on enhancing capabilities across radar, EW, communications and other military systems. This is predicted to become a major growth driving factor for the military radar systems market. The growing GDP of developing countries and initiatives to improve the border security further leads to an increase in use of military radar systems. Additionally, the modernization of warfare has resulted in the emergence of advanced weaponry, thereby enhancing the radar capabilities of militaries as well. The increasing use of UAVs, advanced ballistic missiles and electronic warfare systems is another responsible factor for the enhancement of radar capabilities of the military. Technological advancements in military radar systems provide critical abilities to armed forces such as improved range, detection, identification and integration with other sensors along with the adaptability to new missions, platforms and environments.

The development of data processing algorithms which can distinguish between moving targets from the background objects is the major challenge faced by the radar industry. From the point of view of an orbiting satellite, the identification of such targets from space becomes a difficult task. Moreover, the introduction of stealth technology to make an object’s appearance blend into the background poses another challenge to the military radar systems as they prevent the detection and identification of objects through changing their aircraft.

Some of the affluent industry leaders in the military radar systems market are Lockheed Martin Corporation, Northrop Grumman Corporation, Thales Group, Leonardo S.p.A., Saab AB, Elbit Systems Ltd., BAE Systems, L3Harris Technologies, Inc., Raytheon Company, IAI and ASELSAN. Moreover, other key and niche players are working towards bringing improved and efficient technologies for bringing better radar systems in the market along with investing in the development of better military radar systems in order to gain a competitive edge in the market.