The global ground surveillance radar (GSR) systems market is estimated to garner a large amount of revenue by growing at a CAGR of ~7% over the forecast period, i.e., 2022 – 2031. The growth of the market can be attributed primarily to the rising adoption of GSR systems in army and marines for monitoring military installations, borders and refineries. Along with this, growing usage of GSR in civilian applications such as anti-collision systems for trains and highway safety systems for vehicles is projected to offer profitable opportunities to the market in the forthcoming years. Furthermore, increasing territorial conflicts and geopolitical instabilities in the Asia Pacific and Middle East regions, and high emphasis of militaries to replace legacy systems with radar ones are also expected to drive market growth in the near future. For instance, as of July 2020, China alone had about 15 territorial disputes with its neighbors on land and sea, including Taiwan, Philippines, Indonesia, Vietnam, Japan and South Korea. 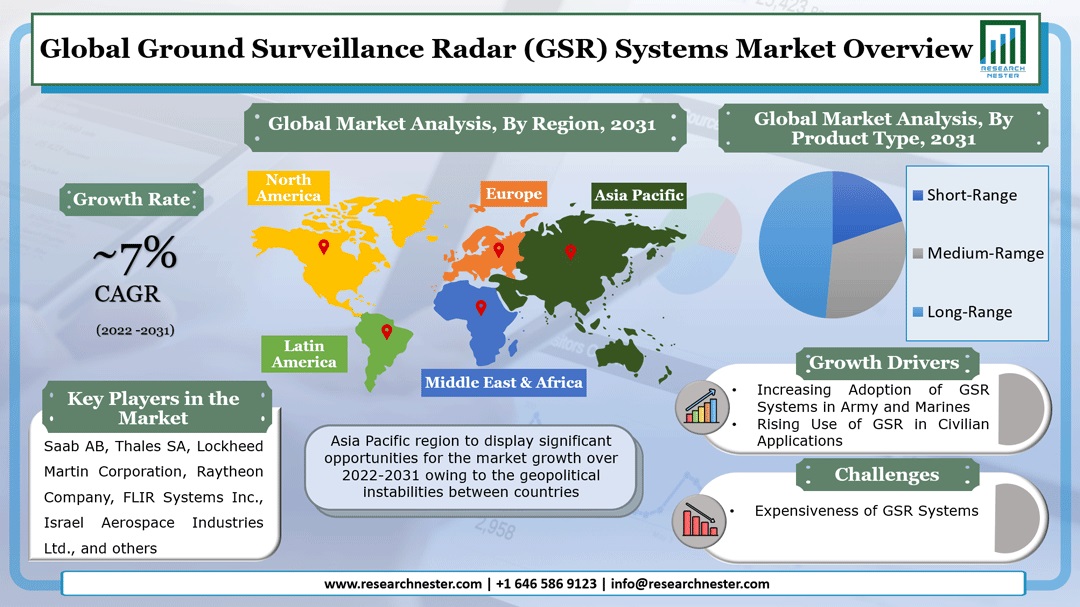 The market is segmented by application into home security, aerospace & defense, critical infrastructure, and others, out of which, the aerospace & defense segment is anticipated to hold the largest share in the global ground surveillance radar (GSR) systems market. This can be accounted to the rising emphasis of militaries on automation and miniaturization of security systems. Apart from this, growing investments in the aerospace & defense sector for technological advancements in the field of border security is also predicted to boost the growth of the market segment in the future. Additionally, on the basis of product type, the long-range segment is assessed to acquire the largest share during the forecast period owing to the increasing demand for long-range radar security systems for air surveillance systems, air mapping systems and weapon control systems. CLICK TO DOWNLOAD SAMPLE REPORT

Regionally, the global ground surveillance radar (GSR) systems market is segmented into five major regions including North America, Europe, Asia Pacific, Latin America and the Middle East & Africa region. The market in Asia Pacific is estimated to witness noteworthy growth over the forecast period on the back of the growing investments in air missile systems and ballistic missiles. In addition, geopolitical instabilities between economies are also projected to fuel the market growth in the region in the coming years. Moreover, the market in North America is expected to grab the largest share during the forecast period owing to the high military spending, and strong footprint of major market players in the region. In 2020, the military spending in the United States accounted for a value of more than USD 750 billion, up from USD 720 billion in 2019 and USD 700 billion in 2018, respectively. 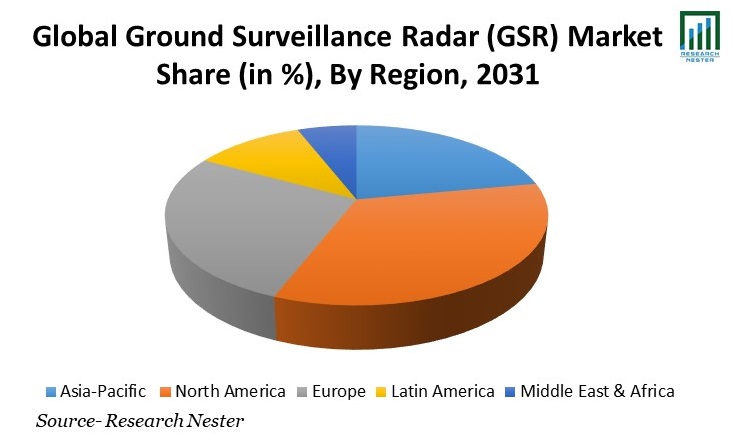 The global ground surveillance radar (GSR) systems market is further classified on the basis of region as follows:

What are the major factors driving the growth of the ground surveillance radar (GSR) systems market?

The major factors driving market growth owing to the rising adoption of GSR systems in army and marines, and growing usage of the GSR in civilian applications.

What would be the CAGR of ground surveillance radar (GSR) systems market over the forecast period?

Who are the major players dominating the ground surveillance radar (GSR) systems market?

What are the segments in the ground surveillance radar (GSR) systems market?

The market is segmented by product type, application, and by region.

Which segment captures the largest market size in the product type segment in the ground surveillance radar (GSR) systems market?

The long-range segment is anticipated to hold largest market size and is estimated grow at a notable CAGR over the forecast period and display significant growth opportunities.

High development cost of GSR systems is estimated to hamper the market growth.

Asia Pacific will provide more business opportunities for market growth owing to the growing investments in air missile systems and ballistic missiles in the region.