The global migraine nasal spray market is estimated to garner a notable CAGR over the forecast period of 2022-2031. The market growth can be attributed to growing prevalence of migraine, backed by the increased stress, depression, sleep deprivation, and anxiety prevalent amongst the population. In fact, migraine is the third most common disease, and approximately 1 billion people suffer from migraine worldwide. Furthermore, scientists suggest that humans are facing extreme weather changes, which can aggravate their health, making diseases, such as, migraine a common phenomenon. According to the World Meteorological Organisation, [R1] the decade 2011-2020 was the warmest on record, and the year 2020 is among the three warmest years globally. The increasing adulteration in food, hormonal misbalance, and longer screen time are also major reasons behind the growing number of migraine patients. Scientists have also found that migraine is more pervasive in women owing to hormonal changes, as 8 out of 10 people with migraine are women. As the number of patients with migraine is increasing exponentially, people are seeking an efficient remedy to eradicate the excruciating pain, which is expected to expand the global migraine nasal spray market. 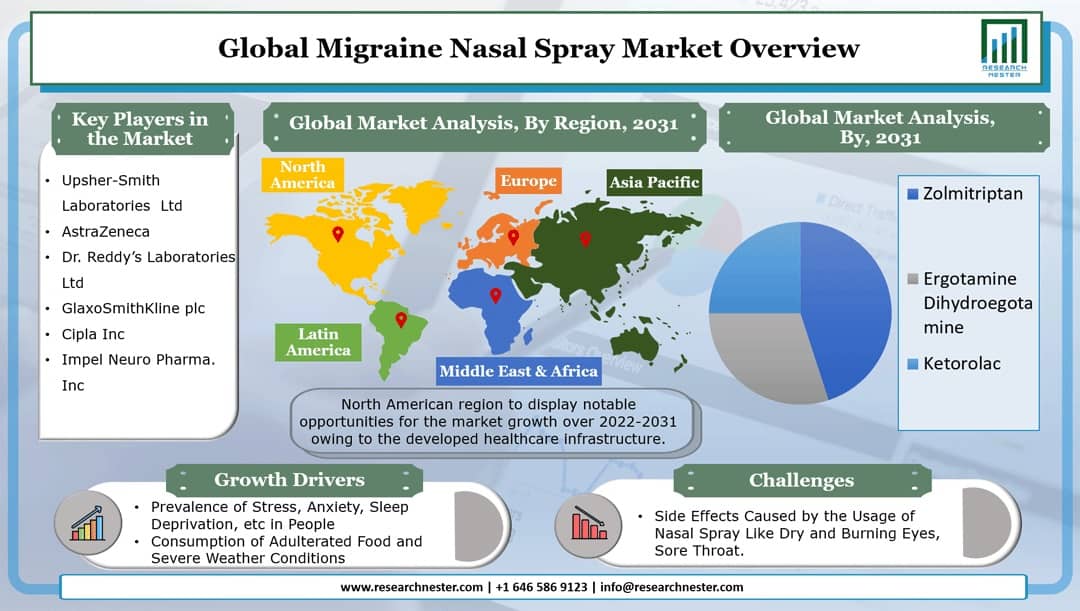 The global migraine nasal spray market is segmented by drug type into ergotamine dihydroergotamine, ketorolac, and zolmitriptan, out of which the zolmitriptan segment is anticipated to hold the largest share in the market over the forecast period on account of the low cost and higher efficiency of the drug. Also, the manufacturers of zolmitriptan have tried to nullify the side effects caused by the usage of migraine nasal spray making the product popular amongst people.

According to the statistics by the World Health Organization, the global per capita healthcare expenditure amounted to USD 1,064.741 in the year 2017. The worldwide healthcare expenditure per person grew from USD 864.313 in 2008 to USD 1,110.841 in 2018, where the U.S. is the top country that amounted to healthcare expenditure of USD 10, 623.85 per capita in 2018. As of 2018, the domestic general government healthcare spending in the U.S. was USD 5355.79, which grew from USD 3515.82 in 2008. These are some of the factors responsible for market growth over the past few years. Moreover, as per the projections by the Centres for Medicare & Medicaid Services (CMS), the estimated average annual percent change related to National Health Expenditures (NHE) in the U.S. was 5.2% in 2020 as compared to 2019 (4.5%). Furthermore, the National Health Expenditures are projected to reach USD 6,192.5 Billion in 2028, where the per capita expenditure is estimated to touch USD 17,611 in the same year. These are notable indicators that are anticipated to create lucrative business opportunities in upcoming years.

Regionally, the global migraine nasal spray market is segmented into five major regions including North America, Europe, Asia Pacific, Latin America, and the Middle East & Africa region. The market in the North America region witnessed modest growth over the forecast period on the back of increasing cases of migraine, raising awareness, and developing health care infrastructure. According to the report published in U.S. National Library for Medicine, migraine continues to be an important public health problem prevalent among 15.9% of all adults in the year 2018. Moreover, around 40% of US adults with migraine were unemployed in the same year. Hence, the governments in developed nations are addressing the disadvantages of migraines and making people aware of remedies, such as, migraine nasal spray, which is estimated to boost the market growth.

The market in the Asia Pacific region is expected to expand significantly over the forecast period. Highly populated countries such as India, China, and others, are estimated to offer a large consumer base for migraine nasal sprays, owing to the increasing cases of migraine in the region. 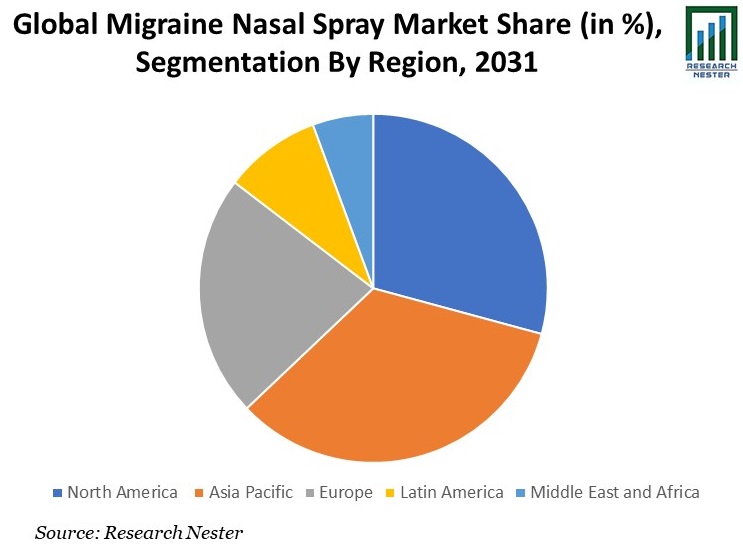 The global migraine nasal spray market is further classified on the basis of region as follows:

What are the major factors driving the growth of the migraine nasal spray market?

The exponentially increasing number of migraine patients worldwide is the leading cause of the widening demand for migraine nasal sprays.

What would be the CAGR of migraine nasal spray market over the forecast period?

What are the challenges affecting the migraine nasal spray market growth?

People often experience side effects such as unusual taste in the mouth, dizziness, and dry eyes. These adverse effects are estimated to hamper the market growth.

Which region will provide more business opportunities for growth of migraine nasal spray market in future?

North America region is estimated to provide a good business opportunity for the market on account of good healthcare infrastructure and rising awareness among people.

Who are the major players dominating the migraine nasal spray market?

The company profiles are selected based on the revenues generated from the product segment, the geographical presence of the company, which determines the revenue-generating capacity as well as the new products being launched into the market by the company.

What are the segments in the migraine nasal spray market?

The market is segmented by drug type, distribution channel, dosage, and by region.

Which sub-segment captures the largest market size in the drug type segment in the migraine nasal spray market?

The zolmitriptan segment is anticipated to hold the largest market size in value and is estimated to grow at a high CAGR over the forecast period.