The market for Cybersecurity in the Middle East & Africa is anticipated to witness a significant CAGR of 14.96% over the forecast period, i.e., 2019-2027. The market is estimated to attain a substantial market value of USD 48.93 billion during this period. Cybersecurity market in Middle East is predicted to contain the larger share than the market in Africa. This can be attributed to the rising technical advancements in the region. Based on countries, the markets in Israel and Saudi Arabia are predicted to hold leading shares in the market. 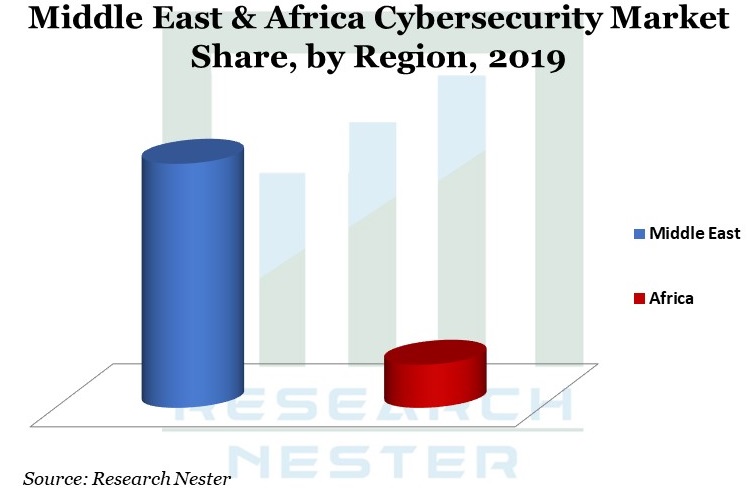 On the basis of component, the market is segmented into solutions and services, out of which, the segment for solutions is predicted to hold a slightly higher share in the market as compared with the services segment. The solutions segment is projected to grow at a higher CAGR of 15.65% during the forecast period. This can be attributed to the increasing cyber attacks. Cyber attacks such as malware, ransomware, DDoS attack, APTs, Domain Name System(DNS) injections and trojan, backdoor attack and target infected devices belonging to various enterprises which in turn has resulted in surging demand for solutions for cybersecurity in the market.

Based on connectivity, the market is segmented into IoT devices, PCs, mobile/network, connected TV, wearables and connected car, out of which, the segment for PCs is anticipated to hold the leading share in the market as it observed a share of 55.7% in 2018. The PCs segment is predicted to attain a market value of about USD 21.2 billion by end of 2027. However, the segment for IoT devices is predicted to grow at the highest rate over the forecast period on account of rising demand for IoT devices in the coming years. The expansion of Internet of Things (IoT) devices in the market has enhanced the application of network connectivity and web based applications used by the consumers in the Middle Eastern countries. Moreover, increasing penetration of IoT devices in the market further attracts challenges associated with cyber attacks by affecting the privacy of the end user and thereby, increasing demand for various security measures by the end-users. CLICK TO DOWNLOAD SAMPLE REPORT 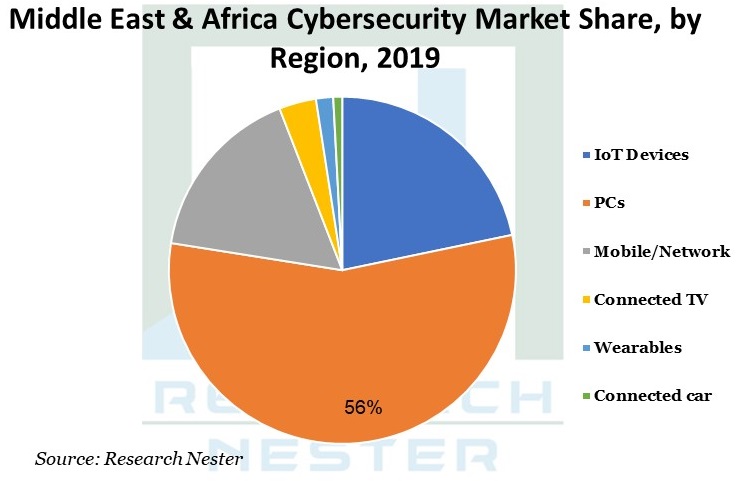 The security segment is further sub-segmented into network, endpoint, data, web & email and vulnerability & security management. Based on this, the segment for network is predicted to lead with a 36% share in the market in 2018 which is anticipated to grow further on account of increasing incidences of online attacks, mitigation of the losses resulting in public awareness across all the sectors. The segment for data is projected to grow at the highest CAGR of 17.76% over the forecast period.

On the basis of end user, the market is segmented into government, BFSI, energy & utilities, transportation, ICT and others, out of which, the BFSI segment is anticipated to hold the largest share in the market during the forecast period. This can be attributed to the proliferation of smart devices, growing adoption of digital analytics and digital payment platforms among organizations in the BFSI sector. The segment is estimated to grow on account of growing demand for robust security and digital privacy system in financial and banking institutes. In addition to this, adoption of internet banking, online application and cloud is driving the need for cyber security. Moreover, the segment for ICT is estimated to grow at the highest CAGR out of all segments during the given period. 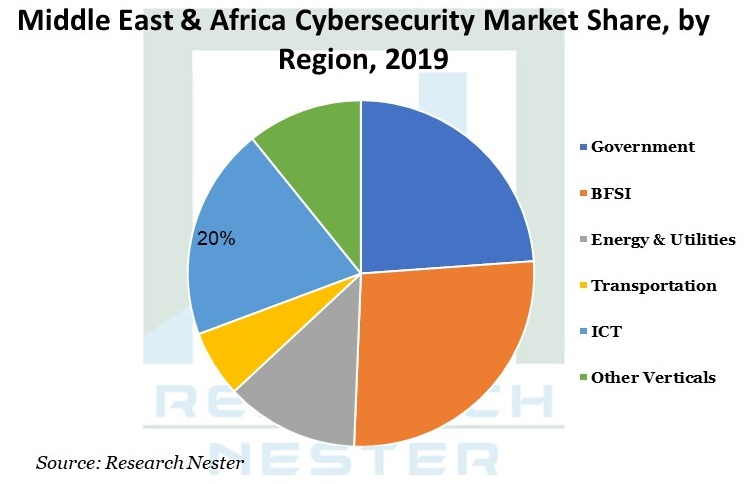 Rising adoption of mobiles, use of social media platforms and cloud based platforms results in increasing consumer concerns about the protection of private information and data. According to a study conducted by Norton Cyber-Crime, more than 1.5 million people are victims of cybercrime in Africa. Further, it was estimated that 80% of personal computers are infected with viruses and malicious software. This in turn is further predicted to drive the cybersecurity market in Middle East and Africa.

Moreover the growing concerns about reducing IT security risks, increasing incidences of enterprise targeted cyber-attacks and threats and penetration of smart offices in multinational corporations and digitization projects in the Middle East and Africa regions is driving the growth of cyber security market in order to prevent the enterprises from cyber attacks and cyber criminals.

Middle East and Africa lacks cybersecurity legislation which has a negative impact on business of cybersecurity companies. It does not have effective anti-spam and cybercrime laws and regulations to ensure safe use of the internet for carrying out online transactions. Further, the lack of security personnel is another one of the major restraints of cyber security market. The increasing skill gap among the employees is predicted to negatively impact the countries’ digitization transformational plans and hamper the security of critical assets. Moreover, hackers are becoming better at disguising their attacks which might lead to increasing incidences of data breaches, theft, loss and cyber attacks across the region.

What are the major factors driving the growth of the middle east and africa cybersecurity market?

Increasing adoption of phones, PCs and other devices which result in rising concerns about protection of private information and data are factors driving the market growth.

What would be the CAGR of middle east and africa cybersecurity market over the forecast period?

Which region will provide more business opportunities for growth of middle east and africa cybersecurity market in future?

Cybersecurity market in Middle East is predicted to contain the larger share than the market in Africa. This can be attributed to the rising technical advancements in the region.

Who are the major players dominating the middle east and africa cybersecurity market?