The global methanol market garnered a revenue of USD 29007.9 Million in the year 2020 and is further expected to reach USD 55110.5 Million by the end of 2030 by growing with a CAGR of 5.2% during the forecast period, i.e., 2021-2030. The growth of the market can be attributed to the growing demand for methanol from end user industries, followed by the surge in demand for methanol-based fuel. Methanol is known to have varied industrial applications, ranging from dyes to biodiesel, and explosives to medicines. Moreover, for the presence of numerous favorable properties of methanol, it can be converted into various kinds of chemicals, one of them being formaldehyde dimethyl ether. In the paint industry, methanol is used to manufacture inks, resins, adhesives, and dyes. It is also used to manufacture plastics, and various press textiles. In the pharmaceutical industry, methanol is used widely as ingredients for manufacturing vitamins, hormones, cholesterol, and streptomycin. Besides this, the production of biodiesel requires methanol through a trans-esterification reaction. A derivative of methanol, known as dimethyl ether, is an alternative to diesel and is blended with liquefied petroleum gas (LPG) for home heating and cooking. According to the Alternative Fuels Data Center (AFDC) of the U.S. Dept. of Energy, in the 1990s, methanol was marketed as an alternative fuel for compatible vehicles. Moreover, in the U.S., nearly 6 Million gasoline gallon equivalents of 100% methanol and blends of 85% methanol and 15% gasoline were used as an alternative fuel in vehicles annually. 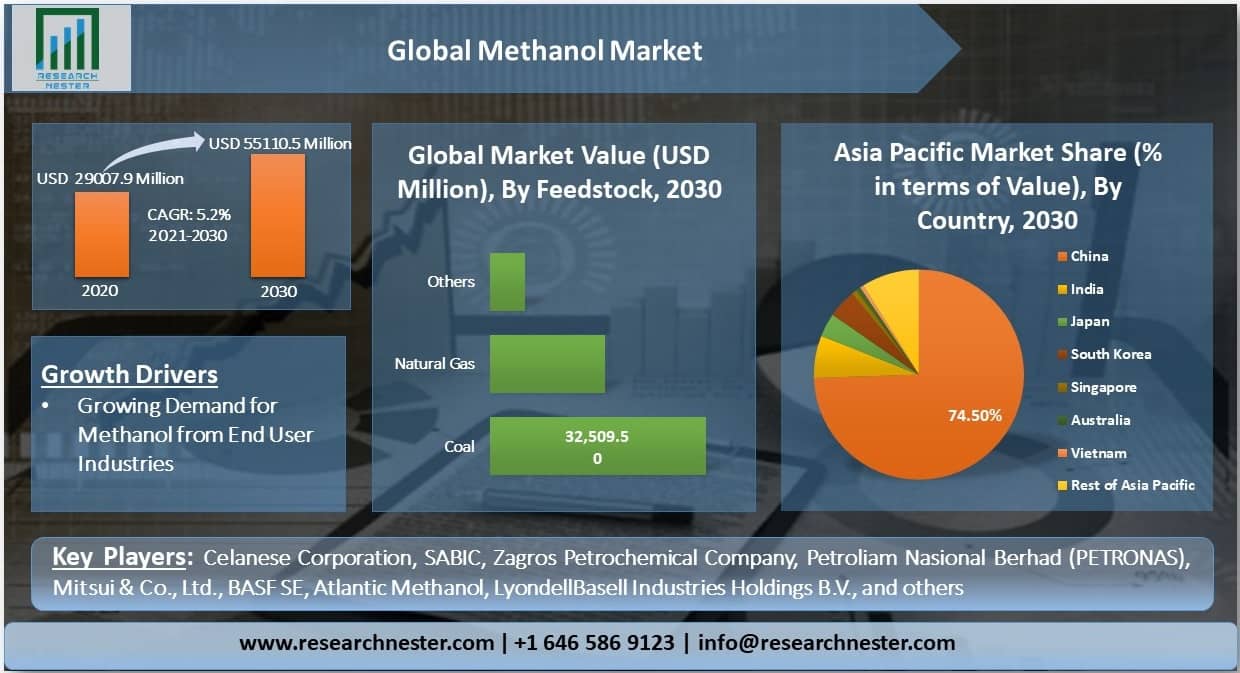 The one other area where methanol is used widely is in the petrochemicals industry. The production of petrochemicals over the past few years has grown massively, backed by the increasing demand for petrochemical products amongst the end users. Essential polymers, such as high-density polyethylene (HDPE), low-density polyethylene (LDPE), and polypropylene (PP), are produced from ethylene, propylene, and butene. These three chemicals are produced from methanol by a conversion process known as methanol to olefins (MTO). Apart from this, the market is anticipated to grow on account of the increasing production of methanol around the globe. According to the statistics by the Methanol Institute, there are over 90 methanol plants around the globe and the total combined production capacity of these plants was about 110 Million metric tons. CLICK TO DOWNLOAD SAMPLE REPORT 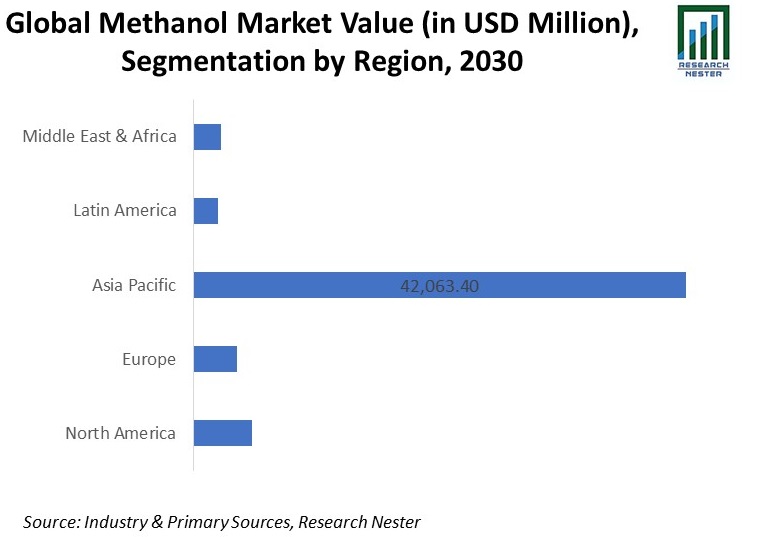 The global methanol market is segmented by feedstock into coal, natural gas, and others. Amongst these segments, the coal segment is anticipated to hold the largest market share and further attain a revenue of USD 32509.5 Million by the end of 2030, up from a revenue of USD 19017.2 Million in 2020. The natural gas segment, on the other hand, is anticipated to hold the second leading stance and further grow with a CAGR of 7% during the forecast period. The rise in demand for natural gas worldwide for different end use applications, is one of the major factors anticipated to drive the growth of the segment in the coming years. According to the statistics by the U.S. Energy Information Administration (EIA), total consumption of natural gas in the United States increased from 24086797 MMcf in the year 2010 to 31014345 MMcf in the year 2019. 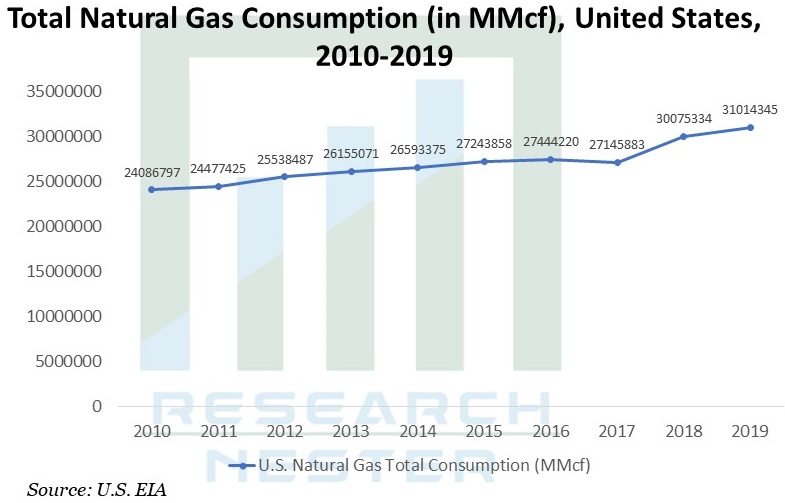 1) What are the major factors driving the growth of the methanol market?

Ans: The rise in demand for methanol from the end user industries is one of the major factors anticipated to drive the growth of the global methanol market in the coming years.

2) What would be the CAGR of methanol market over the forecast period?

3) What are the challenges affecting the methanol market growth?

Ans: The availability of low-cost alternatives is one of the major factors estimated to hamper the market growth.

4) Which region will provide more business opportunities for growth of methanol market in future?

Ans: The market in North America is anticipated to hold the second leading stance in terms of market share and further display significant business opportunities in the near future.

5) Who are the major players dominating the methanol market?

7) What are the segments in the methanol market?

Ans: The market is segmented by feedstock, derivatives, application, end use industry, and by region.

8) Which segment captures the largest market size in feedstock segment in the methanol market?

Ans: The coal segment is anticipated to hold largest market size in value and is estimated to display significant growth opportunities.