· June 08, 2021: Cummins Inc. plans to fund production of hydrogen powered boat, invented by a research team in the Nederland.

The global merchant hydrogen market is estimated to garner a sizeable revenue by growing at a CAGR of ~8 % over the forecast period, i.e., 2022–2030. The growth of the market can be attributed to the increasing use of hydrogen as a clean fuel, along with other applications of hydrogen. The growing environmental awareness among people, combined with government initiatives to curb the ozone depletion is estimated to boost the market growth. Following the Paris Agreement session of 2019, where 189 countries joined the commitment to reduce carbon emission by 2030, governments of various nations are investing in the achievement of sustainable development goals. This is estimated to boost the market growth. 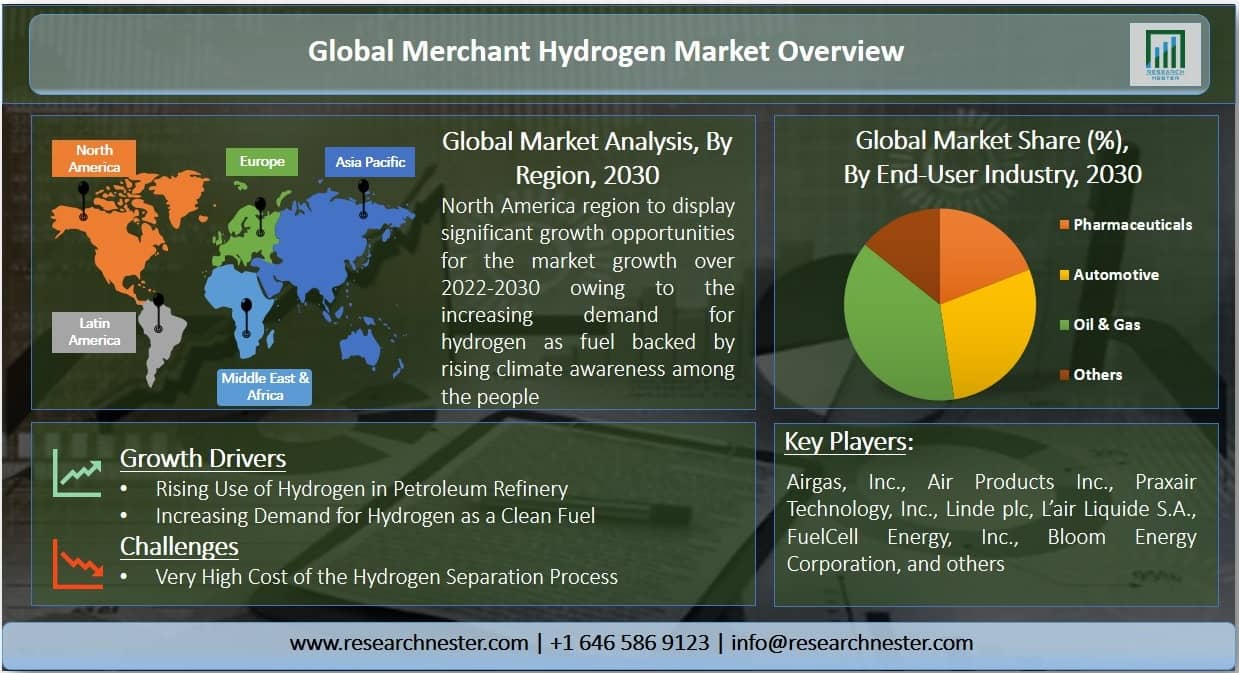 The global merchant hydrogen market is segmented by source into steam methane reforming, electrolysis, and other, out of which, the steam methane reforming segment is anticipated to hold the largest share in the market during the forecast period on account of abundant availability of methane. However, this is costly, and alternative economically feasible methods are being developed, which can impact the growth of the segment. On the basis of application, the market is segmented into jet fuel, gasoline, metallurgy, drugs & medicines, and others, out of which, the gasoline segment is estimated to garner the highest revenue by the end of 2030, owing to the increasing demand for hydrogen for refining petroleum and production of gasoline. The drugs & medicines segment is also foreseen to gain significant share during the forecast period, on the back of increasing cases of CVD and other heart diseases.

Regionally, the global merchant hydrogen market is segmented into five major regions including North America, Europe, Asia Pacific, Latin America and Middle East & Africa region. The market in North America region is estimated to garner largest share over the forecast period on the back of growing oil & gas industry in countries, such as, Canada, and the U.S. Canada is the 4th largest producer and exporter of oil, globally, and holds over 10% of the world’s share for oil wells. This is estimated to act as the major growth factor for the market. Furthermore, innovation in the healthcare sector, combined with the presence of major pharmaceutical companies in the region, is estimated to boost the market growth.

The market in the Europe region is estimated to witness highest CAGR over the forecast period on the back of high number of oil wells and oil refineries, along with growing international investment in the oil & gas industry in countries, such as, Russia, Poland, and Germany. Additionally, the rising automotive industry, along with the increasing environment awareness among manufacturers is estimated to raise the demand for hydrogen as a fuel. This is further projected to boost the market growth in the region. 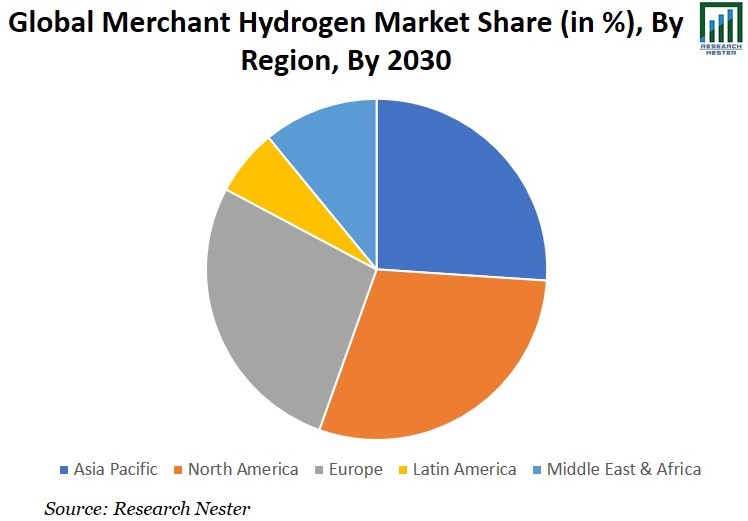 The global merchant hydrogen market is further classified on the basis of region as follows:

Our in-depth analysis of the global merchant hydrogen market includes the following segments:

1) What are the major factors driving the growth of the merchant hydrogen market?

Ans: Growing demand for clean fuel in vehicles and increasing use of hydrogen for petroleum refining are the major factors driving the market growth.

2) What would be the CAGR of merchant hydrogen market over the forecast period?

3) What are the challenges affecting the merchant hydrogen market growth?

Ans: Very high cost of obtaining hydrogen is one of the major factors estimated to hamper the market growth.

4) Which region will provide more business opportunities for growth of merchant hydrogen market in future?

Ans: The market in the North America will provide the highest growth opportunities for the market during the forecast period on the back of large number of oil refineries in the region.

5) Who are the major players dominating the merchant hydrogen market?

7) What are the segments in the global merchant hydrogen market?

Ans: The market is segmented by source, application, and end-user industry, and by region.

8) Which segment captures the largest market size in the application segment in the merchant hydrogen market?

Ans: The gasoline segment is anticipated to hold the largest market size over the forecast period owing to the increasing demand for hydrogen to refine petroleum.