The global medical device connectivity market is estimated to garner a revenue of USD 10897.22 Million by the end of 2031, by growing at a CAGR of 22.41% over the forecast period, i.e., 2022 – 2031. Moreover, in the year 2021, the market generated a revenue of USD 1513.25 Million. The growth of the market can be attributed to the growing concern for different types of chronic diseases worldwide and the surge in utilization of advanced medical devices for the treatment of these diseases. According to the statistics by the World Health Organization (WHO), more than 15 Million people between the age of 30 and 69 years, die from a noncommunicable disease (NCD). Hospitals and other healthcare service providers nowadays are increasingly utilizing advanced technology, such as electronic health records (EHRs) and connected medical devices so as to enhance their quality of service and to optimize their operational costs. The increasing trend of internet of medical things (IoMT), also known as internet of things (IoT) in healthcare, followed by the growing need amongst the healthcare service providers for safe, secure, and effective information transfer, backed by the growing incidences of cybercrime, and to help doctors as well as other healthcare workers with advanced analytical tools for diagnosis of their patients, are some of the additional factors anticipated to drive the growth of the market in the coming years. 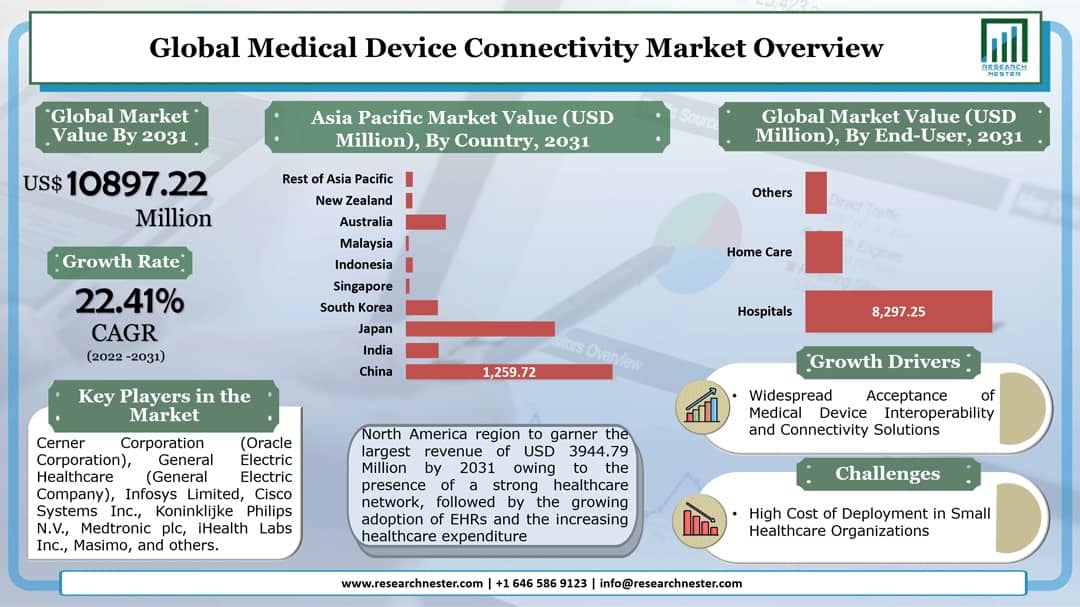 On the other hand, the rising initiatives by the healthcare regulatory bodies for global digital health transformation, and the surge in adoption of telehealth services, backed by the restrictions set by the regulatory bodies due to the COVID-19 pandemic, are some of the additional factors anticipated to boost the market growth during the forecast period. The WHO, in its statistical report titled “Global Strategy on Digital Health 2020-2025” stated four strategic objectives that are intended to provide guidance and coordination to healthcare providers for digital health transformation. The four strategic objectives include: promote global collaboration and advance the transfer knowledge on digital health, advance the implementation of national digital health strategies, strengthen governance for digital health at global, regional, and national levels, and advocate people-centred health systems that are enabled by digital health. 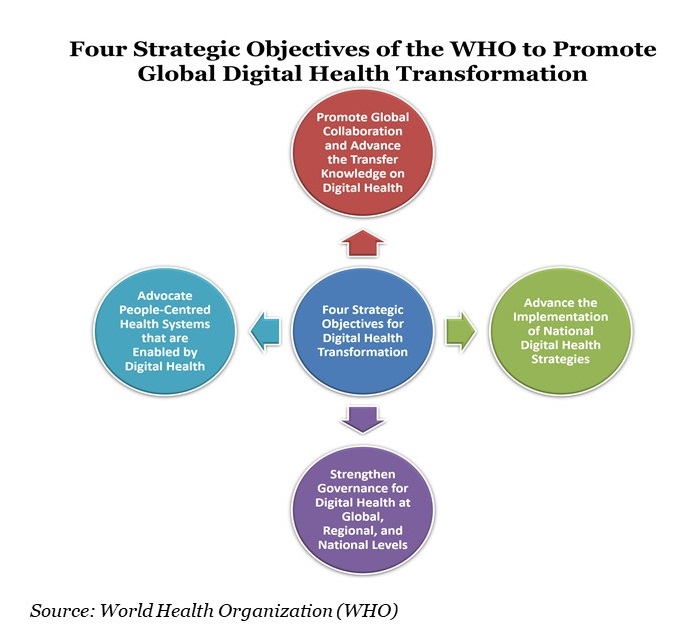 Regionally, the global medical device connectivity market is segmented into five major regions including North America, Europe, Asia Pacific, Latin America and Middle East & Africa region. The market in North America region is anticipated to garner the largest revenue of USD 3944.79 Million by the end of 2031, up from a revenue of USD 534.18 Million in the year 2021. The growth of the market in the region can primarily be attributed to the presence of a strong healthcare network, especially in the United States, followed by the growing awareness for the benefits associated with the adoption of digital transformation in health amongst the healthcare providers. In addition to this, the surge in adoption of EHRs and the increasing healthcare expenditure in the region are also expected to boost the market growth in the region. According to the Centers for Disease Control and Prevention (CDC), in the year 2019, 89.9% of office-based physicians used any type of electronic medical record (EMR) or electronic health record (EHR) system. Moreover, 72.3% of office-based physicians used a certified EMR/HER system. On the other hand, according to the statistics by the World Bank, the current health expenditure in North America touched 16.322% of GDP in the year 2019, up from 14.727% of GDP in the year 2008.

1) What are the major factors driving the growth of the medical device connectivity market?

Ans: The widespread acceptance of medical device interoperability and connectivity solutions, and the rising demand for data analytics amongst healthcare service providers are anticipated to drive the growth of the market.

2) What would be the CAGR of medical device connectivity market over the forecast period?

3) What are the challenges affecting the medical device connectivity market growth?

Ans: The high cost of deployment in small healthcare organizations, and the concerns for cybersecurity are estimated to hamper the market growth.

4) Which region will provide more business opportunities for growth of medical device connectivity market in future?

Ans: The market in North America region is anticipated to garner the largest revenue of USD 3944.79 Million by the end of 2031 and provide more business opportunities in the future.

5) Who are the major players dominating the medical device connectivity market?

7) What are the segments in the medical device connectivity market?

Ans: The market is segmented by technology, end-user, and by region.

8) Which segment captures the largest market size in technology segment in the medical device connectivity market?

Ans: The wireless segment is anticipated to garner the largest revenue of USD 5193.23 Million by the end of 2031 and display significant growth opportunities.