Lower Carbon Cement Market Segmentation by Type of Product (Recycled Aggregates, Fly Ash Based, Slag Based, Limestone Based, and Others); by Application (Commercial, Residential, Industrial, and Others) – Global Demand Analysis & Opportunity Outlook 2030

The global lower carbon cement market is estimated to garner a sizeable revenue and grow at a CAGR of 8.5% over the forecast period, i.e., 2022 – 2030. The growth of the market can be primarily attributed to the need to combat climate changes, giving rise to the usage of sustainable products that cause less harm to the environment. Along with these, rapidly growing urbanization and increasing construction activities across the globe are projected to offer abundant growth opportunities to the market in the near future. According to the United Nations Conference on Trade and Development (UNCTAD), by 2019, the share of urban population in the world increased to 55.7, up from 51.1 percent in 2009. The rate was highest in developed regions, accounting for 80.5 percent of the population. Furthermore, government efforts to reduce carbon dioxide emissions across the globe, and rising development of net zero buildings are also expected to significantly drive market growth in the upcoming years. 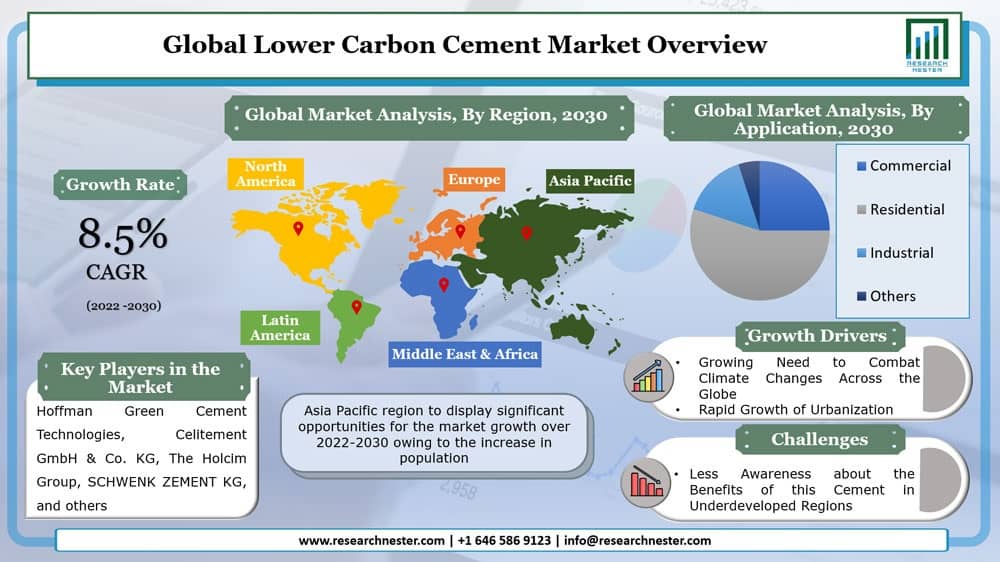 The market is segmented by type of product into recycled aggregates, fly ash based, slag based, limestone based, and others, out of which, the recycled aggregates segment is anticipated to hold the largest share in the global lower carbon cement market. This can be accounted to the rapidly growing urbanization which is elevating the use of recycled aggregate concrete for construction projects, landscaping and home improvements. Apart from this, this type of cement is highly reliable, safe to use, and conserves landfill space, which is also expected to boost the growth of the market segment in the years to come. Additionally, on the basis of application, the residential segment is predicted to acquire the largest share during the forecast period owing to the high economic growth in developed and developing regions, which is raising the need for infrastructural development. 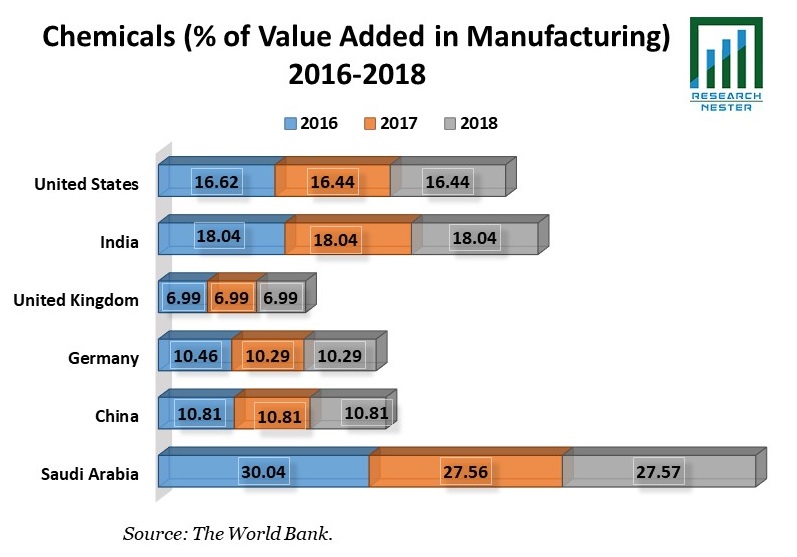 On the basis of geographical analysis, the global lower carbon cement market is segmented into five major regions including North America, Europe, Asia Pacific, Latin America and the Middle East & Africa region. The market in Asia Pacific is estimated to acquire the largest share and witness noteworthy growth over the forecast period on the back of the increasing population, leading to a mounting need for economic development in the region. As per the World Bank, in 2020, the population of South Asia was 1.857 billion, up from 1.836 billion and 1.814 billion in 2019 and 2018. 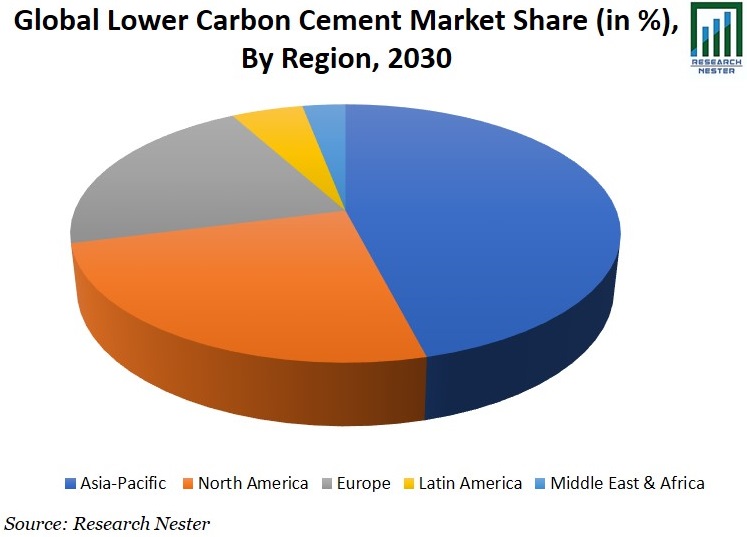 The global lower carbon cement market is further classified on the basis of region as follows:

By Type of Product

What are the major factors driving the growth of the lower carbon cement market?

The major factors driving market growth are rising need to combat climate changes across the globe, and rapid growth of urbanization.

What would be the CAGR of lower carbon cement market over the forecast period?

What are the challenges affecting the lower carbon cement market growth?

Low awareness about the benefits of this cement in underdeveloped regions is estimated to hamper the market growth.

Which region will provide more business opportunities for growth of lower carbon cement market in future?

Asia Pacific will provide more business opportunities for market growth owing to the increasing population, leading to a mounting need for economic development in the region.

Who are the major players dominating the lower carbon cement market?

The major players in the market are Hoffman Green Cement Technologies, Celitement GmbH & Co. KG, The Holcim Group, SCHWENK ZEMENT KG, and others.

What are the segments in the lower carbon cement market?

The market is segmented by type of product, application, and by region.

Which segment captures the largest market size in type of product segment in the lower carbon cement market?

The recycled aggregates segment is anticipated to hold largest market size and is estimated to grow at a notable CAGR over the forecast period and display significant growth opportunities.