The global lipase reagentmarket is estimated to garner a revenue of USD 1160 million by the end of 2031 by growing at a CAGR of ~7% over the forecast period, i.e., 2022 – 2031. Further, the market generated a revenue of USD 590million in the year 2021. The growth of the market can be attributed to the increasing number of patients who are suffering from different diseases that require lipase analysis.The lipase testing reagents act as indicators to study the presence of pancreas-related disorders and other gastric problems. The rise in widespread demand for lipase testingreagents on account of indigestion, acute and chronic pancreatic disorders, gastroesophageal reflux disease (GERD), and other intestinal disorders is expected to drive the market growth during the forecast period. The incidence of acute pancreatitis raised from 28per 100,000 population in 1999 to 36 per every 100,000 population in 2010. 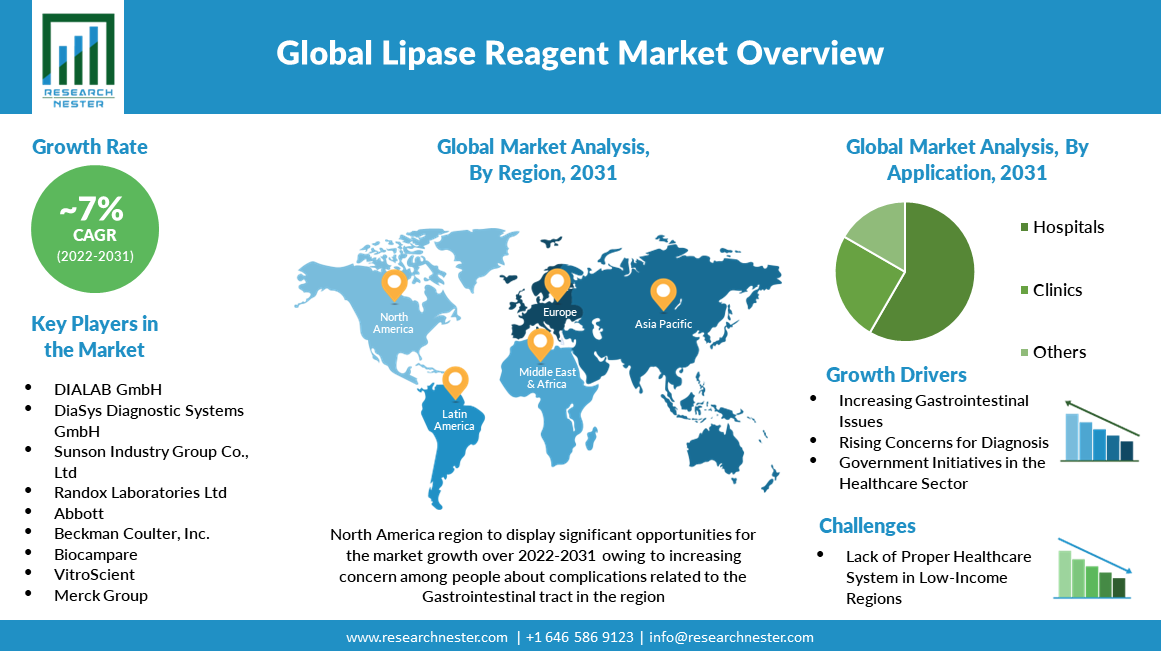 Other major factors contributing to the growth of the market include the increase in diseases like vitamin deficiency, dehydration, malnutrition, high gastric acids, and persistent diarrhea. As per the Centers for Disease Control and Prevention, the number of adults diagnosed with ulcers was about 14.8 million in 2018.

Besides, the demand for lipase testing reagents market is propelling as children with cystic fibrosis (CF) or Schwachman-Diamond Syndrome (SDS) diagnosis increase. Lipase levels are high in patients with cystic fibrosis. According to the World Gastroenterology Organization, out of 100%, 49% of females and 36.6% of males have the most common disorders like constipation, diarrhea, IBS, proctalgia fungax, and dyspepsia at rates of 11.7%, 4.7%, 4.1%, 5.9%, and 7.2% respectively.

The global lipase reagent market is segmented and analyzed for demand and supply by application intohospitals, clinics& others, out of which, the hospital segment is anticipated to hold the largest market size by the end of 2031. The market is estimated to grow on account of expanding healthcare sector and advancements in technology within the medical sector for diagnostics and therapeutics.As per estimations of the Organization for Economic Co-operation and Development (OECD), health expenditure raised by 5% from 8.8% GDP in 2019 to 9.7% GDP in 2020 across OECD countries.

According to the statistics by the World Health Organization, the global per capita healthcare expenditure amounted to USD 1,064.741 in the year 2017. The worldwide healthcare expenditure per person grew from USD 864.313 in 2008 to USD 1,110.841 in 2018, where the U.S. is the top country that amounted to healthcare expenditure of USD 10, 623.85 per capita in 2018. As of 2018, the domestic general government healthcare spending in the U.S. was USD 5,355.79, which grew from USD 3,515.82 in 2008. These are some of the factors responsible for market growth over the past few years. Moreover, as per the projections by the Centers for Medicare & Medicaid Services (CMS), the estimated average annual percent change related to National Health Expenditures (NHE) in the U.S. was 5.2% in 2020 as compared to 2019 (4.5%). Furthermore, National Health Expenditures are projected to reach USD 6,192.5 Billion in 2028, where the per capita expenditure is estimated to touch USD 17,611 in the same year. These are notable indicators that are anticipated to create lucrative business opportunities in upcoming years.

Regionally, the global lipase reagentmarket is studied into five major regions including North America, Europe, Asia Pacific, Latin America and Middle East & Africa region. Amongst these markets, the market in North America region is projected to hold the largest market share by the end of 2031on the back of increasing concern among people about complications related to the gastrointestinal tract. Among440 million non-cancer medical conditions, over22 million acute digestive conditions with 11 million gastroenteritis and 6 million indigestion cases are reported.

Besides, the North America region is having good infrastructure and more hospitals propelling the growth of theglobal lipase reagent market during the forecast period. According to the American Hospital Association,the total number of all hospitals in the North America region is 6,000 with staffed beds of 920,000 in 2022. Also, the regional government policies towards the public health care programs attribute to the growth of the market. 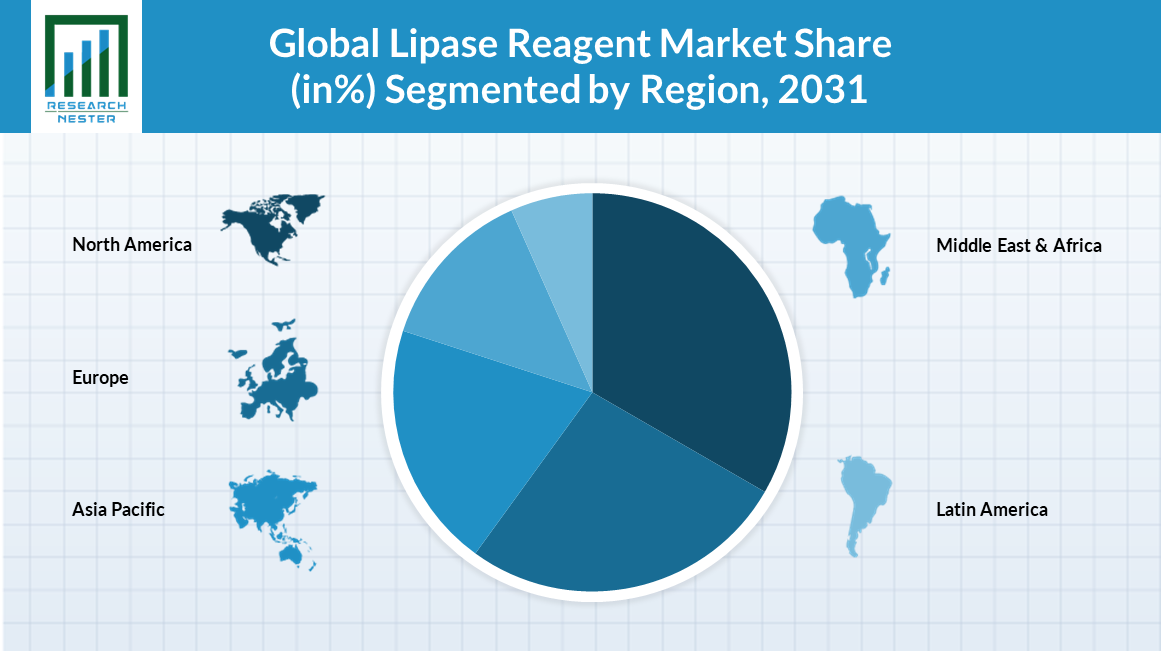 The global lipase reagentmarket is further classified on the basis of region as follows:

Our in-depth analysis of the global lipase reagentmarket includes the following segments:

What are the major factors driving the growth of the lipase reagent market?

Increasing gastrointestinal issues and rising concern for diagnosis are the major factors driving the growth of the lipase reagent market.

What would be the CAGR of lipase reagent market over the forecast period?

What are the challenges affecting the lipase reagent market growth?

Lack of a proper healthcare system in low-income regions and less awareness of the diagnosis and gastric issuesare the challenges affecting the market growth.

Which region will provide more business opportunities for growth of lipase reagent market in future?

Who are the major players dominating the lipase reagent market?

What are the segments in the lipase reagent market?

The market is segmented by type, application, indication, and by region.

Which segment captures the largest market size in application segment in the lipase reagent market?