·   August 27, 2020: Signify and the Nordic company EDZCOM, announced a collaboration for the introduction of Trulifi, which is a two-way wireless network providing connectivity via infrared and visible lights. The partnership is aimed at accelerating the adoption of LiFi in manufacturing industries.

The global Li-Fi (light fidelity) market is estimated to garner a sizeable revenue by growing at a CAGR of ~69% over the forecast period, i.e., 2022 – 2030. The growth of the market can be attributed to the growing need for high-speed data transfer, rising advent of internet of things (IoT), and increasing initiatives by government for energy management in the ICT sector. It is calculated that approximately 31 billion IoT units will be installed by the year 2025. In 2019, there were more than 600 IoT platforms existing around the world. Furthermore, Li-Fi is capable of offering several advantages over current Wi-Fi technologies such as low power consumption, faster data transmission, improved data security and minimal electromagnetic interference, which in turn is projected to boost the demand for light fidelity in the forthcoming years. In addition, growing implementation of smart city projects in emerging economies worldwide is expected to provide ample growth opportunities to the market in the near future. 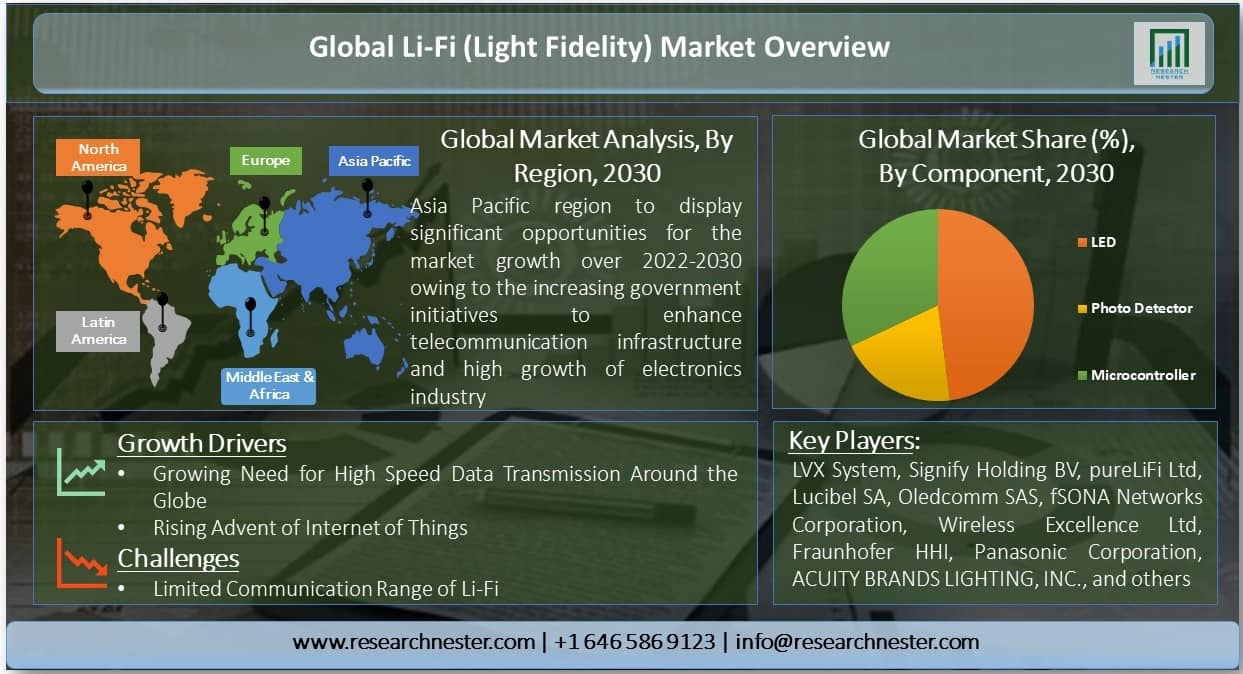 The market is segmented by component into LED, photo detector and microcontroller, out of which, the LED segment is anticipated to hold the largest share in the global Li-Fi (light fidelity) market on account of wide promotion of usage of LED by governments of various countries owing to its lower power consumption and zero harmful emissions. Additionally, on the basis of application, the indoor segment is assessed to observe notable growth over the forecast period, which can be credited to the growing accommodation in smart buildings, and increasing application of Li-Fi in location-based services, indoor lighting and wireless data communication. Along with this, growing number of collaborations among companies to offer unprecedented Li-Fi solutions in indoor spaces is also assessed to drive growth to this market segment in the future.

On the basis of geographical analysis, the global Li-Fi (light fidelity) market is segmented into five major regions including North America, Europe, Asia Pacific, Latin America and Middle East & Africa region. The market in the Asia Pacific region is estimated to witness noteworthy growth over the forecast period on the back of growing number of government initiatives to improve the telecommunication infrastructure, increasing manufacturing base and robust growth of electronics industry. For instance, the total electronics production in China increased from 10% in 2016 to about 14% by the end of 2017. In 2020, China alone produced 33% of electronic circuit components in the world. Moreover, the North America is expected to occupy the largest market share during the forecast period owing to the rising advancements in technologies such as big data, IoT and wireless sensor networks. Apart from this, rising penetration of smart phones and presence of prominent market players is also projected to boost the growth of the market in this region.

The global Li-Fi (light fidelity) market is further classified on the basis of region as follows:

What are the major factors driving the growth of the Li-Fi (light fidelity) market?

The major growth drivers for the market are increasing requirement for high-speed data transfer and growing emergence of IoT technology.

What would be the CAGR of Li-Fi (light fidelity) market over the forecast period?

What are the challenges affecting the Li-Fi (light fidelity) market growth?

Limited range of communication of Li-Fi is estimated to hamper the market growth.

Which region will provide more business opportunities for growth of Li-Fi (light fidelity) market in future?

Asia Pacific is estimated to provide more business opportunities to the market owing to the growing number of government initiatives to improve the telecommunication infrastructure in the region.

Who are the major players dominating the Li-Fi (light fidelity) market?

The major players in the market are LVX System, Signify Holding BV, pureLiFi Ltd, Lucibel SA, Oledcomm SAS, and others.

What are the segments in the Li-Fi (light fidelity) market?

The market is segmented by component, application, end user, and by region.

Which segment captures the largest market size in the component segment in the Li-Fi (light fidelity) market?

The LED segment is anticipated to hold largest market size and is estimated to grow at a notable CAGR over the forecast period and display significant growth opportunities.