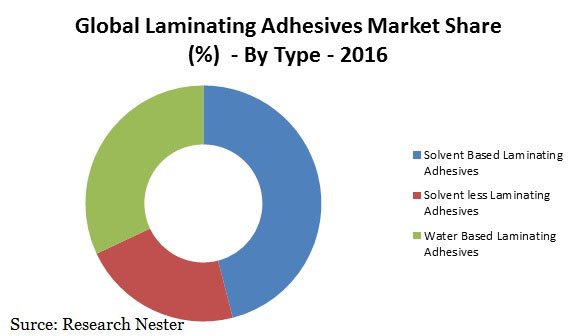 In terms of region, Asia-Pacific is anticipated to dominate the overall laminating adhesive market. In 2016, Asia-Pacific accounted for more than 43% market share and is expected to continue its dominance over the forecast period. This can be attributed to growth and expansion of automotive sector and packaged food industries in the Asian countries. China, Malaysia and India are expected to be the major countries witnessing the augmented demand for laminating adhesive during the forecast period.CLICK TO DOWNLOAD FREE SAMPLE

Our in-depth analysis segmented the global laminating adhesive market in the following segments:

Global laminating adhesive market is further classified on the basis of region as follows:

However, government regulations and increasing consumer inclination towards eco-friendly products is anticipated to limit the growth of the global laminating adhesives market.