Lab-grown meat, also known as cultured meat, is developed by the in-vitro cell culture of animal cells. The process forms a part of the tissue culture technology, which otherwise is also known as cellular agriculture. The major benefit of developing lab-grown meat is that meat can be availed without slaughtering of the animals. Lab-grown meats are known to have several prospective moral, environmental, health, cultural as well as economic considerations in comparison to the conventional meat. The industrial processing of lab-grown meat started since the year 2013. The production of lab-grown meat is completed in three stages, namely, by selecting the starter cells, followed by the treatment of the growth medium and ending with scaffolding of the lab-grown meat. 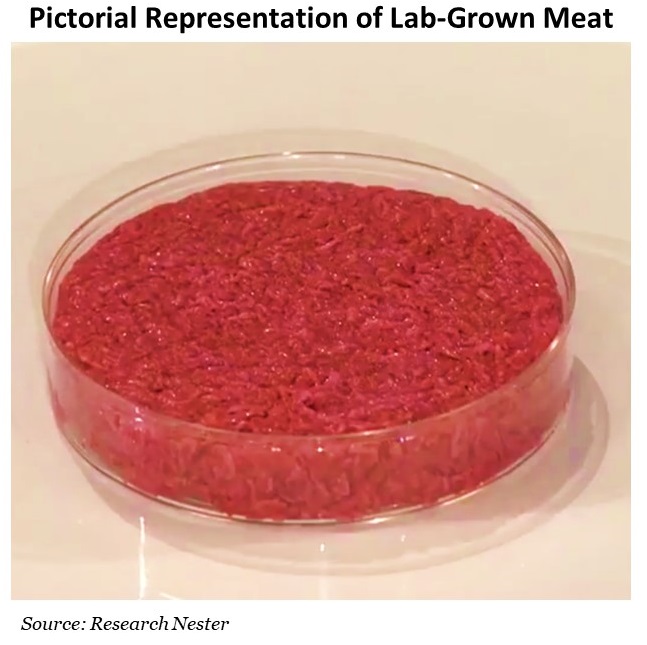 The global lab-grown meat market is thriving on the back of increasing demand for food products, backed by the growing population worldwide. There is a rising need amongst individuals from around the globe to increase the production of food products to avoid the short fall in the total stock of food products that is required for consumption by the society. Moreover, rising consumption of meat and meat products around the world, followed by the increasing trade on meat products between nations worldwide are some of the factors anticipated to promote the growth of the global lab-grown meat market. According to the statistics by the Food and Agricultural Organization (FAO) of the United Nations, meat exports around the world expanded by 6.8% to 36 million tonnes in the year 2019. The largest growth that was registered was for pig meat, followed by bovine and poultry meats.

The lab-grown meat market is anticipated to record a significant CAGR throughout the forecast period, i.e. 2020-2028. The market is segmented by meat type into poultry, beef, pork, duck, seafood and others. Out of these segments, the poultry segment is anticipated to hold the largest market share, backed by the increasing production and trade of poultry meat as compared to other meat products. According to the other statistics by the Food and Agricultural Organization (FAO) of the United Nations, production, import and export of poultry meat in the year 2019 constituted to 133575 thousand tonnes, 12518 thousand tonnes and 13880 thousand tonnes respectively. Moreover, poultry meat has several benefits associated with it as compared to other meat product types, such as, it is rich in omega-3 fatty acids and it do not contain trans fats. Presence of trans fats in meat is known to cause coronary heart diseases in humans. CLICK TO DOWNLOAD SAMPLE REPORT 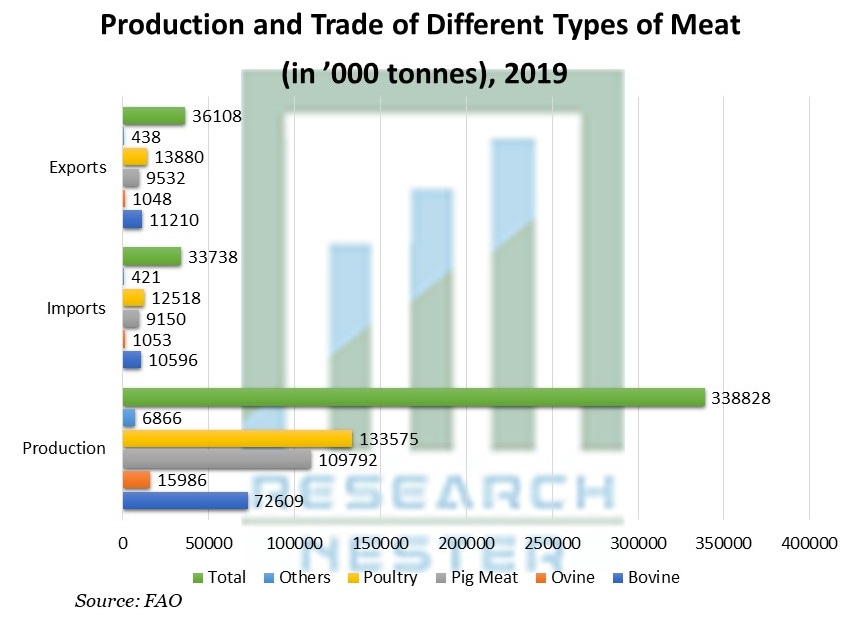 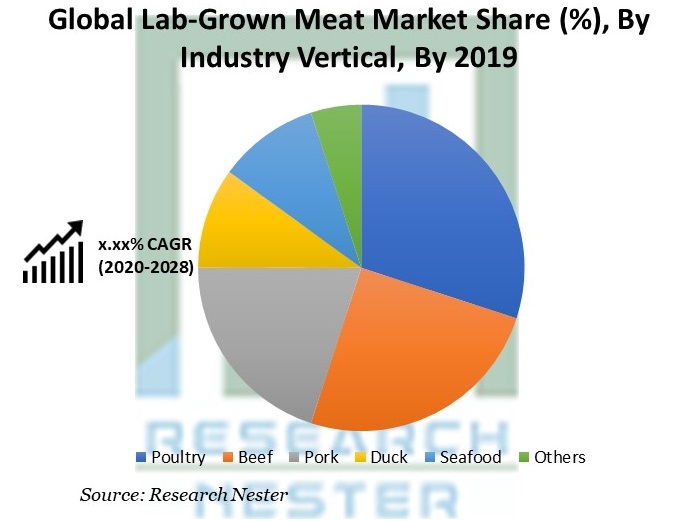 Growing Concern for the Slaughtering of Animals

The processing and commercial production of meat products from conventional sources possesses significant environmental costs. Increasing concern for such a cause has raised the need for the adoption of lab-grown meat, which are known to significantly reduce the environmental costs upon full-scale commercial production. Moreover, upon the adoption of lab-grown meats, it is also anticipated that the resource-intensive character of conventional meat production, too would be addressed. Lab-grown meat is produced and developed in a laboratory, under certain specific environment. The cell culture process provides clean meat and only requires sustenance of cultured cells rather than an entire organism.

Backed by the increasing population worldwide, there is an increasing need to develop alternative food sources that can help balance the total food stock available for consumption. With the advancements in tissue culture technology over the years, scientists and researchers have been able to develop lab-grown meat. Moreover, the manufacturing process of lab-grown meat provides the manufacturer greater control on manufacturing the exact quantity that is required for consumption in the end use applications. As a result, lab grown meat also significantly addresses the concern for reducing food wastage, as well as the environmental costs associated for procuring meat from conventional sources. Such factors are anticipated to drive the growth of the global lab-grown meat market.

Our in-depth analysis of the global lab-grown meat market includes the following segments:

The global lab-grown meat market is further classified on the basis of region as follows:

N95 Mask Market Segmentation by Mask type (With Breathing Valve and Without Breathing Valve); and by Application (Industrial, Individual, Hospitals and Clinics, and Others) – Global Demand Analysis and Opportunity Outlook 2021-2029