The growing need for connectivity in today’s modern world is fostering the demand for connected devices. The technological advancement in IoT devices is one of the major factors which are driving the popularity of these devices among the industries. The businesses in U.S., Russia, China and India are adopting new business models and solutions to generate more revenue by focusing towards their core operations. The O&G and other companies are aggressively adopting IoT solutions to improve the company operations. 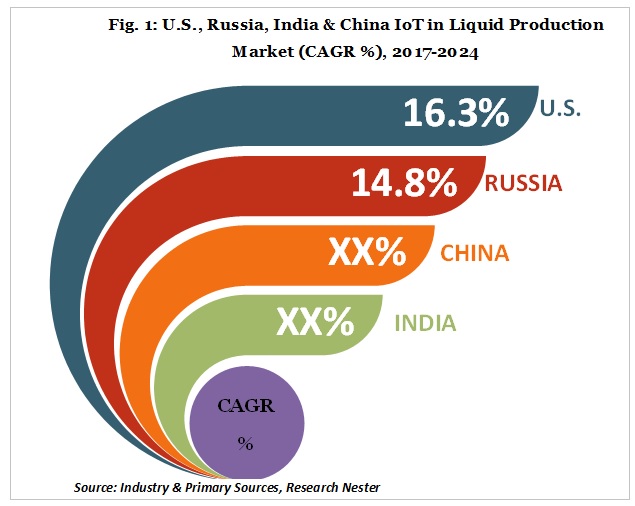 The IoT in liquid production market is segmented by applications, by component and by software and platform type.

The IoT in liquid production market is segmented by application into food & beverages industry, oil & gas industry, chemical industry and others. 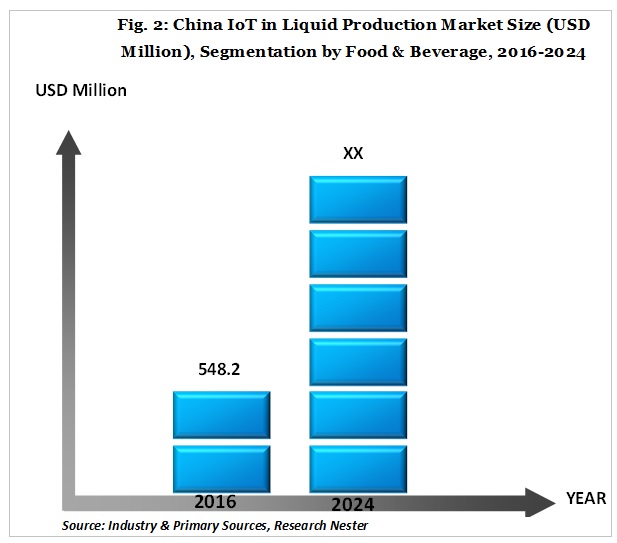 Oil & Gas Industry: Russia is projected to capture highest market share as compared to the U.S. by the end of 2024. The estimated growth rate of India is 3.6x as and 2.6x in China over the forecast period.

Chemical Industry: U.S. is expected to dominate chemical industry by holding highest market valuation in terms of revenue as compared to Russia by 2024. Further, China is expected to contribute a market share of 40.2%, closely followed by India by the end of 2024.

The U.S. dominated the overall U.S., Russia, India and China IoT in liquid production market with the maximum market revenue of USD 5,159.0 Million in 2016 and is expected to hold its dominant stance by holding a significant market share over the forecast period i.e. 2017-2024. The second largest market to hold highest market share in 2016 was China, followed by Russia and India. India IoT in liquid production market in overall type segment is anticipated to grow with moderate CAGR of around 18.9% over the forecast period.

IoT in industries offer a number of advantages such as higher yields and improved energy efficiency to reduce complete operating costs over the long term. Adoption of IoT in Oil & Gas industries has allowed them to act strongly and quickly in real-time as safety and regulatory issues arise. Apart from this, IoT has also made predictive maintenance and reactive remediation more convenient at remote sites combined with other industrial advantages such as predictive & proactive maintenance, real-time monitoring, remote diagnosis and asset/resource optimization. Further, favorable government and FDI policies are expected to work totally in favor of the IoT evolution in liquid production industries in the near future.

Complexity and high cost related to the development of internet of things (IoT) platform is creating a major challenge for the industry. Further, growing rate of cyber-crimes and rising concerns regarding security are expected to limit the growth of the IoT in liquid production market over the forecast period.

As a whole, other key players are also focusing on the technological advancement in IoT to supplement the expansion of liquid production market in U.S., Russia, India and China.