The global ionic liquid market is anticipated to attain a robust CAGR during the forecast period, i.e., 2021 – 2029. The key reason behind this growth is the utilization of ionic liquid in variety of industries, majorly as an industrial solvent, owing to its exceptional properties such as low combustibility and high thermal stability among others. Factors including the increasing demand for ionic liquids for performing extraction and separation processes, and the rising emphasis on formulating solvents on the basis of green chemistry principles are also projected to boost the growth of the market in the near future. As per our analysis, the renewable chemicals market size was calculated to be approximately USD 70 billion in 2018, growing up to more than USD 85 billion in 2020. 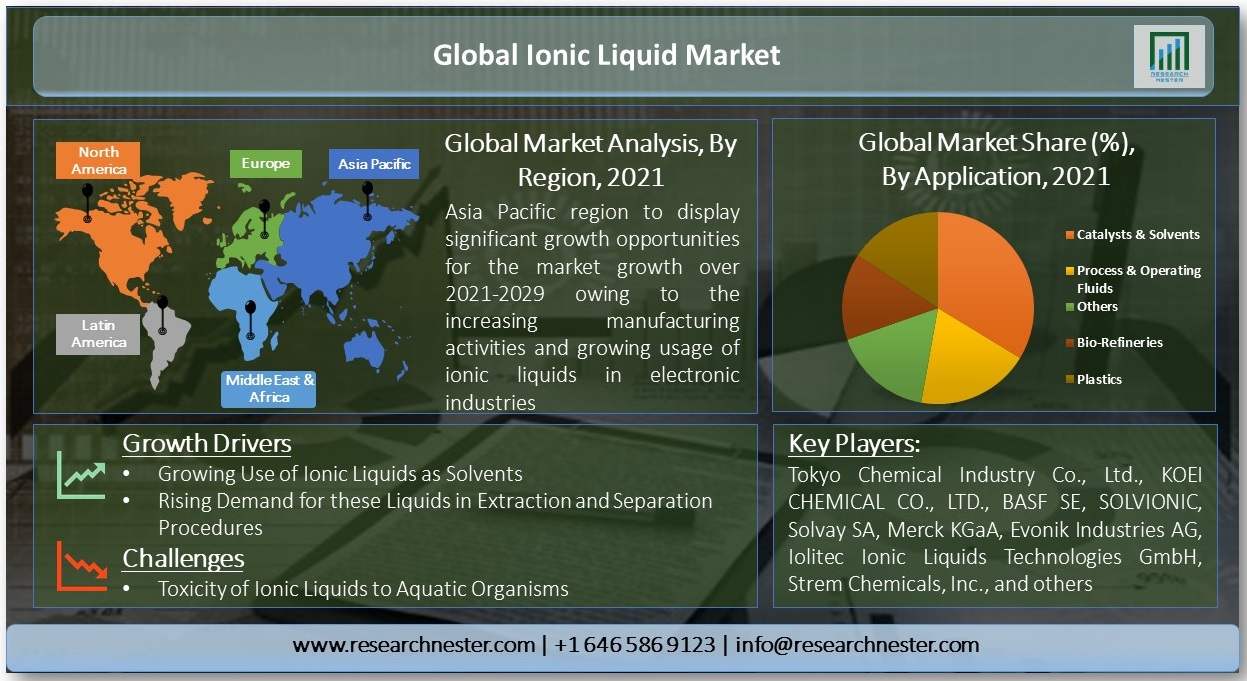 On the basis of application, the segment for catalysts & solvents is estimated to grab the largest market share in 2021 as a result of their characteristics such as high chemical stability and excellent solvation properties. Stringent government regulations to minimize the volatile organic compounds (VOC) emissions is also expected to drive the growth of this market segment. For instance, the discharge of VOCs to outdoor areas is restricted by EPA in the United States to prevent ozone formation that further leads to the creation of photochemical smog. CLICK TO DOWNLOAD SAMPLE REPORT

Based on the region-wise analysis, the ionic liquid market is segmented into five significant zones including North America, Latin America, Europe, Asia Pacific, and the Middle East & Africa. Among these regions, the market in the Asia Pacific is expected to hold the largest share in 2021 owing to the high consumption of ionic liquids in the electronic goods industry, and the rising demand for ionic liquids from nations with strong manufacturing throughput such as Japan, Korea, China and Taiwan. Various researches predict that China alone accounted for more than 28% of global manufacturing output in 2018. In addition, Asia Pacific is also one of the largest chemicals producing region in the world. On the other hand, the market in North America is also anticipated to hold a significant market share owing to the presence of leading industrial manufacturers in this region. Along with this, the presence of prominent mining companies, which are an extensive user of ionic liquids, is also evaluated to offer growth opportunities to the market in this region. 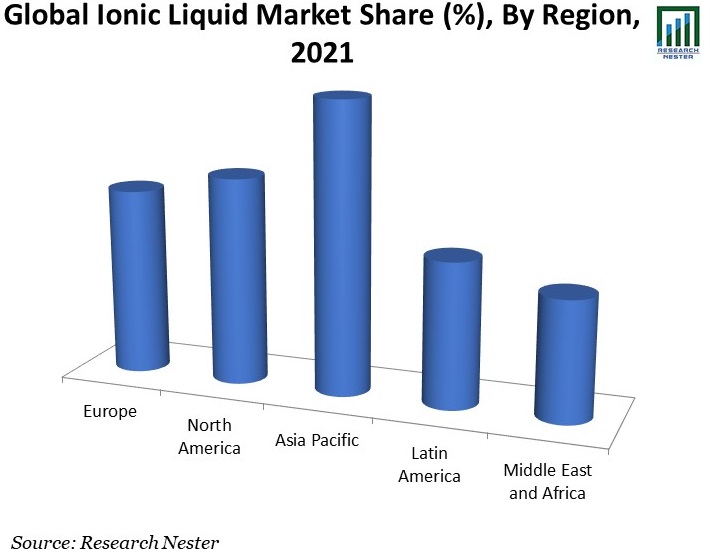 The market is further classified on the basis of regions as follows:

Our in-depth analysis of the global ionic liquid market includes the following segments:

What are the major factors driving the growth of the ionic liquid market?

Increasing usage of ionic liquid as an industrial solvent is the major factor driving the market growth.

What would be the CAGR of ionic liquid market over the forecast period?

Increasing usage of ionic liquid as an industrial solvent is the major factor driving the market growth.

Which region will provide more business opportunities for growth of ionic liquid market in future?

Asia Pacific region is anticipated to provide more business opportunities on the back of growing consumption of ionic liquids.

Who are the major players dominating the ionic liquid market?

What are the segments in the ionic liquid market?

The market is segmented by component type, application, and by region.

Which segment captures the largest market size in the application segment in the ionic liquid market?

The catalysts & solvents segment is anticipated to hold the largest market size and is estimated to grow at a notable CAGR over the forecast period and display significant growth opportunities.

Fluctuating prices of raw materials and aquatic toxicity of ionic liquids are the key reasons estimated to hamper market growth.