The global identity verification market is estimated to garner a revenue of USD 33189.19 Million by the end of 2030, by growing at a CAGR of 16.32% over the forecast period, i.e., 2021 – 2030. Moreover, in the year 2020, the market generated a revenue of USD 7632.60 Million. The growth of the market can be attributed to the growing number of fraudulent activities, such as identity theft & cyberattack worldwide, and the rising awareness amongst businesses as well as governmental institutions for the adoption of identity theft protection services to avoid such fraudulent activities. According to the statistics by the Consumer Sentinel Network of the Federal Trade Commission (FTC) of the United States, the total number of identity theft cases recorded in the United States in the year 2020 was 1387615 cases, registering the highest share of 29.39% amongst all other categories. Besides this, with the surge in internet use globally, and the rise in the number of users using online banking services, there is a growing need amongst individuals to safeguard their personal data, which also includes loads of financial information. The identity verification systems provide cyber security by helping businesses safeguard their customer’s personal data, such as names, addresses, email IDs, passwords, and others from cyber criminals and also help in fraud detection and prevention. Such factors are therefore anticipated to drive the growth of the global identity verification market in the coming years. 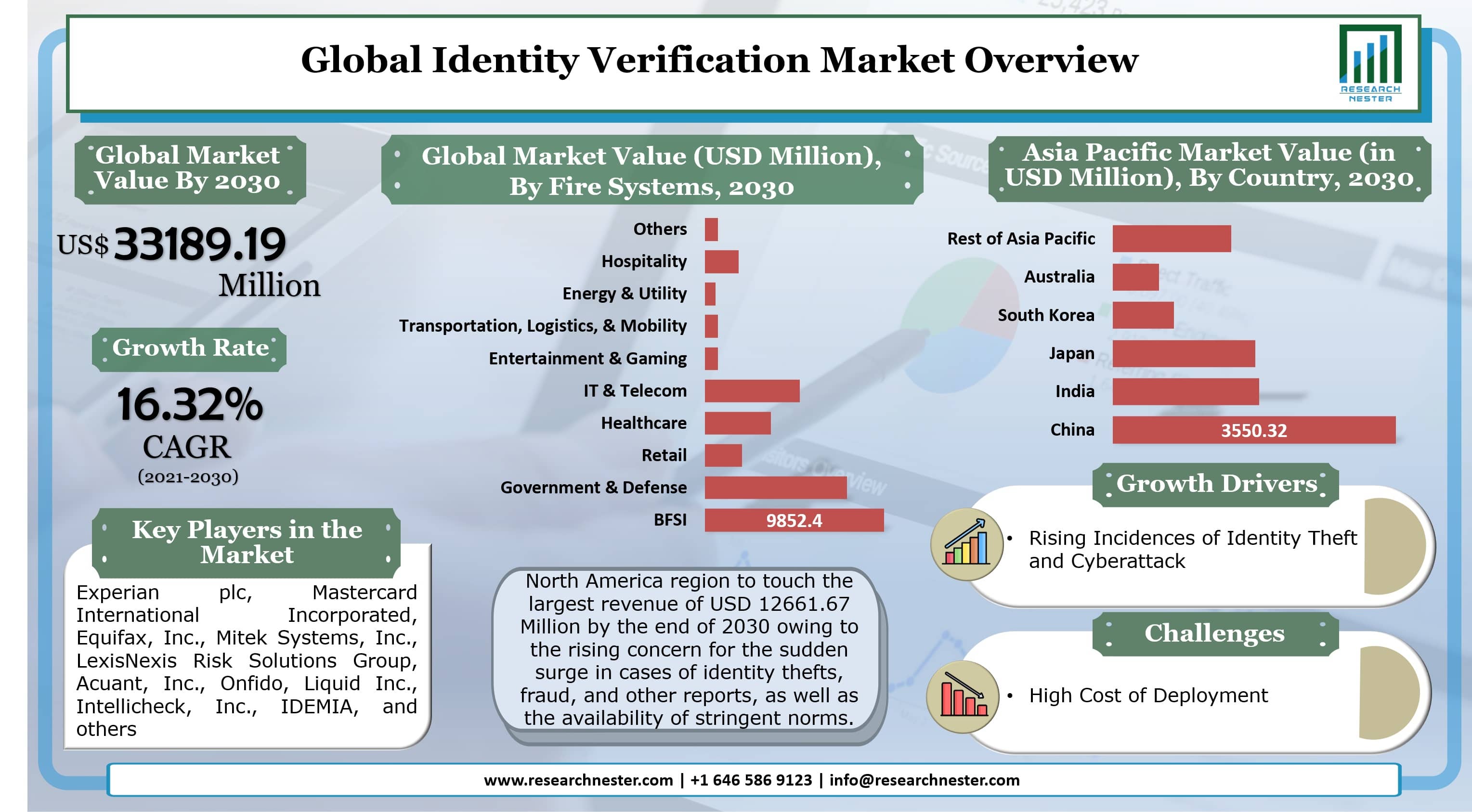 The market is also anticipated to grow on account of the growing initiatives of the government of countries worldwide to form stringent policies and address the rising prevalence of online security. Several nations around the globe are increasingly opting for solutions, such as know your customer (KYC) and anti-money laundering (AML). Moreover, with the increasing trends of bring your own device (BYOD), organizations are working on formulating policies and standards to adopt zero trust security features.

Regionally, the global identity verification market is segmented into five major regions including North America, Europe, Asia Pacific, Latin America and Middle East & Africa region. The market in North America region is anticipated to register the largest revenue of USD 12661.67 Million by the end of 2030, up from a revenue of USD 2855.35 Million in the year 2020. The growth of the market in the region can primarily be attributed to the availability of stringent government norms and policies to reduce cybercrime activities, as well the growing prevalence of identity thefts in the region. In the other statistics by the Consumer Sentinel Network of the FTC, the total number of frauds, identity theft and other reports recorded in the United States grew from 325519 cases in the year 2001 to 4720743 cases in the year 2020. 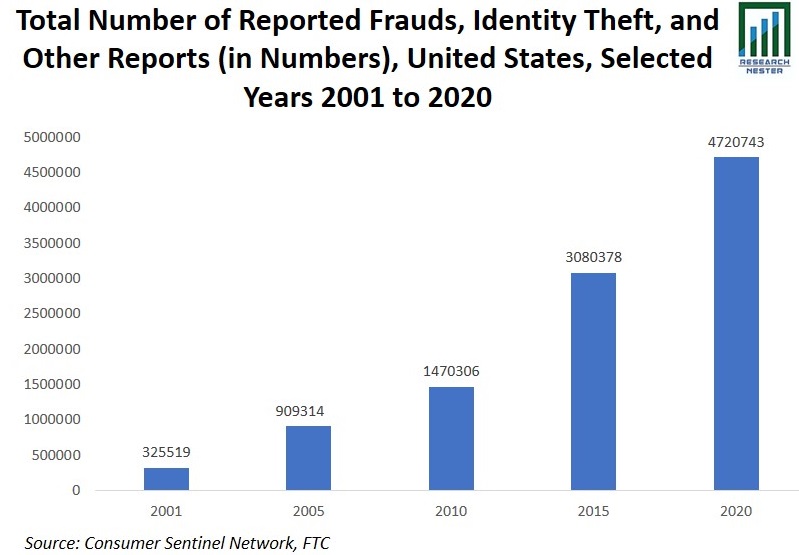 1) What are the major factors driving the growth of the identity verification market?

Ans: The rising incidences of identity theft and cyberattack, and the increasing initiatives by the government to promote cyber security are some of the major factors anticipated to drive the market growth.

2) What would be the CAGR of identity verification market over the forecast period?

3) What are the challenges affecting the identity verification market growth?

Ans: The high cost of deployment is one of the major factors estimated to hamper the market growth.

4) Which region will provide more business opportunities for growth of identity verification market in future?

Ans: The market in North America region is anticipated to register the largest revenue of USD 12661.67 Million by the end of 2030 and display significant business opportunities.

5) Who are the major players dominating the identity verification market?

7) What are the segments in the identity verification market?

8) Which segment captures the largest market size in verification type segment in the identity verification market?

Ans: The biometric authentication segment is anticipated to garner the largest revenue of USD 11702.06 Million by the end of 2030 and display significant growth opportunities.