Extensive insights into the Growth of Hydrofluoroolefins Market amidst COVID-19

The global hydrofluoroolefins (HFOs) market is estimated to garner a substantial revenue by growing at a robust CAGR over the forecast period, i.e., 2022 – 2031. The growth of the market can be attributed primarily to the growing usage of HFOs in applications such as a foam blowing and automotive-based air conditioning systems. Along with this, increasing utilization of the material to manufacture polyurethane foams, which are widely used in the construction and automobile sectors, coupled with high production of vehicles globally are also expected to drive market growth significantly in the forthcoming years. According to the International Organization of Motor Vehicle Manufacturers, about 91.786 million vehicles were produced globally in 2019, out of which 67.149 million were cars and remaining 24.637 million were commercial automobiles. Furthermore, on decomposition, HFOs break down to trifluoroacetic acid (TFA) in atmosphere, a non-toxic compound with zero-ozone depletion properties. The environment-friendliness of the product is projected to offer abundant growth opportunities to the market in the near future. 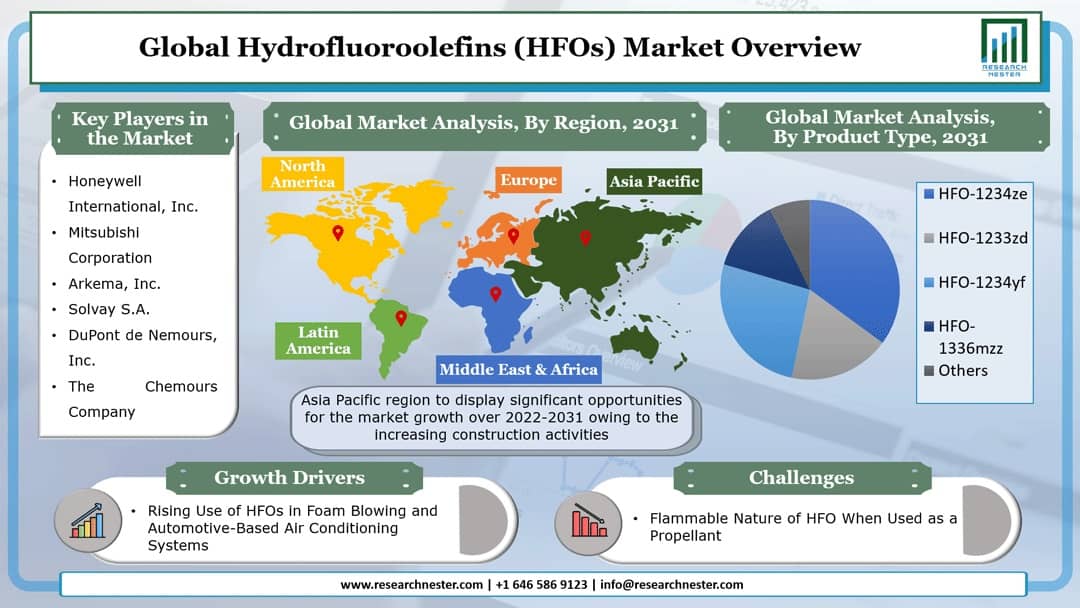 The market is segmented by application into commercial refrigeration, domestic refrigeration, foam blowing agents, aerosol propellants, mobile air-conditioning systems, precision solvent cleaners, and others. Out of these, the foam blowing agents segment is anticipated to hold the largest share in the global hydrofluoroolefins (HFOs) market. This can be accounted to the high utilization of HFOs as a blowing agent for manufacturing polyurethane foam, which are further used in construction and automotive industries. Apart from these, the mobile air-conditioning systems segment is assessed to observe significant growth during the forecast period owing to the increasing investments from companies to develop more eco-friendly alternatives for air conditioning.  Additionally, on the basis of product type, the HFO-1234yf segment is predicted to acquire the largest share by the end of 2030, which can be credited to the high energy efficiency and emission of lesser greenhouse gases by this type of HFO. CLICK TO DOWNLOAD SAMPLE REPORT

Regionally, the global hydrofluoroolefins (HFOs) market is segmented into five major regions including North America, Europe, Asia Pacific, Latin America and the Middle East & Africa region. The market in Asia Pacific is estimated to witness noteworthy growth over the forecast period on the back of the rise in construction activities, and growing production of automobiles in the emerging economies of the region. For instance, the Gross Value Added by the construction sector in India was valued at more than USD 190 billion in 2019-2020, up from about USD 180 billion in 2018-2019. Moreover, the North America expected to acquire the largest share during the forecast period. This can be ascribed to the introduction of environmental regulations for controlling global warming in the region, such as Significant New Alternatives Policy (SNAP) Program of the U.S. Environmental Protection Agency. In addition, strong presence of major market players is also projected to boost the market growth in the region in the coming years. 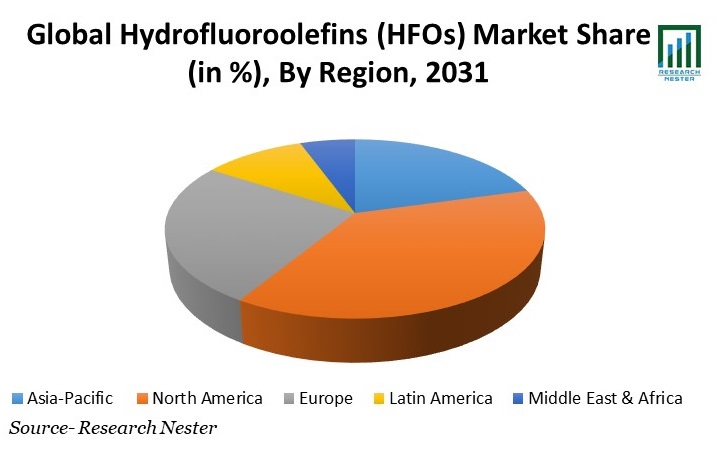 The global hydrofluoroolefins (HFOs) market is further classified on the basis of region as follows:

Our in-depth analysis of the global hydrofluoroolefins (HFOs) market includes the following segments:

What are the major factors driving the growth of the hydrofluoroolefins (HFOs) market?

The major factors driving market growth are growing usage of HFOs in foam blowing and automotive-based air conditioning systems, and non-toxic nature of the material.

What would be the CAGR of hydrofluoroolefins (HFOs) market over the forecast period?

Who are the major players dominating the hydrofluoroolefins (HFOs) market?

What are the segments in the hydrofluoroolefins (HFOs) market?

The market is segmented by product type, application, end user industry, and by region.

Which segment captures the largest market size in the application segment in the hydrofluoroolefins (HFOs) market?

The foam blowing agents segment is anticipated to hold largest market size and is estimated grow at a notable CAGR over the forecast period and display significant growth opportunities.

Flammability of the compound when used as a propellant estimated to hamper the market growth.

Which region will provide more business opportunities for growth of hydrofluoroolefins (HFOs) market in future?

Asia Pacific will provide more business opportunities for market growth owing to the rise in construction activities, and growing production of automobiles in the emerging economies of the region.