High-performance computing (HPC), in general, is the practice of amassing computing power through a way that could deliver performance that is hundreds or thousands of times more than a typical desktop or a workstation. HPC technologies are used in order to solve large problems in science, engineering or business. Supercomputers are the resultant of the need for developing machines with superior capabilities that can understand, analyze and process huge amounts of data within a few microseconds. The scale of the supercomputers is significantly huge and few thousand processors or more are needed to build one of these exotic machines. These supercomputers are typically made of the same components, such as CPUs, memory, disks, OS and others but the number is in thousands when compared to a normal PC or a workstation or a cluster of computers put together. These HPC systems are used typically for research on space, origins of universe, climate change, and medical sciences, including research for COVID-19 disease.

Increasing internet connectivity, AI and big data from mobiles, PCs, tablets and IoT, developing modelling simulations to deploy for problem solving in the domain of healthcare, BFSI, manufacturing, space and others, are some of the factors anticipated to promote the growth of the global high-performance computing market. The market is estimated to grow with a notable CAGR during the forecast period, i.e., 2021-2029.

The global high-performance computing market is segmented by component, application, deployment and end users. The component segment is further bifurcated into hardware and software, out of which, the hardware segment is estimated to hold leading shares as millions of hardware components such as processors, servers and others are used for constructing a supercomputer.

The technological progression and adoption over the last few decades have significantly impacted the amount of data that flows through the data servers globally. This has raised the need to address the issue of managing data traffic and processing the raw data into filtered information. Tech giants, such as IBM, Hewlett Packard Enterprise Development LP and others have designed superior computers with huge processing capabilities that can process numerous tasks at a very less time. The increasing number of complex applications, in each and every business process and research, is significantly boosting the demand for the deployment of HPC. The adoption of high-performance computing (HPC) systems with computer-aided engineering (CAE) software for high-fidelity modeling simulation is on the rise among various industries, such as automotive, manufacturing, and healthcare robotics. New subjects, such as genomic sequencing, machine learning, deep learning, speech and facial recognition, pattern recognition, climate change and others are being executed on HPC systems. Moreover, these computing systems are known for its contribution to national security, industrial competitiveness, scientific progress, and quality of life. The HPC market is experiencing huge demand from the BFSI sector among other end-user applications. These organizations are modernizing their IT infrastructure with innovative solutions for competitive differentiation. HPC offers greater speed, agility, and scalability, which are deemed essential in the industry. Using HPC computation capabilities, scientists and researchers get a better decision and analysis, and a simulation support system for determining possible paths by objects under experiments, influenced by different physical predictor variables. This saves time and R&D expenses and assists in building a more qualitative and precise product. These are some of the considerable factors that are estimated to promote the growth of the global HPC market. Additionally, this growth is backed by HPC being recognized as one of the powerful tools in assisting the healthcare sector and the researchers to fight against the COVID-19 pandemic. CLICK TO DOWNLOAD SAMPLE REPORT

The scientific breakthrough in semi-conductor technologies and design of superior processors by companies such as AMD and Intel and the growth of cloud infrastructure, the global HPC market is estimated to witness noteworthy opportunities throughout the forecast period. On the other hand, the market is gaining traction owing to their cost-effective pricing model offered by the service providers. Cloud HPC offer unlimited storage and instantly available and scalable computing resources at an optimum cost, this has become a critical factor in driving the market as the volume, variety, and velocity of data generated over the years have evolved exponentially and are expected to further increase with the deployment of 5G technology.

The potential factor that might affect the growth of the market is the increasing security threats and data breaches that target the HPC systems on account of its clustered nature. Clustered HPC systems require multiple management systems to function and it is difficult to contain its vulnerabilities in security.

Lack of Product Awareness in SMEs and Requirement of High Capital

SMEs in developing countries, lack the awareness and significance of HPC systems in their BPMs and the setup costs of HPC systems requires huge capital. The lack of technical expertise is also an important factor that is expected to negatively influence the HPC market.

Our in-depth analysis of the high-performance computing market includes the following segments:

On the basis of regional analysis, the high-performance computing market is segmented into five major regions including North America, Europe, Asia Pacific, Latin America and Middle East & Africa region. The market for high-performance computing in North America is anticipated to hold the largest share on account of the presence of leading market players in the region which manufacture and market HPC solutions and services. Moreover, the growing requirements for private cloud-based IaaS platforms are met in this region which further increases the product demand. The market in Asia Pacific region, on the other hand, is predicted to grow at the highest rate during the forecast period as a result of growing acceptance of cloud-based solutions and emerging technologies such as IoT and edge computing, especially in SMEs in countries such as China, India and Japan, which is further resulting in the increased demand for HPC solutions and services. 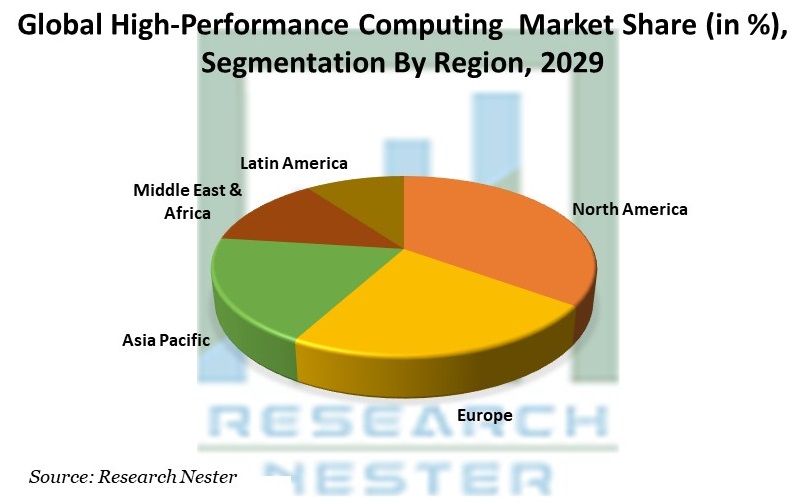 The global high-performance computing market is further classified on the basis of region as follows: