Extensive insights into the Growth of High-End Inertial Sensors, IMUs And INS Market amidst COVID-19

The global High-end Inertial Sensors, IMUs & INS Market reached USD 3,191.5 Million in 2018 and is expected to attain a market value of around USD 5,150 Million by the end of 2027 by registering a CAGR of 5.6% across the globe during the forecast period 2019-2027. The global demand for defense based high-end inertial sensors is increasing on the back of significant growth in military strengthening. Additionally, transformation and increasing automotive production in countries such as India, China, Indonesia, Sweden, Mexico, Finland and Brazil is backing the emerging installation of the high end inertial sensors in the automotive sector.

The growing demand for safety and security in automobiles is one of the main factors that is playing a vital role in the growth of the market. According to the World Health Organization, globally, more than 1.55 million people are killed in road accidents every year, and about 50 million people get injured. MEMS sensors play a critical role in improving the safety features of vehicles, significantly contributing to the growth of the market.

Emerging applications that need the most advanced sensors, control and interface systems offer various opportunities for further expansion of the growing global market. Various opportunities are being explored by several manufacturers including the option of partnering with end-users to understand requirements that will drive high-end inertial systems’ specifications in terms of accuracy, volume, shielding and cost.

The global high end inertial sensors market is segmented by regions into North America, Latin America, Europe, Asia-Pacific and Middle East and Africa, out of which, North America is projected to gain a leading market share of 30.50% in terms of value by 2027 owing to the recovery of economy from the sub-prime crisis. In terms of volume, the market in Asia Pacific is slated to account for highest share by 2027 which can be attributed to the prevalence of enormous market potential and high prevalence of geo-political risks and other factors. With the presence of some of the largest INS and IMU manufacturers such as, Northrop Grumman Corporation, Honeywell International Inc., Moog Inc., General Electric Company and others across the U.S., the market is expected to propel significantly in North America region during the forecast period. DOWNLOAD SAMPLE REPORT HERE 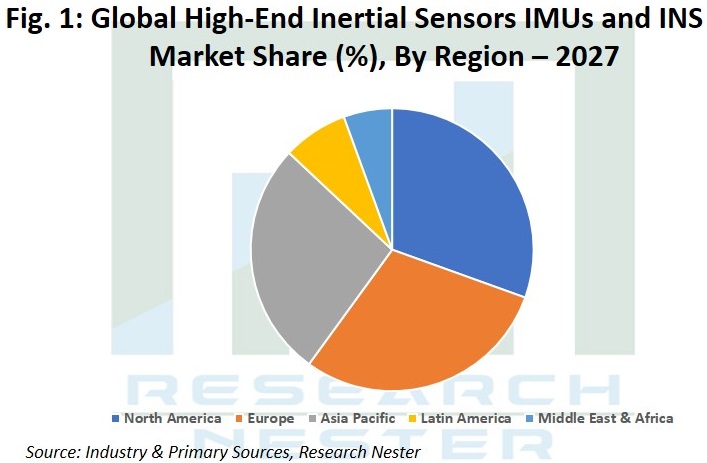 The global high-end inertial sensors, IMUs and INS market has been segmented on the basis of technology into Mechanical Gyro, Fiber Optics Gyro, Micro-Electro-Mechanical System (MEMS), Vibrating Gyro, Hemispherical Resonator Gyro, Ring Laser Gyro and others. Among these, Ring Laser Gyro, occupies the largest market share (in terms of value) globally and is anticipated to earn revenues to the tune of USD 1265.96 million by end of 2027. Additionally, Global Ring Laser Gyro segment is projected to achieve a Y-O-Y growth rate of 5.40% in terms of value by 2027 as compared to the previous year.

The global high-end inertial sensors market is segmented by application into industrial, defense, automotive, aerospace and others. Rising application of robots in wide range of end-user industries around the globe is anticipated to generate a rise in demand for inertial navigation units for positioning and measuring purposes. Besides, increasing mapping, surveying and positioning geological practices is projected to drive the other high-end inertial sensors application segment coherently. 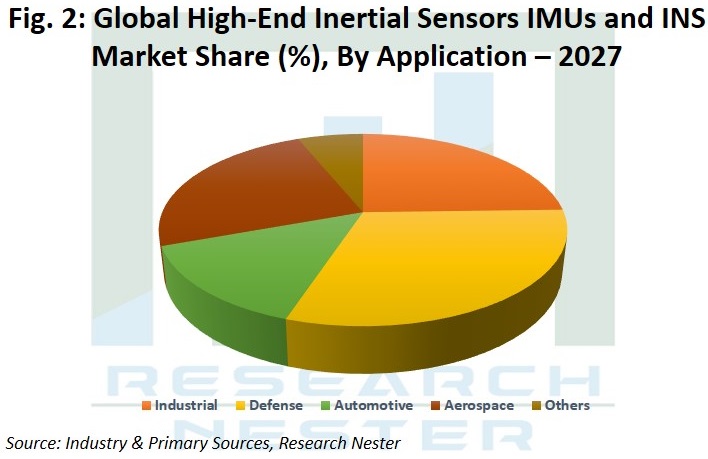 The global high-end inertial sensors market, on the basis of performance grade is divided into five major segments namely navigation, commercial, marine, tactical and space grade. Out of these, commercial grade segment is expected to grow at highest CAGR of 6.3% during the forecast period, whereas the highest revenue is estimated to be generated by navigation grade segment in 2027. One major factor contributing to the growth in revenues of tactical grade segment may be attributed to the rising application of MEMS technology in tactical grade Inertial Navigation Systems that has gained prominence lately, which is expected to replace traditional sensors for tactical and navigation grade applications across U.S. rapidly in the forthcoming years.

Rapid industrialization and automation in developing countries is one of the key factors responsible for the growth of global high-end inertial sensors, IMUs & INS market during the forecast period. There is an increasing trend of unmanned aerial, water and ground vehicles on the back of their precise navigational technology applications, thereby positively effecting the demand for high end inertial navigation systems in the market.

Additionally, the development of advanced MEMS based IMUs is based on improved noise cancellation coupled with low cost GPS/INS integration. It has helped the high end inertial sensors to perform better in different stochastic and dynamic situations in comparison to traditional techniques.  This is expected to drive the growth rate of the market during the forecast period.

Although global high-end inertial sensors IMUs and INS offer several benefits, it suffers from some restraints which can be attributed to low accuracy of gyroscope and accelerometer, and risks associated with demand-supply. Additionally, high production cost is estimated to dampen the growth of the market over the forecast period.

During October 2018, Safran, one of the key market players launched a new family of naval inertial navigation systems designed to meet the expectations of modern navies for both surface vessels and submarines. This product launch has aided the company with its deployment strategy for the HRG Crystal™ gyro.

In addition to the above, sustained efforts are being adopted by several key players in the market to enhance their presence globally and to gain a larger market share by adopting various strategies that include acquisitions and joint ventures with other players to enhance their technical capabilities and to introduce new technological innovations in the growing and competitive high-end inertial sensors, IMUs and INS market.