The global hemorrhoid drugs market is anticipated to record a robust CAGR over the forecast period, i.e., 2021-2029. The market’s growth is influenced by the increasing cases of hemorrhoids backed by various factors such as increasing prevalence of lifestyle-based diseases, lack of physical exercise, obesity, increasing alcohol consumption, low fiber intake in diet, and growing demand for treatment options. According to the World Health Organization statistics, over 38 million children, below the age of 5 were suffering from obesity in 2019. In fact, the number of obese people globally, has tripled since 1975. Increasing number of obese people is, in turn, expected to increase the prevalence of hemorrhoid, which is projected to positively influence the market growth. Moreover, rising prominence of lifestyle diseases, such as diabetes, and hypertension, is anticipated to elevate the number of people suffering from piles. According to another data by the WHO, over 422 million people around the globe suffer from diabetes, and it causes about 1.6 million deaths every year. On account of these factors, the demand for hemorrhoid drugs is anticipated to increase over the forecast period. CLICK TO DOWNLOAD SAMPLE REPORT 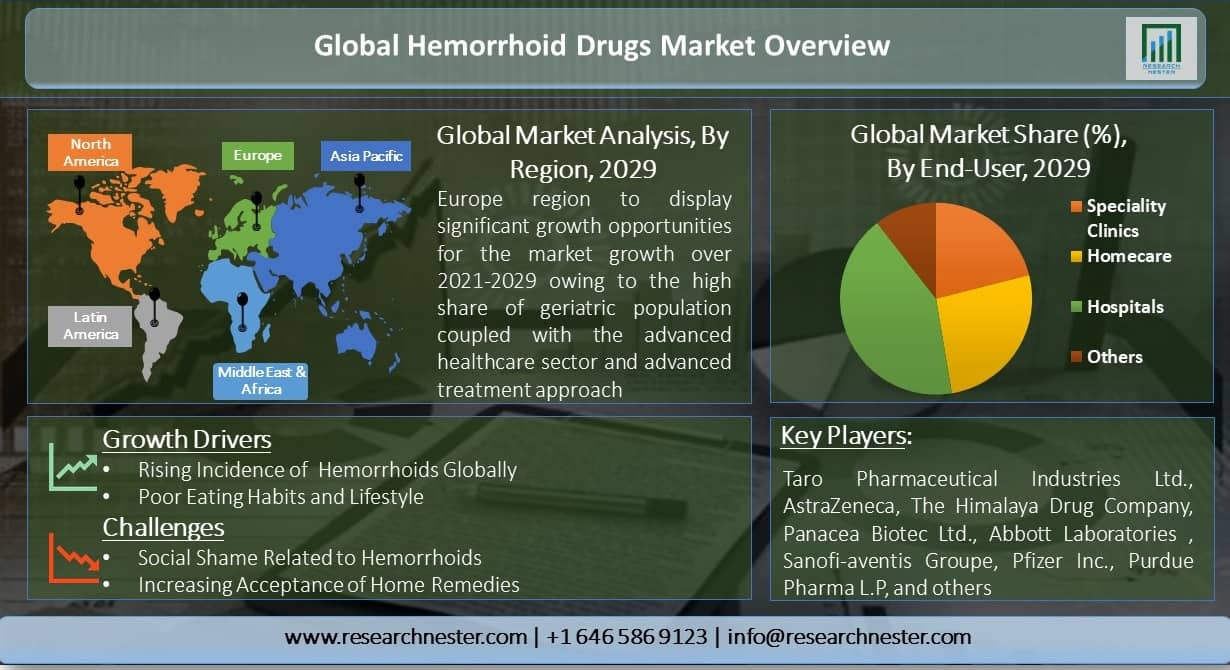 The market in the Europe region is estimated to hold a major market share in the market over the forecast period on the back of high geriatric population, coupled with availability of advanced treatment options, better reimbursement policies and fast commercialization of novel products. As per the data by the World Bank, 20.463% of the total population of the European Union is aged above 65 years, as of 2019. The EU includes 27 countries, including France, Belgium, Germany, and Luxemburg among others. Moreover, presence of well-established healthcare infrastructure and high disposable income in the region are anticipated to propel the growth of the hemorrhoid drugs market in the region. The market in the Asia Pacific is estimated to witness the highest CAGR during the forecast period, owing to the increasing population, growing healthcare sector, and emerging pharmaceutical companies. 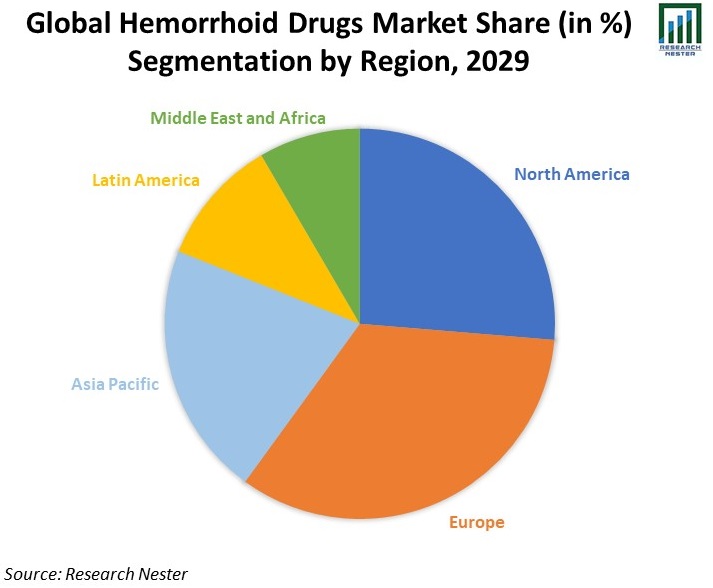 The global hemorrhoid drugs market is further classified on the basis of region as follows:

Our in-depth analysis of the global hemorrhoid drugs market includes the following segments:

What are the major factors driving the growth of the hemorrhoid drugs market?

Growing prevalence of piles or hemorrhoids on the back of poor diet, lifestyle diseases and obesity, is the major factor driving the market growth.

What would be the CAGR of hemorrhoid drugs market over the forecast period?

What are the challenges affecting the hemorrhoid drugs market growth?

Social shame and stigma related to hemorrhoids is a major factor estimated to hamper the market growth.

Which region will provide more business opportunities for growth of hemorrhoid drugs market in future?

The market in Europe will provide the highest growth opportunities for the market during the forecast period on the back of increasing geriatric population and improving healthcare sector.

Who are the major players dominating the hemorrhoid drugs market?

What are the segments in the global hemorrhoid drug market?

The market is segmented by drug type, disease type, distribution channel, end-user and by region.

Which segment captures the largest market size in the end-user segment in the hemorrhoid drug market?

The hospital segment is anticipated to hold the largest market size during the forecast period on the back of increasing patient pool for hemorrhoids.