Introduction to Hemophilia A Drugs

Hemophilia is a condition in which the body is not able to form blood clots in order to stop bleeding. In a normal person’s body, the blood contains certain chemical substances which create a clot in case of bleeding. However, when a person has hemophilia, some clotting factors are absent which leads to the body being unable to form any clot. This result in continuous bleeding and eventually, severe loss of blood.

Hemophilia A is a rare genetic disorder of the blood characterized by a deficiency in the production of plasma protein factor VIII, which results in a reduced clotting property of the blood. Hemophilia drugs are given to hemophilic patients in order to provide them with these clotting factors artificially.

The hemophilia A drugs market is anticipated to record a significantly high CAGR over the forecast period, i.e., 2020-2028. The market is segmented by product, by route of administration, by distribution channel and by region, out of which, the product segment is further segmented into plasma derived coagulation factor concentrate, recombinant coagulation factor concentrates, antifibrinolytics, desmopressin and others. The segment for plasma derived coagulation factors is anticipated to hold the largest share in the hemophilia A drugs market on account of highest usage as compared with other products. Plasma derives coagulation factors further can be segmented into factors such as factor VIII, factor IX, factor XIII, von Willebrand factor and active prothrombin complex concentrates. As a result of this, the segment accounts for the highest share in the market. The segment for route of administration is further segmented into intravenous, oral, nasal and others, out of which, the intravenous segment currently holds the largest share in the market. Since the majority of Hemophilia A drugs are in the form of injectable drugs, the market share of this route of administration is high. Moreover, administration of the drug directly into the blood is preferred over other routes. The segment for distribution channel is segmented into hospital pharmacy, retail pharmacy and online pharmacy. The segment for retail pharmacy is predicted to hold the leading share in the market as a result of growing preference of people for buying medicines are the pharmacies near their homes. On the other hand, the online pharmacy segment is anticipated to witness the highest growth rate on account of increasing demand of buying products online as ease of convenience of buying medications through online portals and having them delivered at home.

Rising Instances of Genetic Disorders to Boost the Market Growth

The cases of genetic disorders such as hemophilia have been growing significantly in the past few years and are estimated to grow further in the coming years. According to the National Hemophilia Foundation, Hemophilia A occurs in 1 out of 5,000 live male births in the United States. Additionally, hemophilia A is four times more common than hemophilia B. About 20,000 people in the United States are estimated to have hemophilia. Globally, around 400,000 people are predicted to be hemophilic. The report mentioned that approximately 75% of people with hemophilia do not receive proper treatment. On the back of these statistics, the market for hemophilia A drugs is anticipated to grow over the forecast period. CLICK TO DOWNLOAD SAMPLE REPORT

The high costs associated with the drugs as well as the therapies available for hemophilia A treatment is predicted to make them unaffordable for a large section of the society, specially people belonging to the low and middle income countries. On the basis of this factor, the hemophilia A drugs market is estimated to observe limited growth in coming years.

Our in-depth analysis of the hemophilia A drugs market includes the following segments:

On the basis of regional analysis, the hemophilia A drugs market is segmented into five major regions including North America, Europe, Asia Pacific, Latin America and Middle East & Africa region. Hemophilia A drugs market in North America is projected to hold the leading share in the market. This can be attributed to the recent advancements in the healthcare industry as well as the research and development of new drugs. Moreover, increased drug approvals further contribute towards the growth of market in this region. The market in Asia Pacific, however, is estimated to observe the highest growth rate over the forecast period as a result of rising number of patients with hemophilia A and growing awareness about the need for preventing and treating hemophilia in the region. 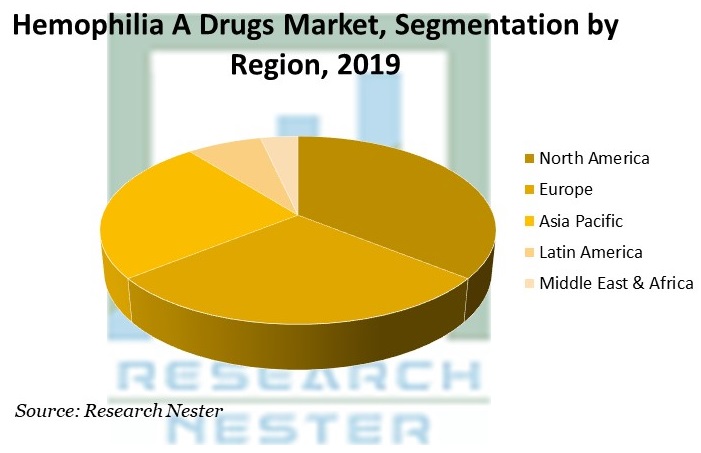 The hemophilia A drugs market is further classified on the basis of region as follows:

What are the major factors driving the growth of the Hemophilia A Drugs market?

Rising cases of hemophilia A and growing awareness among people about the requirement for effective drugs for treatment are major factors driving the market growth.

What would be the CAGR of Hemophilia A Drugs market over the forecast period?

The market is anticipated to attain a significant CAGR over the forecast period, i.e. 2020-2028.

Which region will provide more business opportunities for growth of Hemophilia A Drugs market in future?

Asia Pacific is estimated to provide more business opportunities for growth as a result of rising number of patients with hemophilia A and growing awareness about the need for preventing and treating hemophilia.

Who are the major players dominating the Hemophilia A Drugs market?