Head mounted devices are goggles that are technologically advanced and portable. It plays a critical role in Augmented Reality/Virtual Reality technology as it associates the users and the set-up. As it is a portable HMD display is adopted by defense services, and used in gaming for virtual reality, and in the medical sector. The invention of head mounted provided better comfort and enhancement in ergonomics to the users which in turn improved the experience of Augmented Reality/Virtual Reality technology.

The global head mounted devices market is estimated to garner a revenue of USD 460 Billion by the end of 2035 by growing at a CAGR of ~45% over the forecast period, i.e., 2023 – 2035. Further, the market generated a revenue of USD 5.3 Billion in the year 2023. The growth of the market can primarily be attributed to the skyrocketing adoption of AR and VR across the globe. For instance, more than 150 million people were observed to be using VR globally in 2018, while in 2020, approximately 50 million VR and 80 million AR users were stated to be living solely in the USA. Along with this, less cost of microdisplays, increasing demand for lightweight helmet mounted displays, and their portable nature drives the market growth. 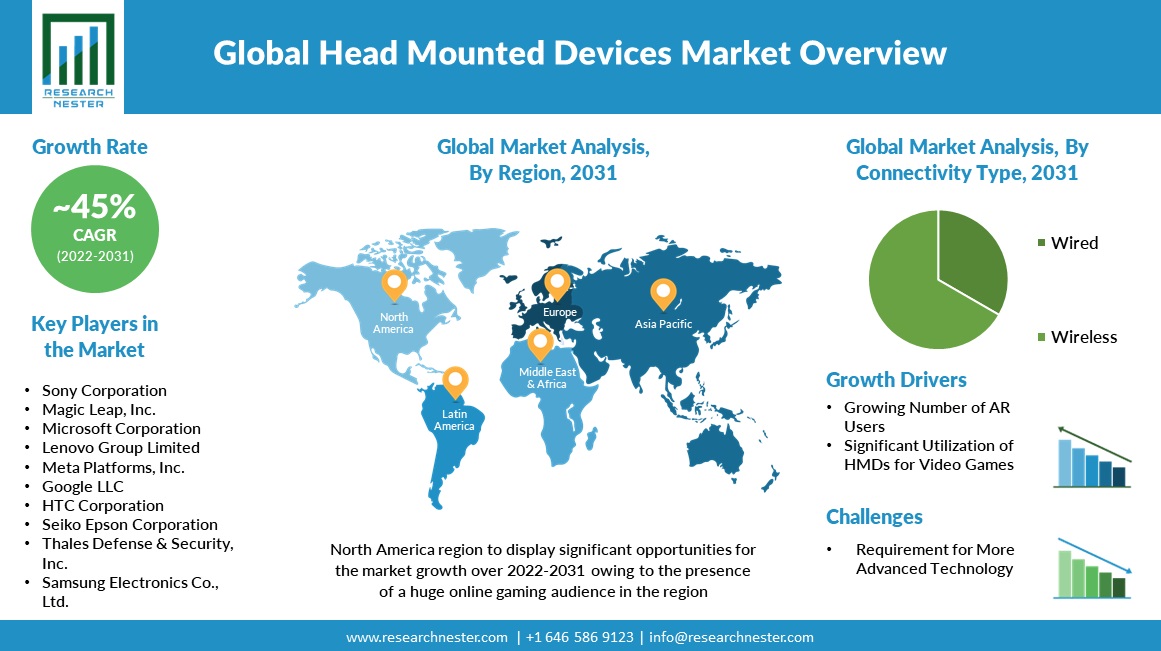 Furthermore, the global head mounted devices market is further projected to grow on the back of the rising inclination of people toward the virtual world over the forecast period. Additionally, ongoing development in the gaming industry has spurred the demand for head mounted devices. Head mounted devices are basically small displays & devices that are mounted on a hat or helmet and integrated into eyewear. Such devices do not block the vision of the user but project a virtual image in the real world to be witnessed. For instance, the unit sale of VR head-mounted devices was estimated for mobile at about 70% and for PCs, it was projected to be around 22% in 2020.

The global head mounted devices market is segmented and analyzed for demand and supply by connectivity type into wired and wireless, out of which, the wireless segment is expected to hold the largest market share over the forecast period. Escalating adoption of WLAN and other devices such as smartphones, remote control, TV, GPS system, and radios are anticipated to hike the growth of the segment during the forecast period. For instance, more than 20 billion devices were anticipated to be connected via a wireless local area network (WLAN) in 2021.

The North America region head mounted devices market, amongst the market in all the other regions, is projected to hold the largest market share by the end of 2035. The growth of the market in the region is ascribed to the presence of a huge online gaming audience. As of 2020, approximately 150 million adults in North America are involved in online gaming making it up to around 65% of the entire population. Furthermore, the presence of major key players and the increasing adoption of the latest technology is also anticipated to hike the growth of the market in the region over the forecast period. Moreover, the Asia Pacific region is further projected to hold the second largest share in the global head-mounted devices market over the forecast period on the back of the rising investment by major companies to develop the requisite technology.

1) What are the major factors driving the growth of the head mounted devices market?

Ans: Rising adoption of AR and VR across the globe and ongoing development in the gaming industry is estimated to majorly boost the market growth.

2) What would be the CAGR of head mounted devices market over the forecast period?

3) What are the challenges affecting the head mounted devices market growth?

Ans: The requirement for more advanced technology and the need for higher initial investment is estimated to challenge the market growth.

4) Which region will provide more business opportunities for growth of head mounted devices market in future?

Ans: The market in the North America region is projected to hold the largest market share by the end of 2035 and provide more business opportunities in the future.

5) Who are the major players dominating the head mounted devices market?

7) What are the segments in the head mounted devices market?

8) Which segment captures the largest market size in connectivity type in the head mounted devices market?

Ans: The wireless segment is anticipated to garner the largest market size by the end of 2035 and display significant growth opportunities.