·    November 2020- BYD announced that it will partner with Canadian Solar Inc. for providing advanced battery technology for the 100 MWac Mustang solar plant in Kings County, California.

The global grid scale battery market is estimated to garner a hefty amount of revenue and grow at a CAGR of ~15% over the forecast period, i.e., 2022 – 2030. The growth of the market can be attributed to the growing investments in renewable energy, and declining costs of grid-scale battery as a result of technological advancements in the energy industry. According to the Center for Climate and Energy Solutions, renewables accounted for 29 percent of the electricity generation in 2020. In addition, a record amount of over 256 GW of renewable power capacity was added globally during the same year. Along with these, concerns associated with the increasing carbon emissions in major cities is expected to create a surge in demand for renewable integration. This in turn is evaluated to drive market growth significantly in the forthcoming years. Furthermore, rising emphasis on rural electrification using grid-scale battery deployment, and government initiatives to boost energy efficiency, especially in developed and developing nations is projected to offer ample growth opportunities to the market in the near future. 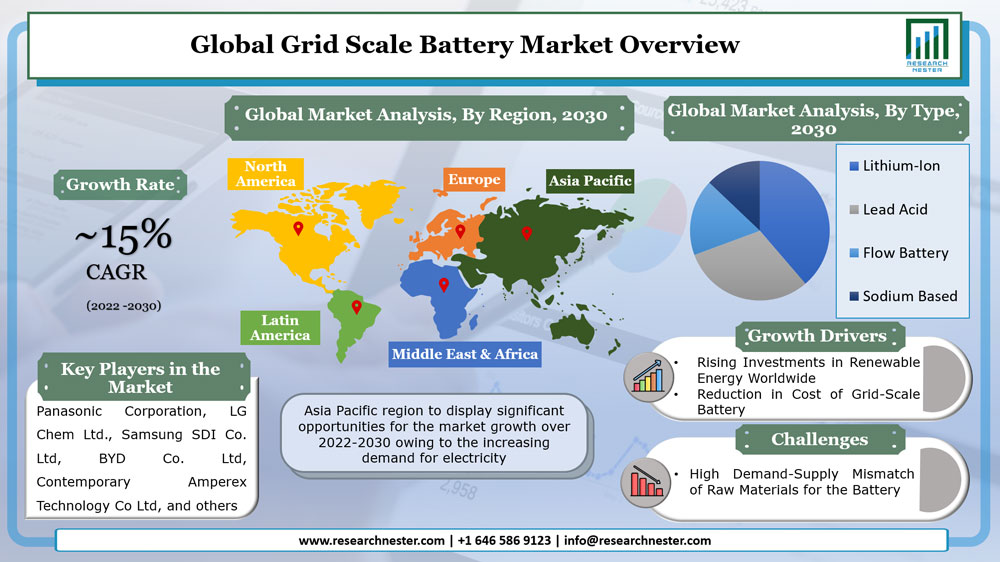 The market is segmented by application into frequency regulation, peak shaving, bill management, load shifting, renewable integration, and others, out of which, the renewable integration segment is anticipated to hold the largest share in the global grid scale battery market. Factors such as increased reliability, and attainment of renewable targets with high energy efficiency by grid scale batteries are assessed to drive growth of the market segment in the future. Additionally, on the basis of type, the lithium-ion segment is predicted to acquire the largest share during the forecast period, which can be credited to the improved manufacturing capacity and technological innovations in the lithium-ion battery industry. Apart from these, decline in price, coupled with recycling of Li-ion batteries used in electric vehicles are also predicted to boost the growth of the market segment. CLICK TO DOWNLOAD SAMPLE REPORT

On the basis of geographical analysis, the global grid scale battery market is segmented into five major regions including North America, Europe, Asia Pacific, Latin America and the Middle East & Africa region. The market in Asia Pacific is estimated to witness noteworthy growth and gather the largest share over the forecast period on the back of the growing electricity demand, and rapid urbanization in the region. As per the United Nations’ Department of Economic and Social Affairs, it is projected that India and China will have added 416 million and 255 million urban dwellers respectively. In addition, expanding grid capacity of developing nations, and increasing deployment of renewables for energy generation are also expected to accelerate the market growth in the region in the coming years. Moreover, the market in North America is projected to grab a notable share by the end of 2030 owing to the growing focus of government for utilizing renewable energy storage in residential, non-residential and utility sectors in the region. 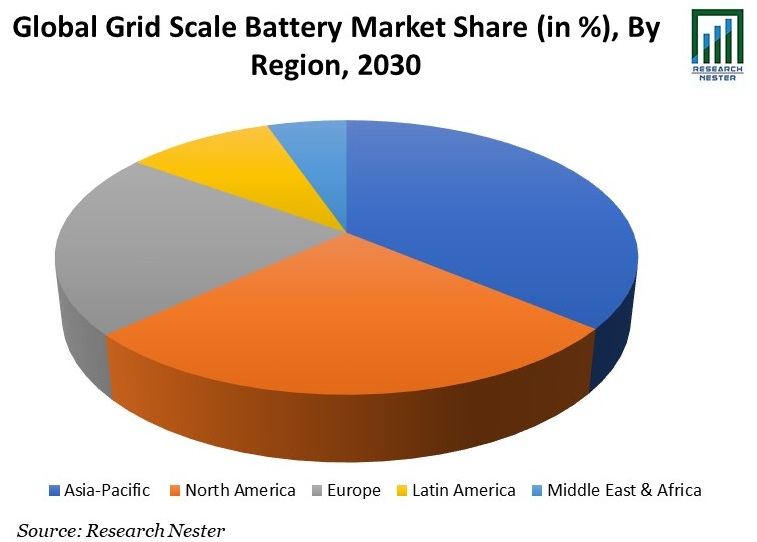 The global grid scale battery market is further classified on the basis of region as follows:

What are the major factors driving the growth of the grid scale battery market?

What would be the CAGR of grid scale battery market over the forecast period?

What are the challenges affecting the grid scale battery market growth?

High demand-supply mismatch of raw materials for the battery is estimated to hamper the market growth.

Which region will provide more business opportunities for growth of grid scale battery market in future?

Asia Pacific will provide more business opportunities for market growth owing to the growing electricity demand, and rapid urbanization in the region.

Who are the major players dominating the grid scale battery market?

What are the segments in the grid scale battery market?

Which segment captures the largest market size in the type segment in the grid scale battery market?

The lithium-ion segment is anticipated to hold largest market size and is estimated to grow at a robust CAGR over the forecast period and display significant growth opportunities.