The global green ammonia market is estimated to garner a revenue of USD 851.3 Million by the end of 2028 from USD 13.15 Million in 2019 by growing with a CAGR of 62.84% during the forecast period, i.e., 2021-2028. The growth of the market can be attributed primarily to the rapidly increasing need to reduce greenhouse gas emissions worldwide, along with the increasing adoption of energy-efficient technology across countries globally. 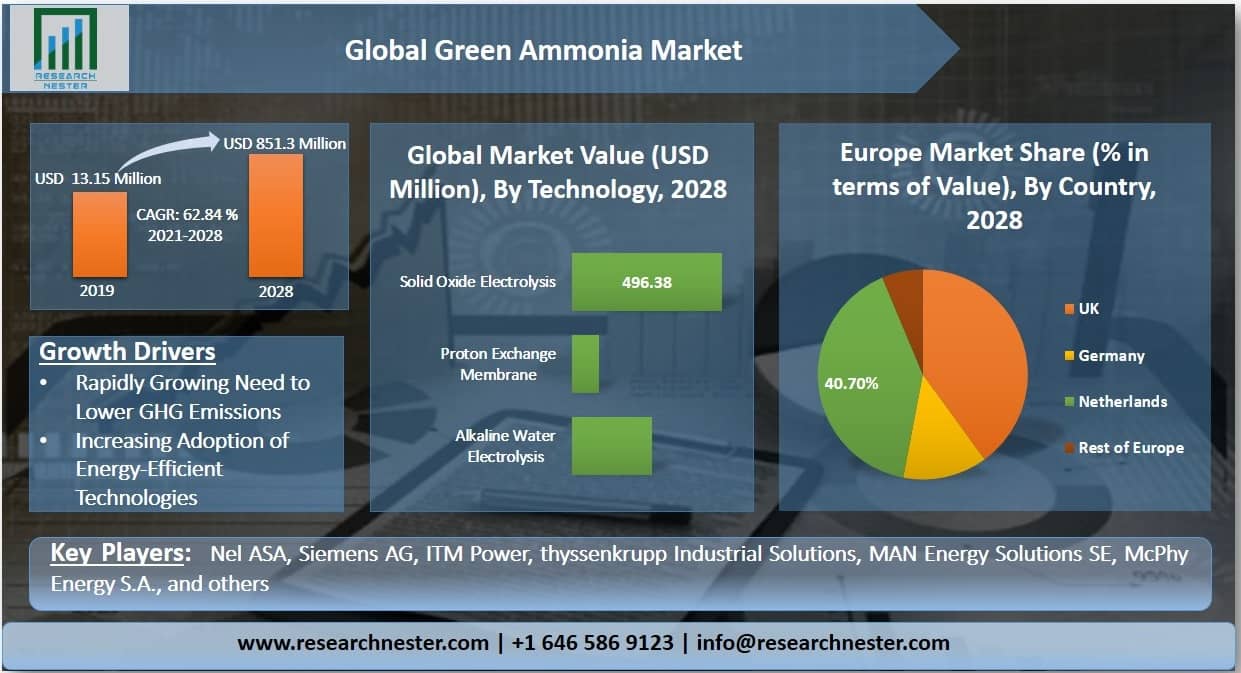 Green ammonia is used across various industries as a building block such as fabrics, pesticides, fertilizer, plastics, explosives, and dyes in residential and commercials applications and it is the 2nd most-produced chemical globally. However, the traditional procedure of producing ammonia consumes fossil fuels such as coal, natural gas, and others, on account of which it is responsible for global greenhouse gases emission. The conventional process of ammonia production results in the production of high amount of carbon dioxide, on account of which there is an increasing demand for renewable energy sources for the production of green ammonia. According to the statistics by Climate Watch, total greenhouse gas emissions around the world increased from 32645.91 MtCO2e in 1990 to 48939.71 MtCO2e in 2018. To reduce the level of greenhouse gas emission, many market players are shifting their focus towards ecological process, which is further anticipated to drive the market growth. 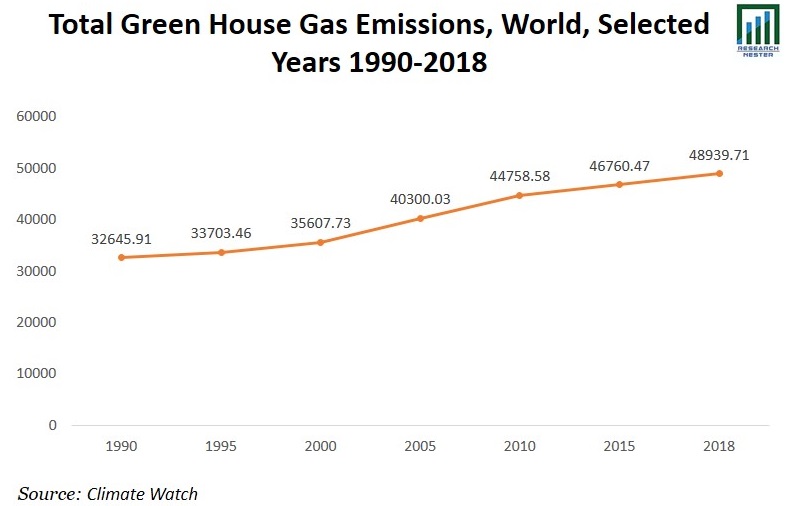 On the other hand, energy efficiency programs, which use smart technologies for achieving decarbonization goals is a significant trend in the market.  The adoption of the energy-as-a-service model is among a key method for capturing value associated with the energy efficiency improvements. Nevertheless, service models have significantly improved the energy efficiency gap via aligning the incentives between consumers and energy service companies in order to reduce the overall energy consumption, which is also anticipated to create numerous opportunities for market growth. Furthermore, the increasing use of alkaline water technology, proton exchange membrane technology, solid oxide electrolysis and others for the production of green ammonia, is also anticipated to drive the market growth during the forecast period.

The global green ammonia market is segmented by technology into alkaline water electrolysis, proton exchange membrane, and solid oxide electrolysis. Amongst these segments, the solid oxide electrolysis segment is anticipated to hold the largest market share throughout the forecast period and further attain a market revenue of USD 496.38 Million by the end of 2028. The solid oxide electrolysis (SOEC) process is one of the most prominent methods of producing green ammonia. The production process splits water to generate hydrogen, which is then utilized for synthesis of green ammonia. The technology is beneficial than other processes as it uses the internal wasted heat generated during splitting water molecule and decreases the amount of overall energy required during the process. The SOEC technology is majorly used for the large-scale production of hydrogen. The rising awareness among the chemical manufacturers for the process is further projected to drive the growth of the segment during the forecast period. Based on application, the market is segmented into industrial feedstock, green fertilizer, marine fuel, power generation, and others. Amongst these segments, the power generation segment is projected to hold the largest market share during the forecast period and further touch USD 393.81 Million by the end of 2028.

What are the major factors driving the growth of the green ammonia market?

The growing need to reduce greenhouse gas emissions, along with the rise in adoption of energy-efficient technologies, are some of the factors anticipated to drive the market growth.

What would be the CAGR of green ammonia market over the forecast period?

What are the challenges affecting the green ammonia market growth?

The high initial capital investment, along with the lack of awareness about green ammonia are estimated to hamper the market growth.

Which region will provide more business opportunities for growth of green ammonia market in future?

The market in the Asia Pacific is anticipated to display significant business opportunities in the future.

Who are the major players dominating the green ammonia market?

What are the segments in the green ammonia market?

The market is segmented by technology, application, and by region.

Which segment captures the largest market size in technology segment in the green ammonia market?

The solid oxide electrolysis segment is anticipated to hold largest market share over the forecast period and further attain a market revenue of USD 496.38 Million by the end of 2028.