The global graphite powder market is estimated to garner a revenue of ~USD 25 Billion by the end of 2031 by growing at a CAGR of ~5% over the forecast period, i.e., 2022 – 2031. Further, the market generated a revenue of ~USD 15 Billion in the year 2021. The primary growth for the graphite powder market is the expansion of construction industry across the world. Recent estimates calculated that the revenue collected by the construction industry was almost USD 2 trillion in 2019. 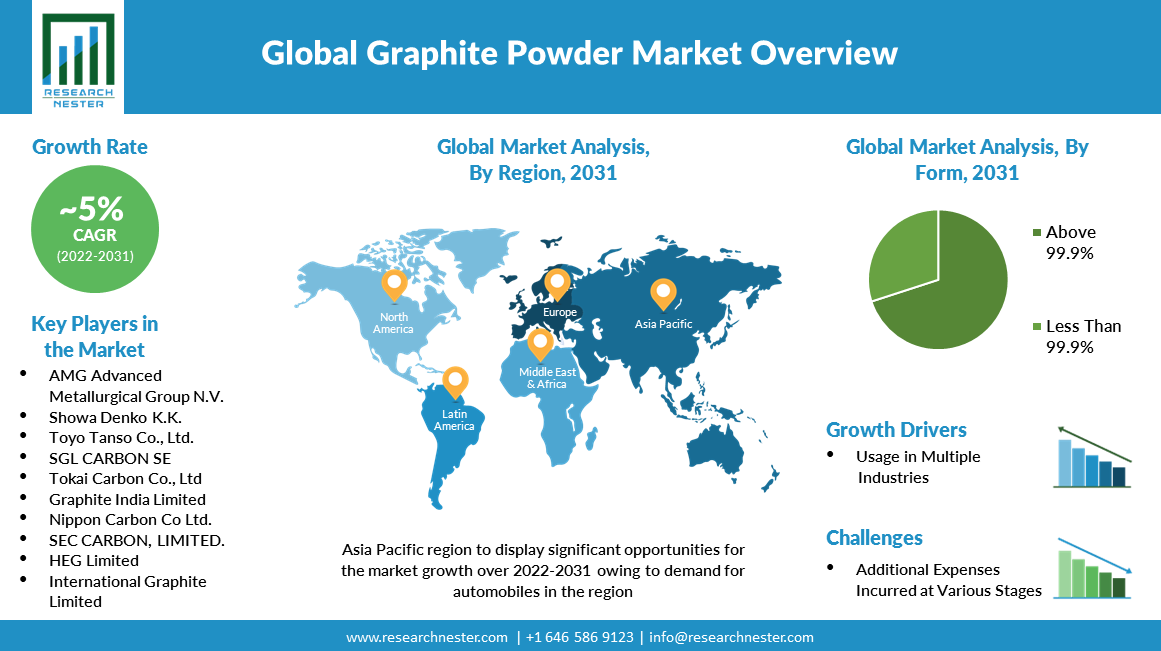 A non-metal, graphite is a form of coal has metallic processes such as high stiffness, strength, highly-durable and is a good conductor of electricity and heat. This calcium salt is commonly used in various processes such as die or cast, desiccant in building materials, immobilize casts, tablet excipient, an impression material in dentistry and many more. The chemical formula of graphite powder is CaSO4, in its purest form, which is non elastic in nature despite being soft and flexible. Owing to its great advantages, graphite powder in today’s date is being highly used in the construction industry. Thus, the increment in the expenditure made by several governments in the construction industry is forecasted to bring lucrative opportunities for the market in the assessment period. By 2030, the global construction industry expenditure is expected to propel to USD 18 trillion.

The graphite powder market is segmented and analyzed for demand and supply by application into refractories, lubricants & crucibles, foundry facing, batteries, and others. Out of these the batteries segment is projected to garner the highest revenue by 2031, owing to the increased demand of batteries in the upcoming years. As per recent statistics, it is being revealed that the global demand of batteries is projected to rise from 190 GWh in 2020 to 2,000 GWh in 2030. Also, the growth in production of lithium-ion polymer (LIP) battery to balance the equation of demand and supply of electric vehicles is anticipated to bolster the market growth. As per recent estimates, the global LIP production is expected to rise from 500 GWh in 2020 to 1,500 GWh in 2025.

Regionally, the global graphite powder market is studied into five major regions including North America, Europe, Asia Pacific, Latin America and Middle East & Africa region. Amongst these, the market in Asia Pacific is projected to hold the largest market share by the end of 2031. This region is expected to garner the highest revenue owing to a burgeoning population and rapid industrialization. According to the World Bank data, 61% of the total population of East Asia and the Pacific lived in urban areas in 2021. In South Asia, however, around 35% of the total population was settled in urban areas during the same period. Also, the rising sales and production of vehicles in Asia Pacific is expected to be another growth factor for the expansion of the graphite powder market. As per data by the International Organization of Motor Vehicle Manufacturers, the production of vehicles in the Asia-Oceania region was 46,732,785 units, whereas the sales of vehicles were accounted for at 42,663,736 in the year 2021. 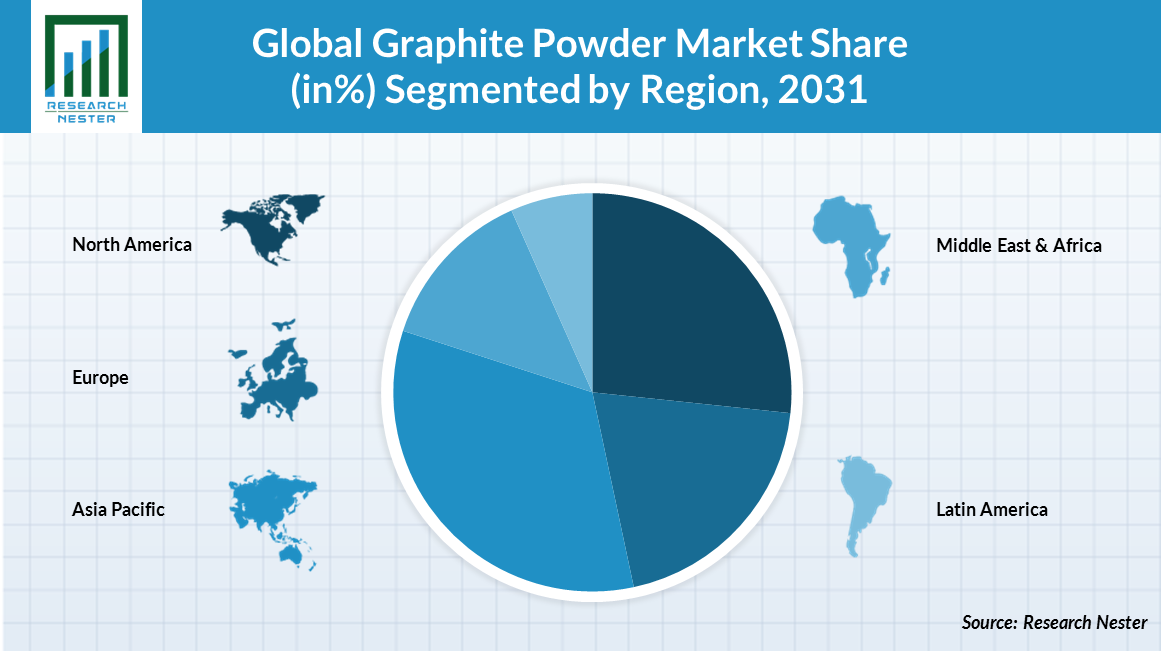 The global graphite powder market is further classified on the basis of region as follows:

Our in-depth analysis of the global graphite powder market includes the following segments:

What are the major factors driving the growth of the graphite powder market?

The expansion of construction and manufacturing industry along with the rising demand of electric vehicles and increased steel production are some of the factors that are expected to propel the market growth in the forecast period.

What would be the CAGR of graphite powder market over the forecast period?

What are the challenges affecting the graphite powder market growth?

The unbalanced equation of supply and demand of steel coupled with additional expenses incurred at several stages and stringent rules by government are some of the factors that are expected to hamper the market growth.

Which region will provide more business opportunities for growth of graphite powder market in future?

Who are the major players dominating the graphite powder market?

What are the segments in the graphite powder market?

The market is segmented by form, product type, application, and by region.

Which segment captures the largest market size in application in the graphite powder market?

The batteries segment is anticipated to garner the largest market size by the end of 2031 and display significant growth opportunities.