The growth of the global golf cart market is thriving on the back of the growing opportunities that is arising from the rising adoption of golf cart from different end user industries including airports, resorts, hospitals, stadiums, railways and others, coupled with factors such as the increasing adoption of electric carts on the back of growing stringent norms for the environment and increasing regulation for vehicular emission, and the rising demand from several developing regions around the world. The rapid growth observed in the hospitality and tourism industry is helping significantly for the greater adoption of golf carts for short distance travel in hospitality and tourism industry. On the other hand, growing government initiatives for reducing vehicular emissions is further adding up to the opportunity for the rising demand of golf carts, as most of the golf carts are primarily battery driven.

The global golf cart market reached a value of USD 1610 million in the year 2018 and is expected to garner a value of USD 2935.5 million by the end of 2027 by registering a CAGR of 6.9% across the globe over the forecast period 2020-2027. Further, the worldwide market of golf cart is anticipated to achieve an absolute $ opportunity of USD 1096.8 million throughout the forecast period.

The global golf cart market is segmented by regions into North America, Latin America, Europe, Asia Pacific and Middle East and Africa. Among these regions, the market of North America golf cart is driven by nations such as U.S. and Canada, where U.S. held the dominant market share of 56% during 2018. Increasing usage of golf carts in commercial applications, such as sport clubs, airports, resorts, large private properties and others, coupled with the presence of several key players in the region. Additionally, the market of golf carts in North America, which held a share of 42.65% in the year 2018, is expected to expand by observing the growth rate of 1.54x over the forecast period, which in turn is estimated to have a positive effect on the demand for golf carts in the long run. 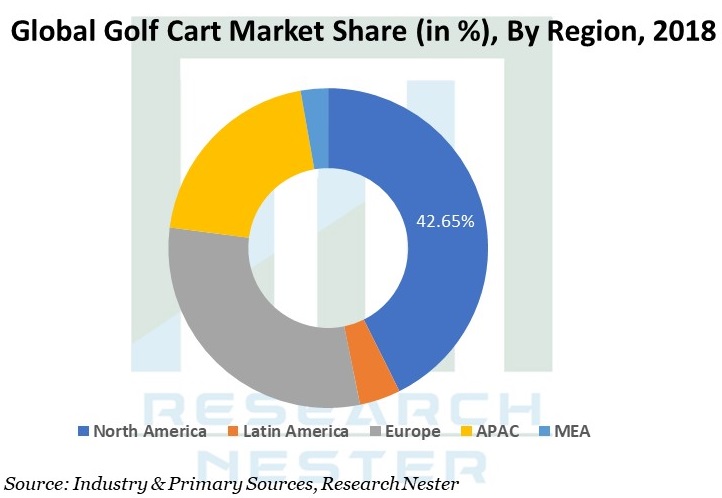 The global golf cart market has been segmented on the basis of product type into electric, gasoline and solar. Electric segment with 46.90% share in the year 2018, occupies the largest market of golf carts across the globe. Additionally, the electric segment is anticipated to cross a value of USD 1426.1 million by the end of 2027 by registering the highest CAGR of 7.3% over the forecast period. Further, the solar segment is anticipated to grow at a significant CAGR of 7.0% throughout the forecast period. 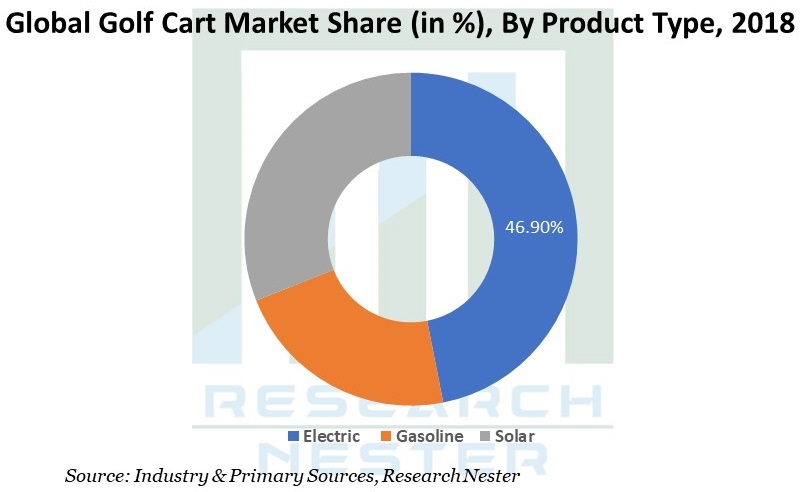 Over the past few years, an increasing use of golf carts has been observed at airports, golf clubs, hospitals, railway stations, college campuses, sports events and housing projects as the golf carts offer substantial environmental advantages over conventional energy driven vehicles. Moreover, golf carts are evolving as a critical part of various industries for internal transportation, which is raising the need of the manufacturers of golf carts to produce a greater number of golf carts in order to suffice the market demand. On the other hand, the government bodies across the globe are increasingly implementing regulations concerning the problem of vehicle emissions and their impact on the environment. Numerous countries, such as Germany, France and China are implementing laws regarding vehicular emissions and are making it compulsory for vehicle manufacturers to combat high emission from vehicles. Golf carts are known to be more environment friendly on the back of its low power consumption, weight and downsized engine. Moreover, utilization of golf carts for promotional and marketing activities by numerous companies, coupled with factors such as increase in car rental services across the globe, increasing use of golf cart by event management firms and the increasing global population are some of the factors anticipated to drive the growth of the global golf cart market.

Golf carts are highly priced and often require maintenance which raises the cost of maintenance of the vehicle. On the other hand, this type of vehicles is known to lack stability which makes them more susceptible to accidents. Additionally, presence of unorganized players in the market and the issues observed in the battery performance of golf carts are some of the factors anticipated to hamper the growth of the global golf cart market.

What are the major factors driving the growth of the Golf Cart market?

Increasing use of golf carts for short distance travel in the hospitality and tourism industry is one of the major factors that is driving the growth of the market.

What would be the CAGR of Golf Cart market over the forecast period?

Which region will provide more business opportunities for growth of Golf Cart market in future?

The market in Europe is anticipated to provide more business opportunities for growth over the coming years.

Who are the major players dominating in the Golf Cart market?

What are the major segments in the global golf cart market?

What can be the significant growth opportunity for the product type segment in the global golf cart market?

The electric segment, which is a sub-segment of product type segment, held the largest market share of 46.90% in the year 2018, and is anticipated to display significant growth opportunity.

High maintenance cost, product cost and susceptibility of golf carts to accidents are some of the major factors anticipated to act as a barrier towards the growth of the global golf cart market.