Extensive insights into the Growth of Submarines Market amidst COVID-19

A submarines is a watercraft which can stay submerged for extended periods and is deployed for multiple defense and commercial functions. They are considered crucial for a nation’s maritime security and are used for both offensive and defensive purposes. They are designed for the provision of greater agility and stealth capabilities. These watercrafts are armed with powerful weapons such as missiles and torpedoes. Submarines are considered as a part of naval fleets because of their multi-operational capability. Submarines play more crucial roles such as surveillance and reconnaissance, intelligence gathering, and patrolling and securing maritime borders and trade routes. The major players of the market are engaged in effective developments for making the functioning of submarines more effective, which further increase their usage in military and several other applications. Submarines were also utilized for inserting and abolishing the covert agents and military forces. Furthermore, they can convey cargo through the aggressive waters or act as supply vessels for the other submarines.

The global submarine market is anticipated to record a CAGR of around 5% over the forecast period i.e. 2019-2027. The market recorded a significant growth attributed to the modernization of the existing flotilla of several navies which can enhance the overall defense of developing and developed nations. Moreover, the nuclear-powered submarines are gaining prominence on account of rising fossil fuel prices and scarcity of renewable energy sources.

The submarine market is segmented based on type, platform and applications. By platform, submarine market is segmented into military and commercial, out of which the military segment is expected to hold the major market share as submarines are playing a vital role in fortifying the defense of a nation. On the basis of type, the global submarine market can be segmented into nuclear powered, ballistic missile, and diesel electric submarines, out of which, the nuclear-powered segment is estimated to hold the major share on account of its numerous advantages over the conventional underwater vessels. The ballistic missile could target enemies over long distances. On the basis of application, the submarine market is segmented into detection of oil resources, combat, marine environmental monitoring, scientific research, surveillance, and others, out of which, the combat segment is anticipated to hold the major share attributed to the high demand for unmanned undersea vehicles (UUVs) in naval warfare. CLICK TO DOWNLOAD FREE SAMPLE 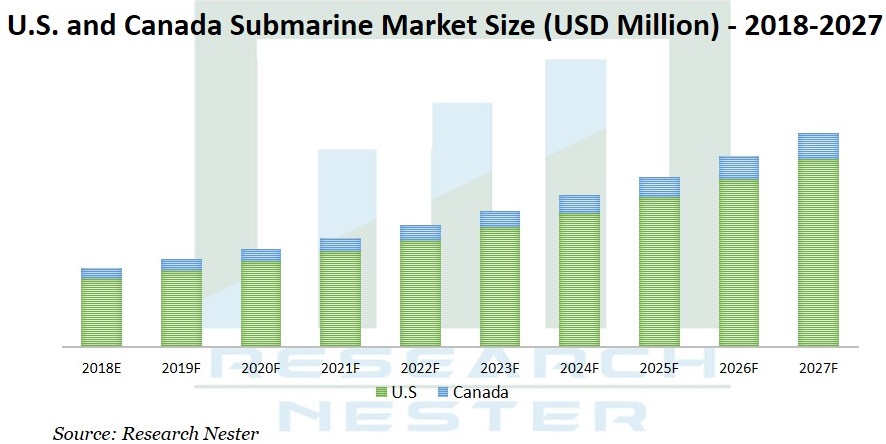 The increasing investments by the military and defense sectors of different countries, to build a strong military base by adopting the advanced technologies is the major factor driving the growth of submarines market. The growing arms race among the countries of the world and increasing inclination towards modernizing their naval bases, are also driving the market growth. There is a need to provide naval forces with increased capabilities pertaining to maritime security. All these factors contribute to drive the growth of submarine market.

Rising transnational terrorism and growing arms race among countries are the primary factors driving the growth of the global submarine market. With the growing number of conflicts involving maritime borders and trade routes, more and more countries are trying to improve their underwater combat skills. To obtain military supremacy, countries are increasingly focusing on developing high end submarines using the latest technologies, which subsequently drive the market growth.

Submarines form the centerpiece of naval fleets, attributed to their multi-operational capabilities and the ability to complement other strategic resources. Li-ion batteries can store up to 100% greater energy than lead acid batteries. They can be fully charged at a faster rate. The performance of these batteries is consistently fair even in low levels of charge. Additionally, these batteries can also be recharged at sea by diving and have minimal need for maintenance. This will in turn, result in the integration of lithium-ion (Li-ion) batteries in submarines, which will be one of the major factor driving the growth of submarine market.

The growth of submarine market is restricted by the costs associated with the refit and maintenance and proliferation of nuclear weapons.

On the basis of region, the submarine market is segmented into five major regions including North America, Europe, Asia Pacific, Latin America, and Middle East & Africa.

The North America submarine market is anticipated to witness a fast growth over the forecast period. This growth is on the account of high military spending of the United States and the aggressive procurement of submarines, coupled with the increased focus on unmanned underwater vehicles. Moreover, the development of advanced submarines and the focus of the United States on procuring next-generation submarines are the main reasons for the high growth of the submarine market in this region. Furthermore, increasing focus on the Virginia-class submarines that are being built by the US, may contribute to the strong growth of the market in the region during the forecast period.

Global submarine market is further classified on the basis of region as follows: