Naval combat vessels are warships used by a navy for naval warfare and they differ from civilian ships by construction and purpose. They are designed for combat with submarines or aircraft and can accomplish other missions related to counter-narcotics operations and maritime interdiction operations (MIO). The increase in next-generation naval systems, such as unmanned underwater vehicles (UUVs) is driving revolutionary study in artificial intelligence (AI) underwater communications, autonomous navigation, and unmanned swarm technologies. The effect of huge spending on developing AI for undersea structures signifies the paramount change in military sea power since the introduction of nuclear-powered vessels.

The naval combat vessels market is anticipated to attain a notable CAGR during the forecast period, i.e., 2020-2028. The market is segmented by vessel type, mode of propulsion, and region. Based on the mode of propulsion, the nuclear-powered market segment is projected to witness the largest demand during the forecast period, owing to the need for flexible power output and a long duration of operation before refueling. Further, all the fuel is confined within the nuclear reactor, so cargo or supplies space is not taken up by fuel, neither any space is taken up by exhaust stacks or combustion air intakes. 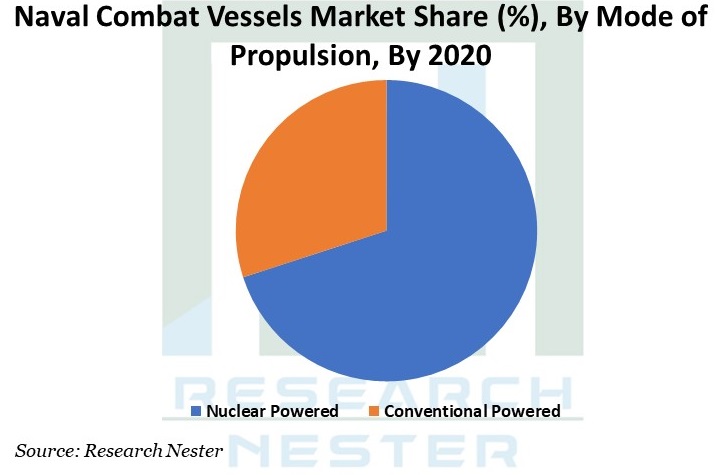 They tend to provide humanitarian relief, emergency medical care, and assist in combating smuggling, piracy, and terrorism. This has resulted in the constant evolution of the role of naval vessels and surface combatants. The shifting trend has driven manufacturers to develop more vessels with strategic sea-lift and amphibious operations abilities, facilitating several vessels to serve more than one role.CLICK TO DOWNLOAD SAMPLE REPORT

Additionally, rising internal terrorism in various parts of the globe, growing expenditure on naval combat vessels by emerging economies in the Asia Pacific region, such as India and China, rising need for modernization of naval combat systems, and increasing production of the unmanned underwater vehicles, are expected to bolster the market growth in the forecast period.

A progressive nation is the outcome of integrated actions of its government and people. The government’s willingness to spend on its country’s safety surely affects the global naval combat vessels market.
At the same time, the government needs huge funds to invest on combat vessels, which, if not present with the government, might hamper the overall market.

Our in-depth analysis of the naval combat vessels market includes the following segments:

By Mode Of Propulsion

North America is estimated to account for the largest market share owing to the growing  incorporation of advanced combat systems into naval vessels and increasing government spending to ensure a powerful defense system globally. The US’s dominance in the naval vessels market is swayed by the country’s affinity for unconventional military platforms to maintain an edge over its opponents. The country is currently undertaking multiple high-value programs to acquire new-generation naval vessels. Also, the US is home to most of the major companies in the market.

Europe is projected to witness significant growth in the forecast period owing to increasing demand for naval combat vessels. The Asia Pacific region is followed by the North American region in the global naval combat vessels market. This is primarily attributed to the increase in government spending on defense equipment in countries, such as India, China, and North Korea, and due to the developing need for warfare ships and frigates, especially in China and Japan.

In recent years, China has overtaken the U.S. in numbers of naval warships yet, China’s open-ocean naval capability lags far behind the U.S. navy warships. Both nations are putting noteworthy efforts into accumulating autonomous and semi-autonomous platforms to their surface and subsurface naval forces.

The naval combat vessels market is further classified based on region as follows: