Poultry are referred to all those domestic birds which are kept by humans primarily for their eggs and meat among others. Poultry processing is referred to as the preparation of meat from the poultry for consumption by humans.

Poultry meat is treated as a major source of consumable animal protein, and chickens and turkeys are the most common sources of poultry meat, out of all other commercially available poultry meats. Few other sources include ducks, geese, pigeons, quails, and others.

The processing of poultry meat is a five stage process: stunning and killing, scalding, defeathering, removal of heads and legs, and lastly, evisceration and inspection. 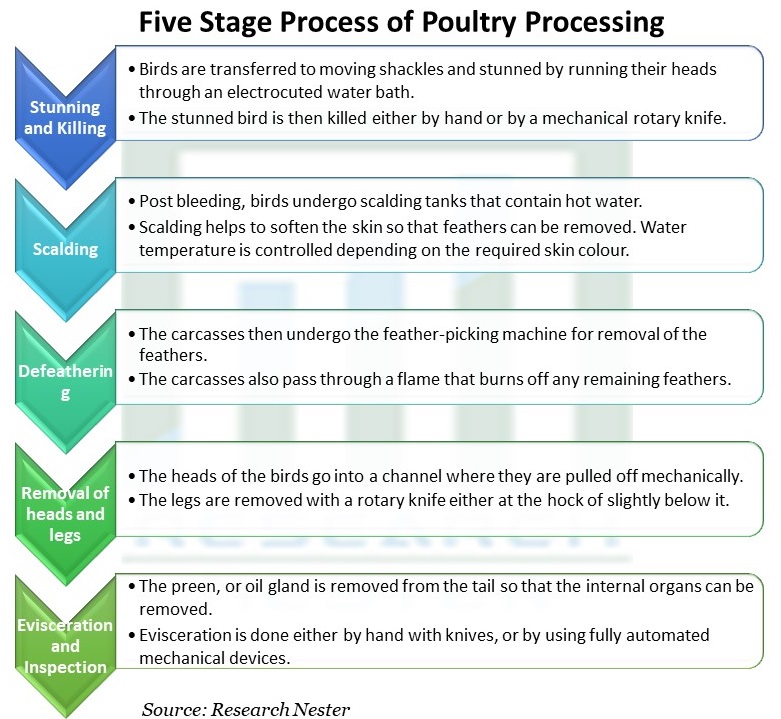 The market of poultry processing is observing vibrant growth on account of growing consumption of poultry products, coupled with rising awareness for animal protein rich diet. Additional growing demand for processed and convenience goods are also contributing towards the growth of the poultry processing market. According to The National Chicken Council, which is the trade association for companies raising broiler chickens in Washington, D.C., stated that per capita consumption of total poultry products increased from 98.8 lbs in 2010 to 110 lbs in 2018 with a growth rate of 1.11x, and is further estimated to reach 111.8lbs by 2020.  CLICK TO DOWNLOAD SAMPLE REPORT 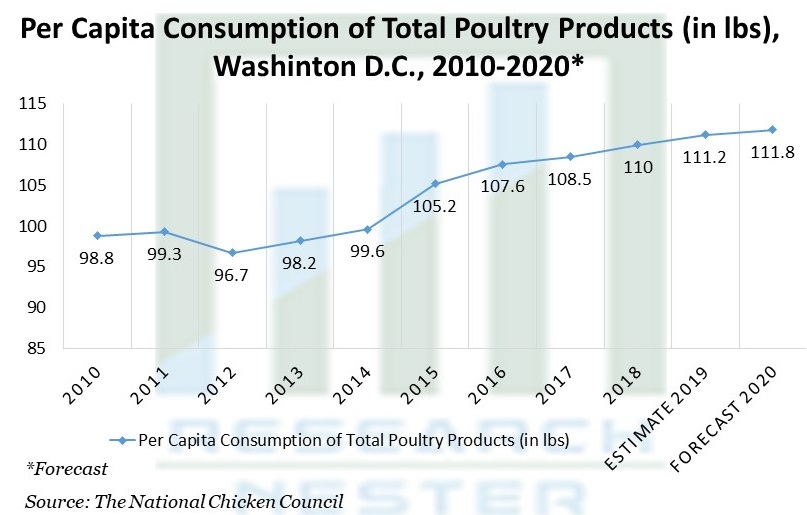 The market is anticipated to record robust CAGR throughout the forecast period, i.e. 2019-2027. The poultry processing market is segmented by type into chicken meat, turkey meat and eggs, out of which, chicken meat segment is anticipated to hold largest market share on account of growing production of chicken worldwide, and being the largest producing component amongst the other two components. According to the Food and Agriculture Organization (FAO), production of chicken around the globe grew from around 113 million tonnes in the year 2014 to 122 million tonnes in the year 2017, with a growth rate of 1.08x. 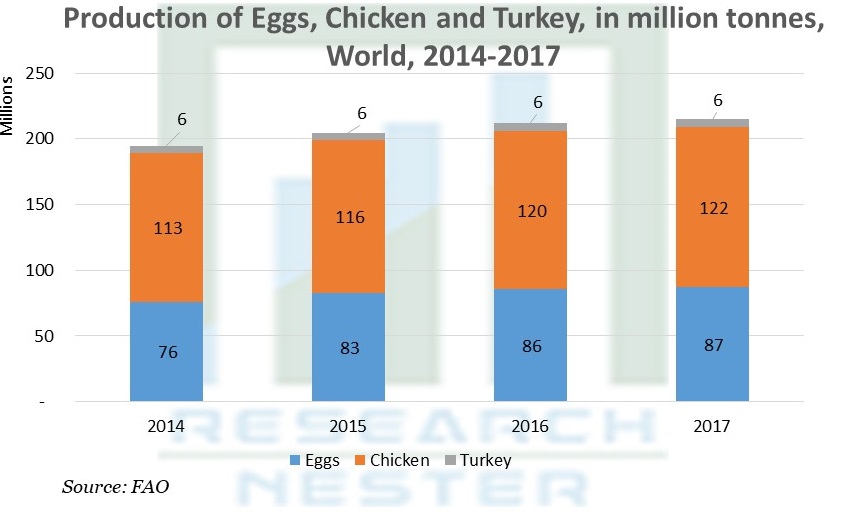 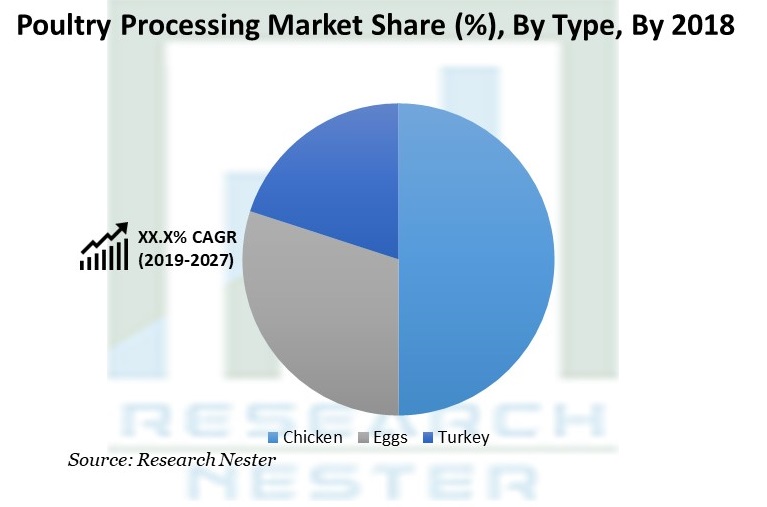 According to the World Health Organization, around 45% of deaths among children under 5 years of age are linked to undernutrition. Human body need to consume sufficient amount of protein on a daily basis. Lacking of insufficient intake of protein may cause health complications, for instance, Kwashiorkor, Marasmus, impaired mental health, Oedema, organ failure and weak immune system among others. Owing to such factors, the consumption of protein rich diet have grown multifold. According to United States Department of Agriculture (USDA), poultry meats are known to have around 11 grams of protein per 100grams. Additionally, chicken meats are known to have around 27 grams of protein per 100 grams, followed by cooked duck meat, with around 19 grams of protein per 100 grams. Overall, poultry meat are also known for greater amount of monounsaturated fatty acids, which is why they are promoted by nutritionist for intake in a diet. The rising awareness for protein rich diets, coupled with higher nutritional value of poultry meats, is raising the demand for increasing consumption of poultry meats, which is anticipated to contribute significantly towards the growth of the poultry processing market. 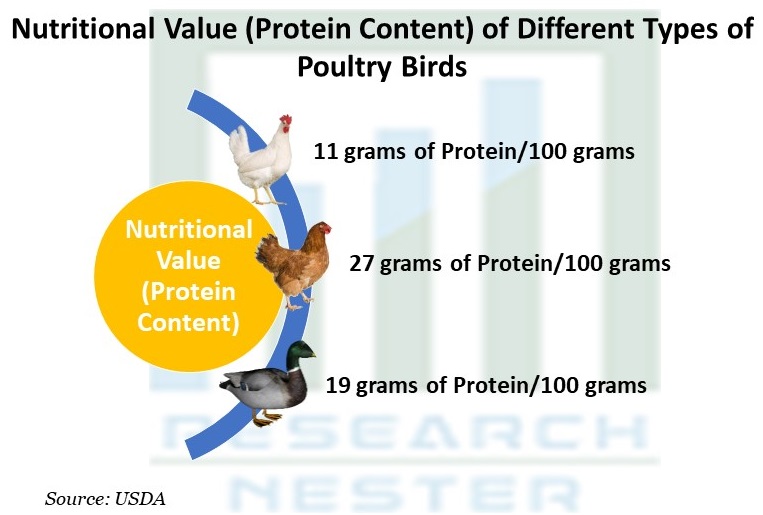 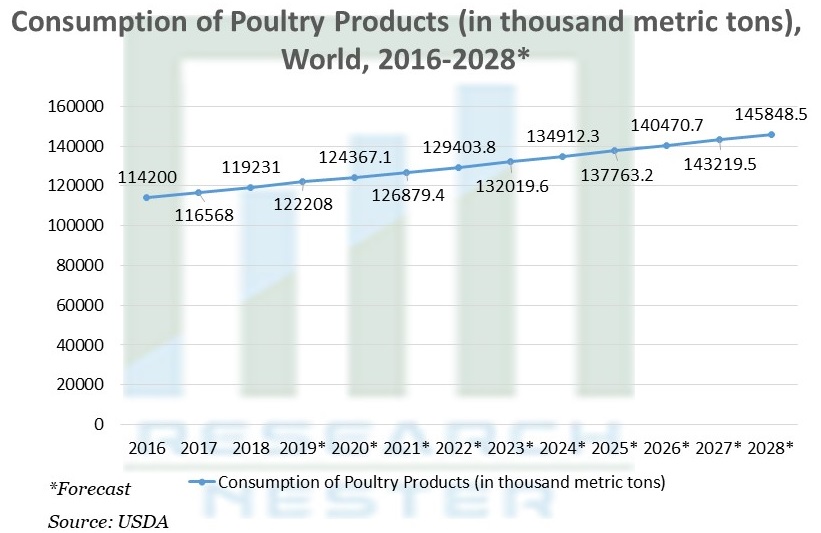 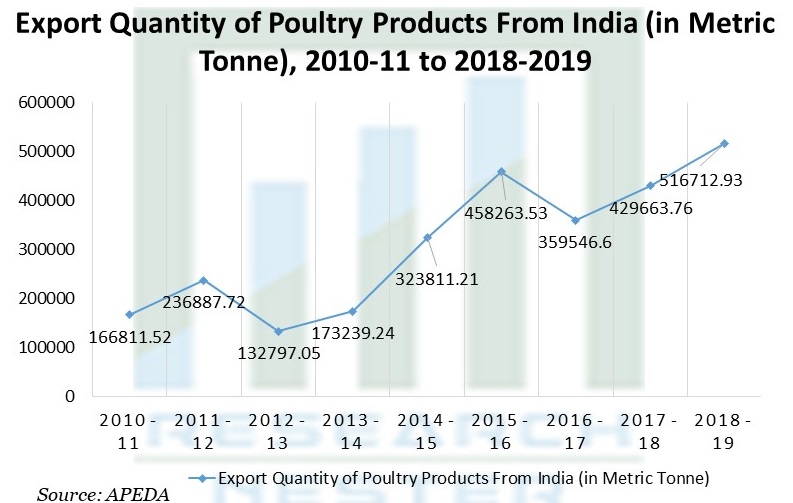 Fear of Damage Occurring Due To Bird Flu

Sudden outbreak of bird flu (avian influenza) across economies affects the processing of poultry. Bird flu not only infects birds, but also humans and other animals, which is why it is also known as a deadly disease amongst all other type of diseases. An outbreak of bird flu requires the destruction of live birds affected by the flu, which is anticipated to act as a barrier to the growth of the poultry processing market.

Our in-depth analysis of the poultry processing market includes the following segments:

North America is expected to hold significant market share on the back of rising demand for low calorie meat and increasing research and development in the production of processed poultry and meat industry. Moreover, concern for health and other diseases is raising the demand for organic poultry meat, which is also anticipated to contribute significantly towards the growth of the market in the region.

Additionally, Asia-Pacific is expected to gain significant market share on the back of increasing population and the changing lifestyle in the consumption of meat and meat products. Shifting trend amongst consumers for various non-veg recipes is also raising the demand for seasoned poultry meats and associated by products, for instance chicken heart and liver among others. Additionally, the region is also known to be the world’s largest producer of poultry products. All of these factors are anticipated to help gain significant market share of the poultry processing market in the region over the forecast period. According to the FAO, total production of poultry products in Asia-Pacific grew from 87530561 tonnes in the year 2014 to 100468822 tonnes in the year 2017. 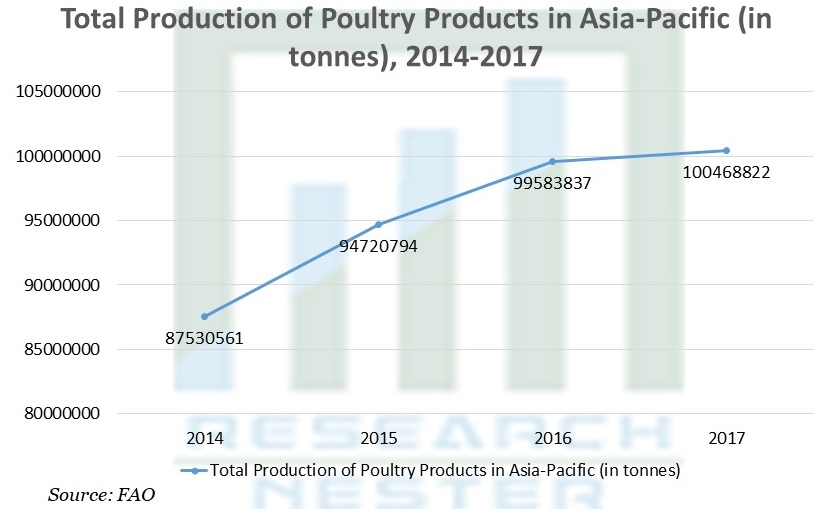 The poultry processing market is further classified on the basis of region as follows:

1) What are the major factors driving the growth of the poultry processing market?

Ans: Increasing awareness for protein rich diet amongst consumers, which is also raising the consumption of protein, is one of the major factors that is driving the growth of the market.

2) What would be the CAGR of poultry processing market over the forecast period?

4) Which region will provide more business opportunities for growth of poultry processing market in future?

Ans: The market in Asia Pacific is anticipated to display significant business opportunities in the future owing to the changing lifestyle of the consumers and the rising preference for seasoned poultry meats.

5) Who are the major players dominating the poultry processing market?

7) What are the major segments in the global poultry processing market?

8) What can be the significant growth opportunity for the type segment in the poultry processing market?

Ans: The chicken meat segment, which is a sub-segment of the type segment, is anticipated to hold the largest market share during the forecast period, backed by the rising production of chicken globally.

Ans: The sudden outbreak of diseases, such as bird flu, which leads to the destruction of live birds, is anticipated to act as a barrier towards the growth of the global poultry processing market.