Extensive insights into the Growth of Nanopesticides Market amidst COVID-19

Nanopesticides are pesticides whose formulation uses nanotechnology to improve its characteristics. With utilization characteristics similar to pesticides, nanopesticides contain nanoparticles, which preferably exceeds the 100nm size limit as recommended for regulatory purposes by various governmental organizations. Upon continuous identification of research gaps and future priorities in nanopesticides, polymer-based formulations have received the greatest attention, followed by formulations containing inorganic nanoparticles and nanoemulsions.

The use of nanopesticides suggests a significant reduction in the impact of the active substances of plant protection products on the environment and an improvement in quality and quantity of the yields. Although, much of the research in nanopesticides is in the developmental stage, the future of the product is linked to the balance between their advantages in terms of increasing efficiency and reducing the use and impact of plant protection products, combined with their disadvantages related to contamination of nanoparticles by people and the environment.

Nanopesticides find varied usage in crop protection, for instance seed treatment, storage of fresh fruits and vegetables, crops, feed and fodder among others.

The nanopesticides market is observing vibrant growth on account of growing demand for food crop production around the globe, in order to achieve the target indicator 2.1.1 of the Sustainable Development Goals (SDG) framework, and mitigate the demand gap. According to the statistics of the United Nations Development Program (UNDP), the number of undernourished people reached 821 million in 2017. 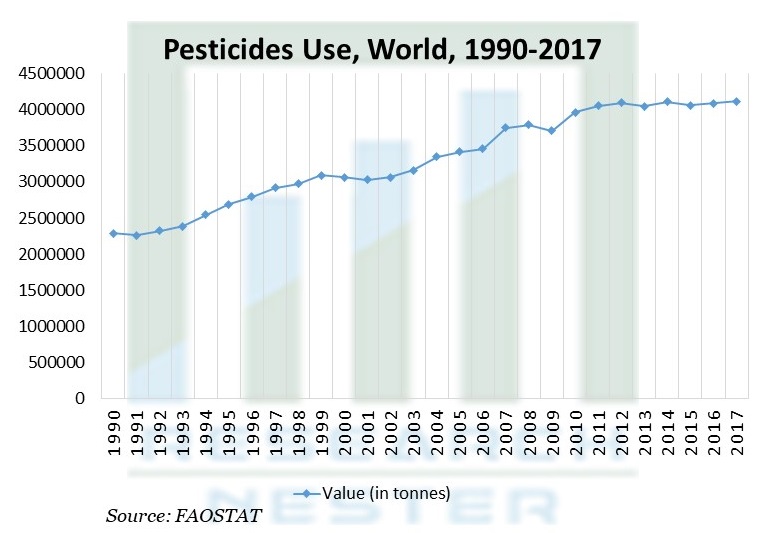 The market is anticipated to record robust CAGR throughout the forecast period, i.e. 2019-2027. The nanopesticides market is segmented by utility into food crop and industrial crop, out of which, food crop segment is anticipated to hold largest market share on the back of growing need for cultivation of food crops, so as to mitigate the demand supply gap around the globe. By application, the nanopesticides market is segmented into production, protection, harvesting and packaging, out of which, harvesting segment is anticipated to gain significant market share owing to the growing need for controlling global food loss index (GFLI) occurred due to issues faced in the supply chain, i.e. from producer to retail level. According to FAO, around 40% of losses occur at post-harvest and processing levels of developing countries and more than 40% losses happen at retail and consumer levels in industrialized countries. 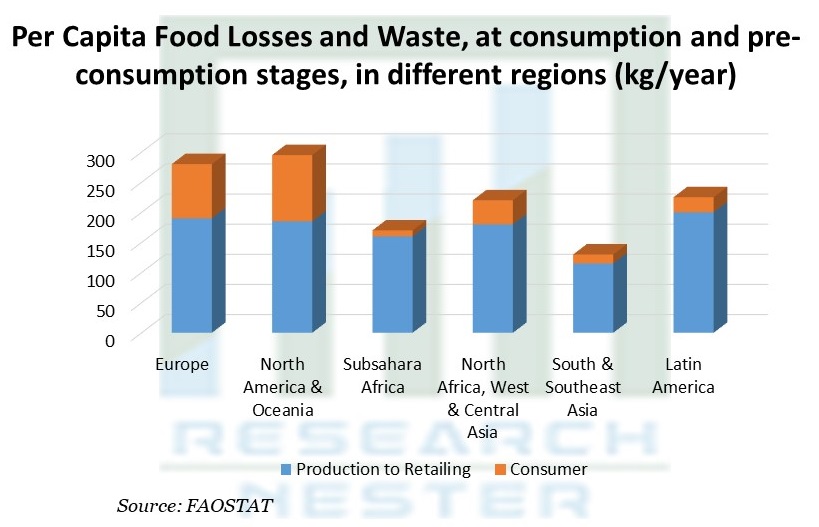 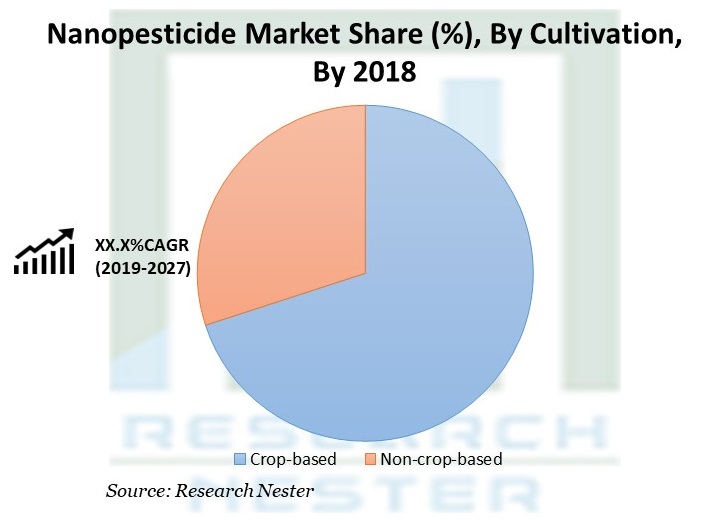 According to the FAO, food losses and waste amounts to roughly $680 billion USD in industrialized countries and $310 billion USD in developing countries. By quantity, both industrialized and developing countries dissipate roughly the same quantities of food, i.e. 670 and 630 million tonnes respectively. The statistics describes the growing concern for food wastes, the impact of which is observed on the environment, society and livelihoods of people. Food wastes and loss generated during the various stages of the supply chain process is raising the demand for the utilization of nanopesticides amongst crop producers and suppliers, so as to minimize the waste and gain control on the GFLI. 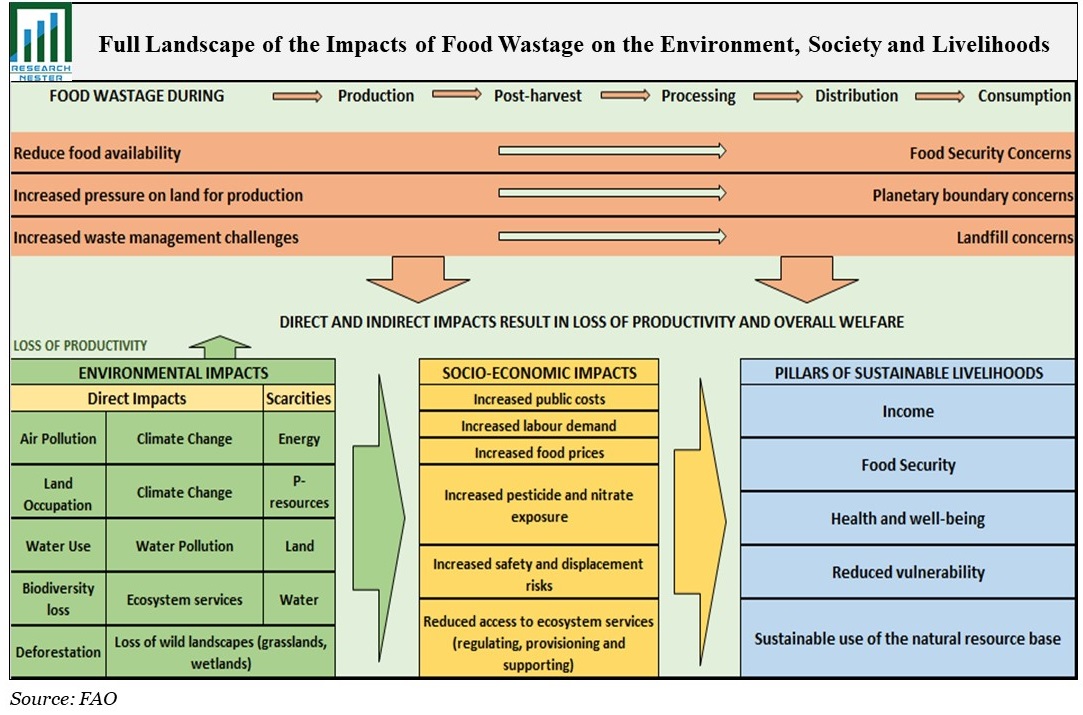 There is a rising demand among consumers for the consumption of fresh foods and vegetables around the globe. The demand also suffices the need for seasoned and unseasoned products to be made available around the globe throughout the year. Agro-economic countries are therefore focusing on exporting fresh fruits and vegetables to mitigate the demand gap, which is raising the demand for the use of nanopesticides in packaging of these fresh foods to minimize loss in the supply chain and maintain the freshness in the products. According to the Agricultural and Processed Food Products Export Development Authority (APEDA), Government of India (GOI), exports of fresh fruits and vegetables grew from 0.67 billion USD in 2010-11 to 1.30 billion USD in 2018-19. Also, the export value have already reached 0.21 billion USD until the month of May for 2019-20. 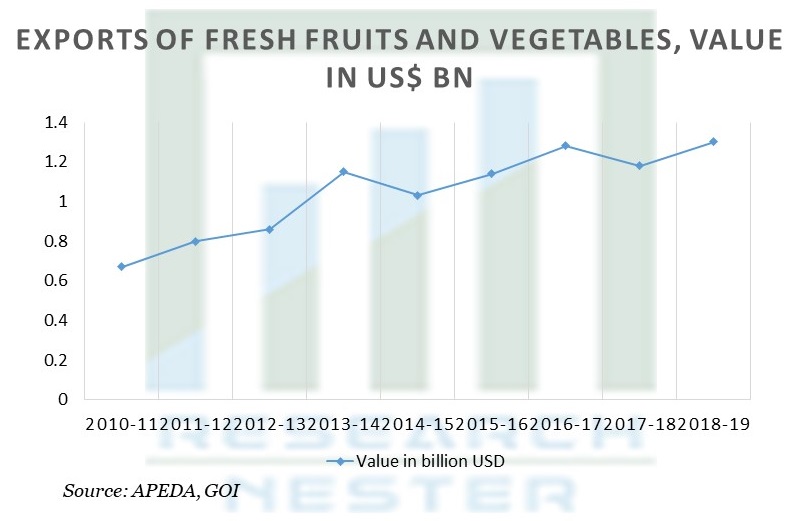 Concerns For Food Safety, Ban On Pesticides And Restrictions In Utilization In Many Economies

Many economies of the world have banned the use of pesticides owing to its negative effects on the livelihood of the people. Nations have developed numerous safety standards to overcome the issue and create differentiation in its class based on the vulnerability of the chemicals used in the pesticides. For instance, the United States Department of Agriculture have developed the Pesticide Data Program (PDP), which is a national pesticide residue monitoring program, producing the most comprehensive pesticide residue database in the U.S. Additionally, Government of India has adopted Integrated Pest Management (IPM) program as cardinal principle and main plank of plant protection in the overall crop production program since 1985. The Directorate of Plant Protection, Quarantine & Storage of the Government of India have recently updated in the month of March’19 the list of pesticides which are banned, refused for registration and restricted in use.

Our in-depth analysis of the nanopesticide market includes the following segments:

Asia-Pacific is expected to hold largest market share on the back of extensive use of pesticides in agricultural products in the region. Furthermore, the region is known for being the largest producer of many food and cash crops, for instance, China and India are known for being the largest producers of cotton. Moreover, higher demand for food grains, limited availability of arable land, elevating exports, growth in horticulture and floriculture, and others are some of the factors raising the demand for nanopesticides among producers in the region.

The nanopesticide market is further classified on the basis of region as follows:

Currently with the presence of only one manufacturer being Migrow agro products that is involved in manufacturing nanopesticides. This market is relatively new and is expected to see more number of players starting their operations towards this field. Furthermore, it is also estimated that top featured companies dominating the market of biopesticides, such as Marrone Bio Innovations, Bioworks Inc., Valent Biosciences LLC, Andermatt Biocontrol AG, Stockton, Bayer AG, Camson Bio Technologies Ltd, AMVAC Chemical Corporation, Corteva, IsAgro and others may expand their product portfolio for nanopesticides market in the near future.