The term “halal”, also spelled hallal or halaal, is described as permissible in the Islamic law. Halal foods refer to all those foods which are free from ingredients forbidden by the Islamic dietary law. These foods are prepared without using lard, alcohol, vanilla extract and others. Also, the law permits consumption of meat of halal animals, such as sheep, cattle and chicken, which are slaughtered by designated people, who follow specific set of practices, for instance, utterance of prayers prior to preparing these animals for later consumption. Moreover, halal foods also includes restrictions in the consumption of aquatic animals, carnivorous animals, pork or by-products of pork. 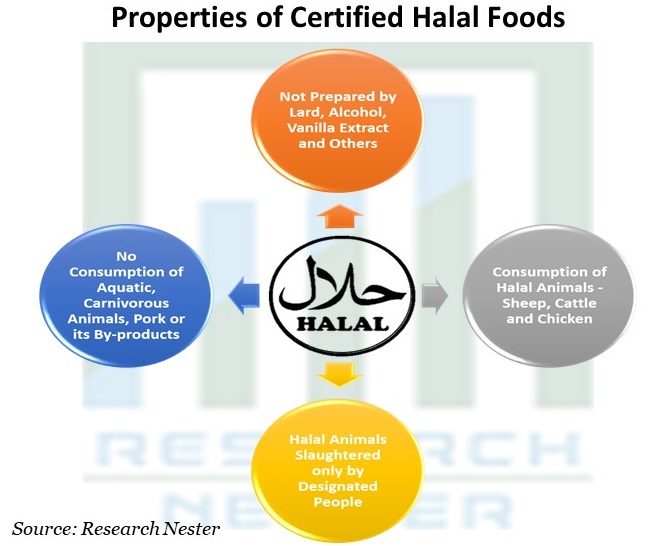 The halal food market is observing vibrant growth on account of growing Muslim population worldwide coupled with improvement in supply chain in the retail sector. Additionally, Muslim consumers are continuously influenced by the health benefits offered by halal food items, which is also raising the consumption of halal foods, along with growing acceptance among non-Islamic communities. With growing number of consumers preferring for halal foods, food producers are increasing the varieties that can be offered to the consumers. All of these notable factors are contributing significantly towards the growth of the halal food market. According to the statistics by Pew Research Center, the Muslim population was estimated at 1,619,356,945 persons in 2010 and is projected to reach 2,190,191,946 persons in 2030 amongst 232 countries around the globe. CLICK TO DOWNLOAD SAMPLE REPORT 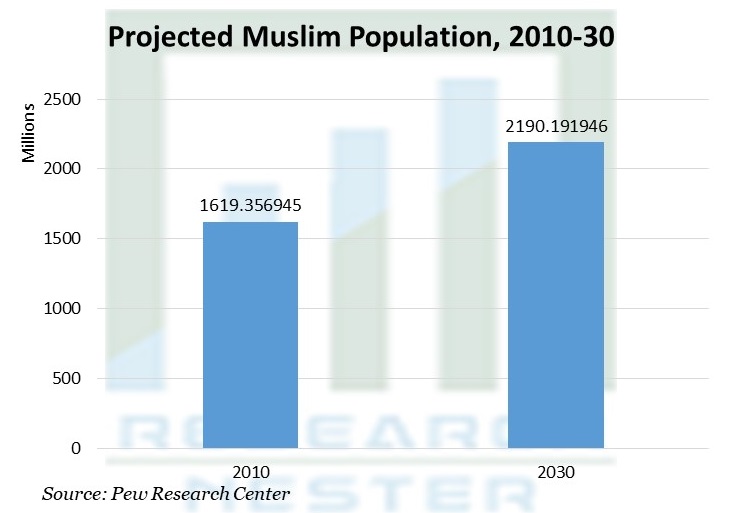 The market is anticipated to record a CAGR of around 10.9% throughout the forecast period, i.e. 2019-2027. The halal food market is segmented by product type into diary, meat, grain, vegan and others, out of which, meat segment is anticipated to hold largest market share owing to rising consumption of meat and meat products in the world. According to Organisation for Economic Co-operation and Development (OECD), total varieties of meat consumption around the globe grew from 179145 thousand tonnes in 2010 to 206753 thousand tonnes in 2018. 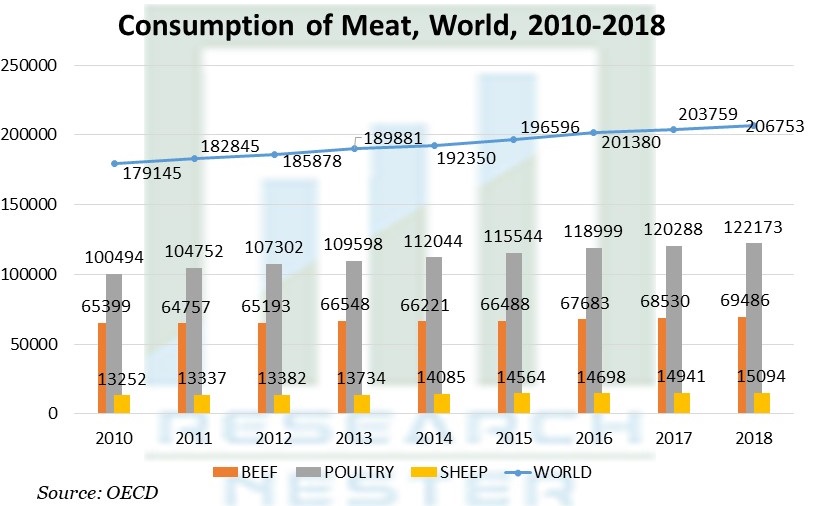 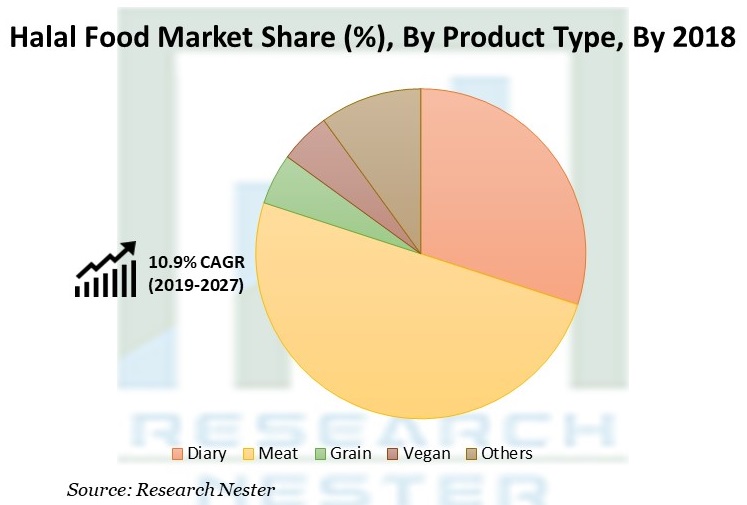 There are many similarities between halal foods and kosher foods. Kosher foods are usually preferred by the growing Jewish community, which is anticipated to be a prime consumer group for the halal food market. Additionally, unavailability of halal products in Jewish nations is anticipated to drive the growth of the halal food market over the forecast period. According to Jewish Virtual Library, Jewish population increased from 12,079,000 numbers in 1960 to 14,606,000 numbers in 2018. 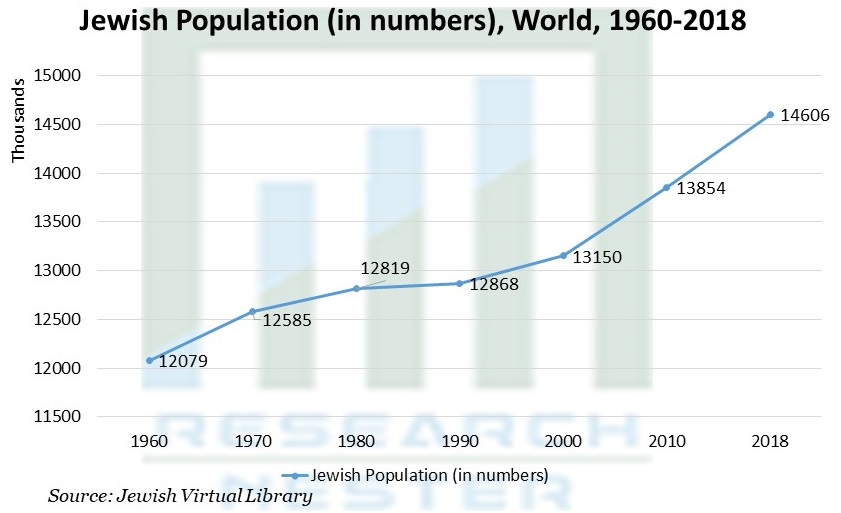 Various commercial food service establishments are increasing their product offering by including halal certified food products into their existing food category owing to increasing competition and growing food-away-from-home spends. All of these factors are anticipated to support the growth of the halal food market throughout the forecast period. According to Economic Research Service of the United States Department of Agriculture (USDA), food spending by U.S. consumers, businesses, and government entities totaled $1.74 trillion USD, out of which, food-away-from-home accounted for 54.4% of total food expenditures, during the year 2018. 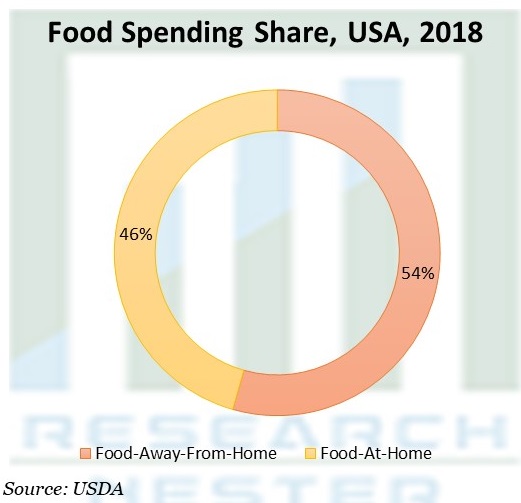 Our in-depth analysis of the halal food market includes the following segments:

Middle East and Asia Pacific is expected to hold significant market share on the back of growing Muslim population in the region. Furthermore, growing awareness for halal food products amongst the people, coupled with multi-cultural diversity and complexion amongst Southeast Asia nations is stimulating the development of world’s most advanced halal standards and certification agencies, which is anticipated to raise the demand for halal food products in the region. Additionally, presence of large number of Muslim and Jewish community nations in the region is also anticipated to propel the growth of the market during the forecast period.

The halal food market is further classified on the basis of region as follows: